“Onshape’s Branching and Merging has been a huge benefit for us because it’s made it easy for multiple people to quickly try out new ideas without affecting the original design.”

Although government buildings and many public places are mandated to be wheelchair-friendly, the lack of ramp or elevator access to private homes and businesses can make freedom of movement exceedingly difficult. Portable aluminum wheelchair ramps solve this problem, but they are often too large or clunky to fit in a car’s trunk – or too steep for a caregiver to safely push someone uphill.

Enter the Lift2Go, an “ultraportable” lightweight lift helping people in wheelchairs, scooters and other mobility aids travel up stairs. Developed by Canada-based Adaptive Concepts Ltd., the device is operated by a mechanical handcrank and requires no electricity or batteries.

“For accessing locations that are above two stairs – more than 16 inches – it’s very difficult to find portable, temporary solutions without a lot of deployment cost, time and effort,” says Adaptive Concepts CEO Graham Smith. “And with power wheelchairs becoming more powerful and capable, there has been a huge increase in the need to handle combined passenger/device loads of over 500 pounds. There really hasn’t been a good solution up until now.”

Smith says his market research for the Lift2Go included interviews with 130 accessibility stakeholders (people who need assistance and their caregivers), who most often talked about the need for “access with dignity.”

“Understandably, people want access to public and private spaces, but they want that access to be dignified, human and comfortable. And they don’t want to draw attention to themselves or feel like they are inconveniencing other people,” he says. 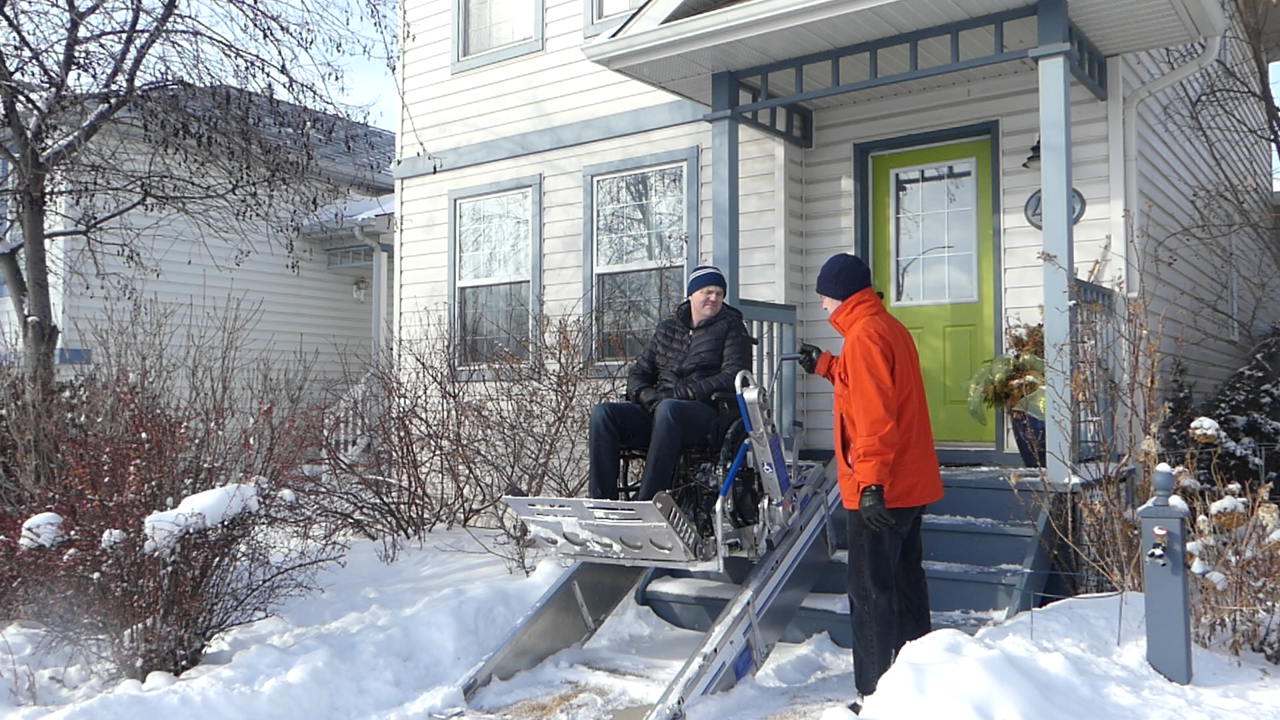 “Many people in wheelchairs feel an extreme sense of vulnerability when you tip them backwards because they have no means of protecting themselves if they fall. And in northern climates, as soon as there’s any ice or snow or freezing rain, going up stairs is extremely dangerous,” Smith adds. “So frankly, most of the time, the solution to the problem of ‘How do I get up a set of front steps or into the second-floor living room?’ is that you don't go.”

So how does an elderly, 5-foot-1-inch 110-pound caregiver transport a 300-pound person in a power wheelchair up the stairs? The Lift2Go’s proprietary mechanical handcrank system allows individuals to elevate a 750-pound wheelchair/passenger combination, up the steepest slope, with less than 10 pounds force in under 40 seconds.

“To put 10 pounds of force in perspective, it’s the same effort as picking up a one-gallon jug of milk,” Smith explains. “We did a great deal of testing to find out what was going to be ergonomically acceptable to women between ages 30-65, which is the primary demographic for caregivers.”

“Our customers are also very conscientious people and don’t want someone hurting their back while helping them. What we’re providing, for the very first time, is a modular snap-together frame that can be moved around by one person, and set up by one person, which is unprecedented for inclined platform lifts,” he adds.

The Lift2Go, which will be distributed in medical supply stores, is currently in Canadian market trials and is expected to be available in the United States in 2020. 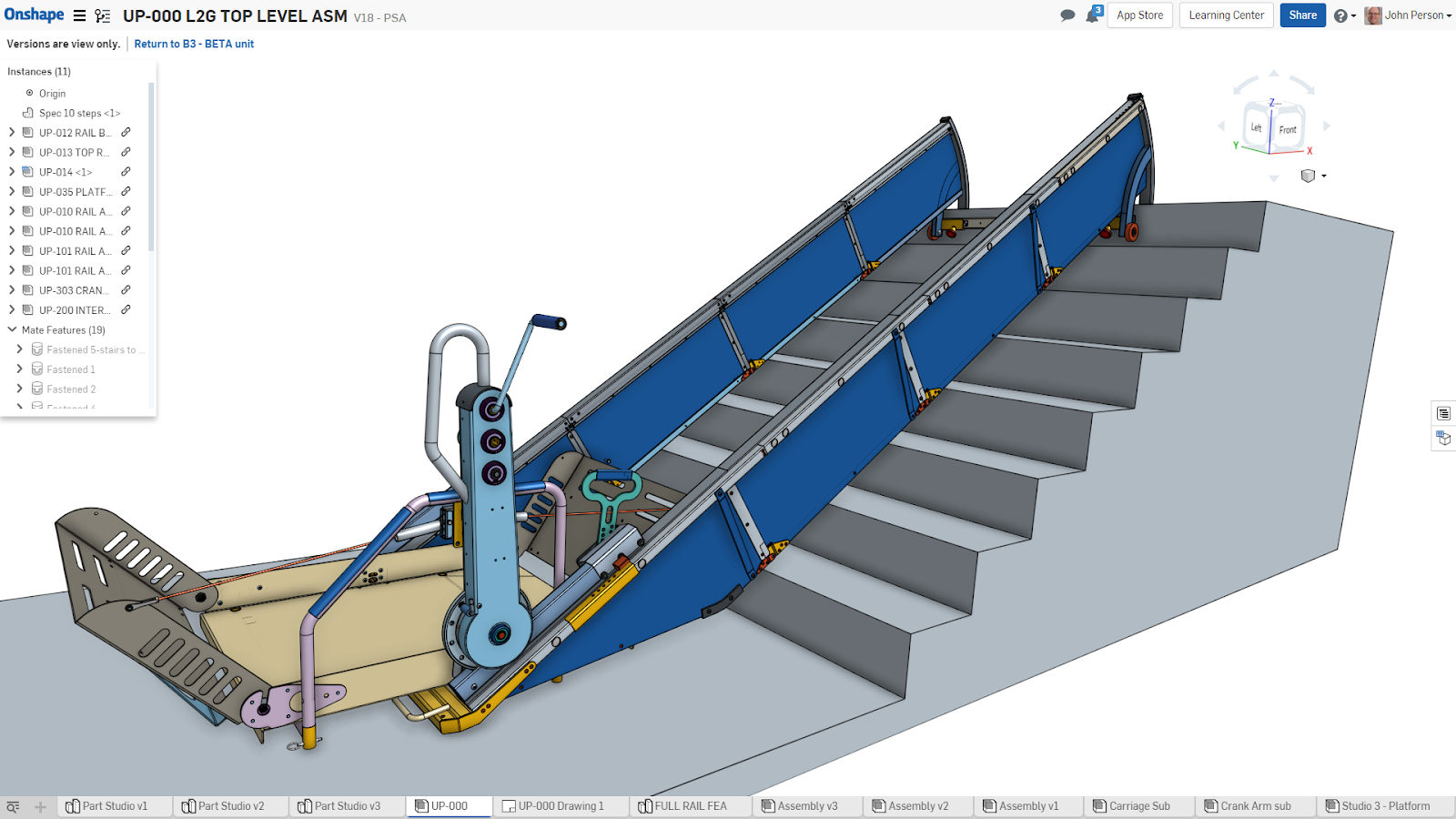 John Person, lead engineer at Adaptive Concepts, says he especially values Onshape’s branching and merging functionality, which allows engineers to explore different design ideas in their own branches and later merge the best elements from each into a final version.

“This has been a huge benefit for us because it’s made it easy for multiple people to quickly try out new ideas without affecting the original design,” Person says. “This approach has saved us a lot of time, effort and sweat.”

“There’s now a huge weight lifted from my shoulders that we never have to worry about losing data or people accidentally overwriting each other’s work,” he adds. “If occasionally, we go off the rails, we can just roll it back with the edit history and restore a previous version. So it’s all easy to manage.”

“We can now easily explore a dozen different design possibilities and go through them on an iterative, exploratory path,” echoes Smith. “Managing versions with a PDM system supports you well if you're at point A and you know you have to get to point B and you've got six people on the team and there is no uncertainty about what they need to do. But when you are doing the kind of project we're doing, which is creating new technology and groundbreaking products, you need to have a lot of flexibility.”

“The uncertain and unpredictable nature of our design problems means that we need to be able to iterate rapidly. So Onshape has been a big advantage for us,” he says. 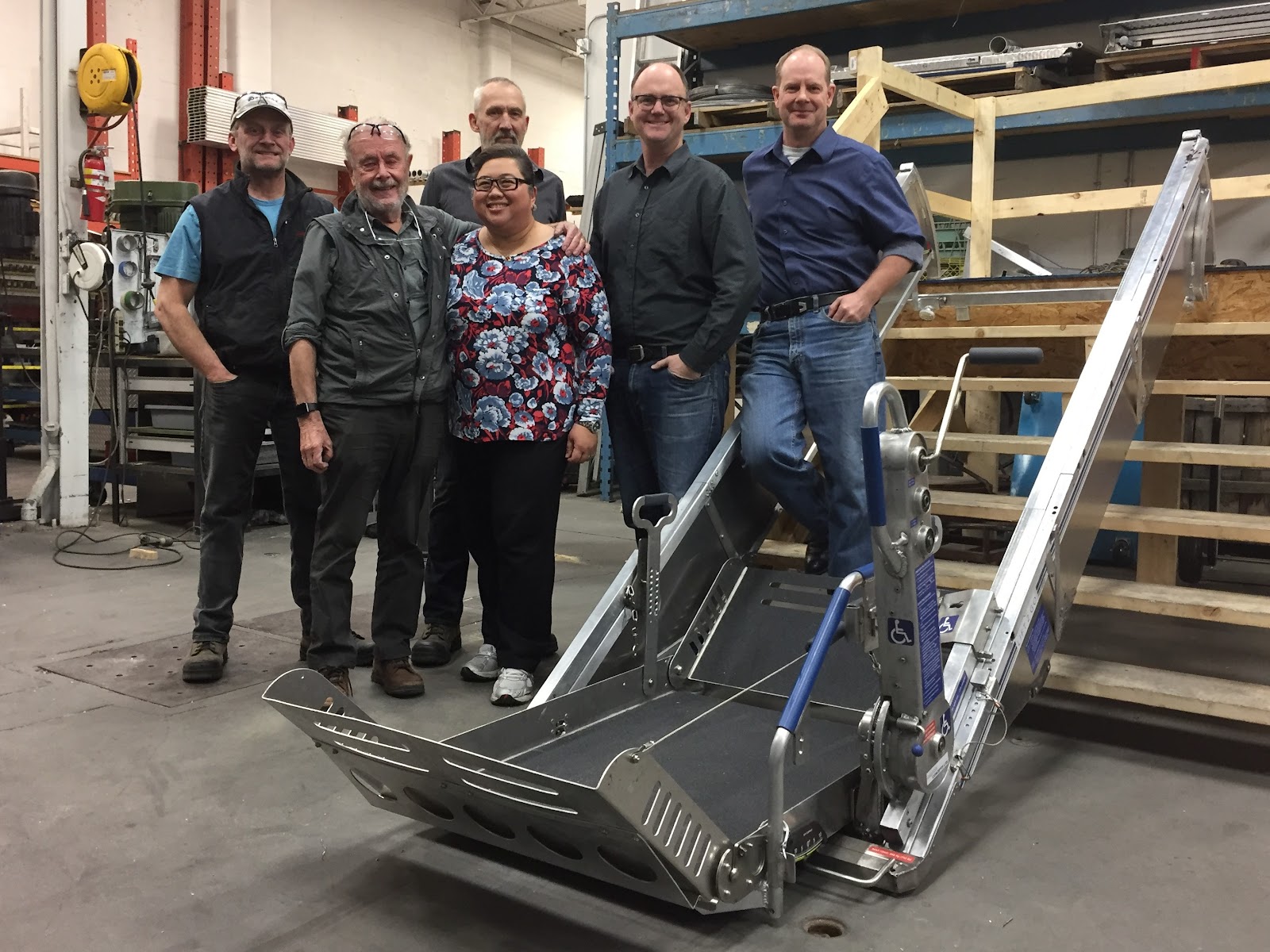 For their market research, the Adaptive Concepts team interviewed 130 wheelchair users and caregivers to determine the need for an ultraportable, easy-to-assemble mechanical lift.

Smith and Person, who have more than two decades of prior experience using SOLIDWORKS to design railroad platform lifts, say they find it liberating that Onshape eliminates the need for an add-on PDM system.

“If you're using a PDM system, the technology pushes you to use a process. And the people on your team have to constantly focus on making sure that process is followed,” says Smith. “In Onshape, you don’t have to think much about the process. The workflow supports us in achieving our design goals rather than impeding us.”

“Using a PDM system is a huge procedural thing that everyone has to be onboard with - and you have to have a whip-cracking CAD monitor to go around and make sure everyone's doing it right. The whole thing becomes extra overhead that you really don't want to deal with – especially in a small company, and especially when you're in a development trajectory. I’m glad that CAD has moved on,” Smith says.

Smith says he also appreciates the high level of attention he receives when he contacts Onshape Tech Support.

“If we have a concern or problem or suggestion, we don't expect that thing item to be solved instantly. But it really is nice to get an email back within hours that says, ‘Hey, we got this. We're on it.’ That kind of responsiveness is rare in this industry and is really a strong differentiator for Onshape,” he says.

“Just to compare that experience personally, I once put in a service request for SOLIDWORKS and four years later I got an email that my thing had been fixed,” adds Person. “It took four years! I'd totally forgotten about it and then thought, ‘Oh, yeah, that problem isn't a problem anymore, guys. But thanks for getting back to me.’"

“So Onshape is setting a new industry standard. It’s like we have our own company hotline,” he says.

Learn how companies of all sizes use modern CAD to eliminate design gridlock.

Request a demo of Onshape