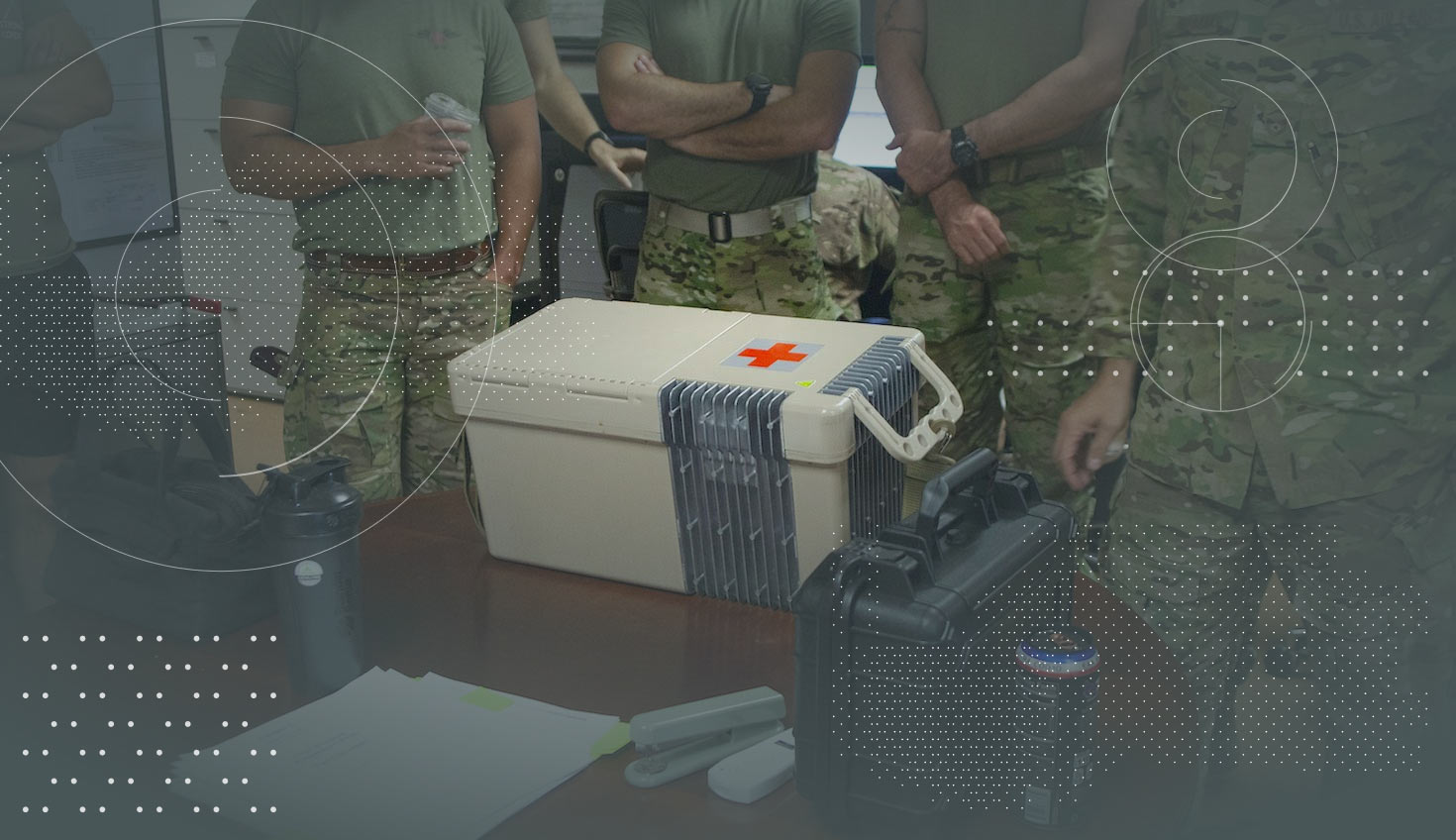 Because the military and the medical industry are often the first to benefit from new technologies and devices, it is surprising to learn of situations when low-tech solutions are the norm more often than not. One of the scenarios still dependent on old-fashioned solutions is the safe transportation of blood, vaccines, virus samples and temperature-controlled medications – all of which require a reliable cooling system.

“Everybody has their own workaround right now, but there is no reliable solution currently following all of the FDA’s best practices,” says Robert Futch, CTO of Delta Development. “These refrigeration units are not designed with medical device guidelines for transporting blood safely. When you’re in the middle of the desert in Afghanistan, you can’t predict how long ice or a cooling device will really last, or how much power it has left. But you definitely know it’s not going to stay cold forever.”

Delta Development is a Tucson-based R&D company specializing in military applications for cooling and heating systems in extreme environments. The product development company was contracted by the U.S. Air Force to design and manufacture the Autonomous Portable Refrigeration Unit (APRU) for deployment by medics on the battlefield.

Current military procedures require wounded troops needing blood to be evacuated by helicopter to the nearest base or field hospital. The APRU enables medics to replenish blood to patients faster on the ground. 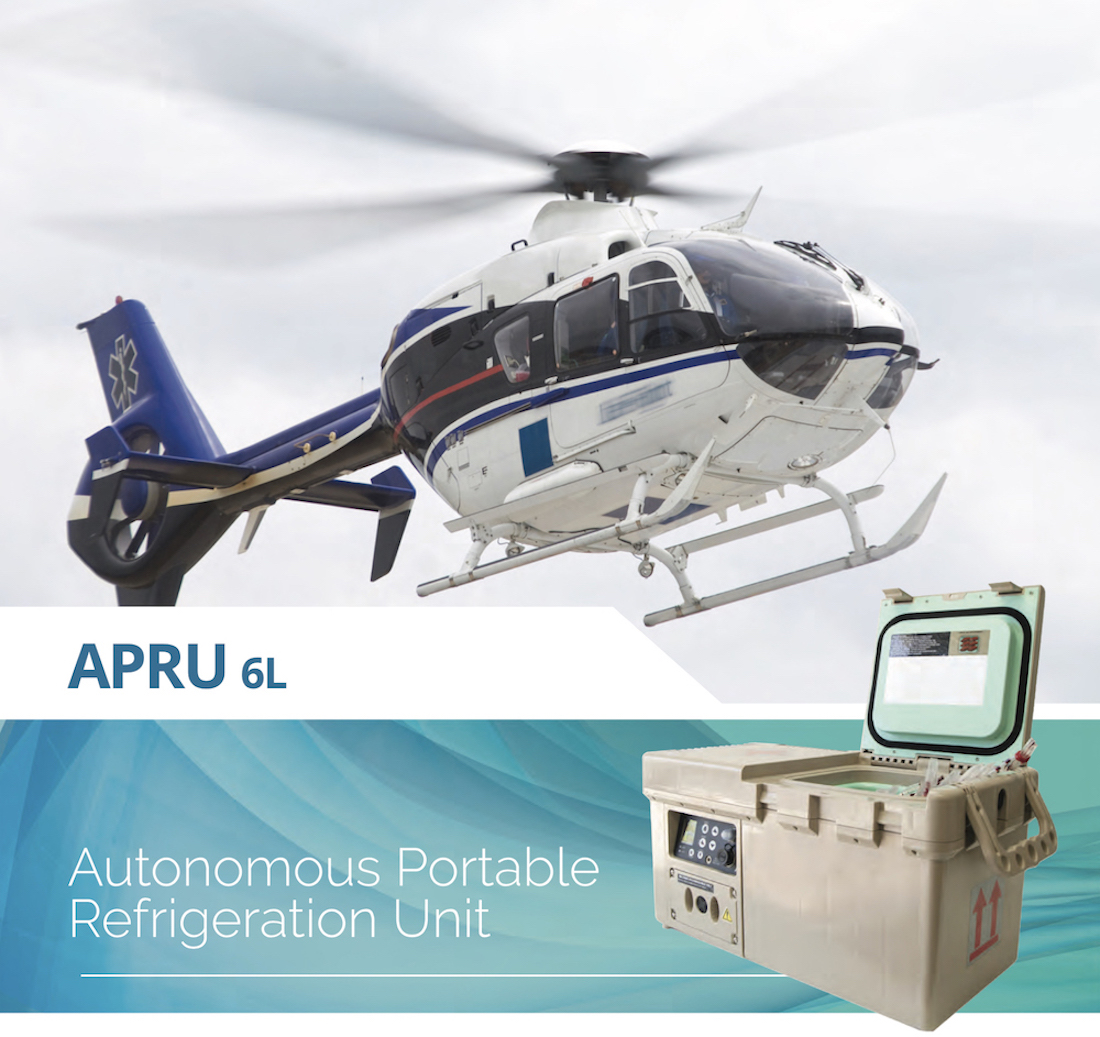 Delta Development’s portable medical refrigerator is expected to be ready for military deployment in early 2021.

Delta Development has been collaborating with the 48th Rescue Squadron at Davis-Monthan Air Force Base in Arizona for the design and testing of the device. The famed unit conducts combat search and rescue missions, serving as “guardian angels” during U.S. operations around the world. It also performs civil search and rescue, disaster relief, humanitarian aid, emergency medical evacuations, and counter-drug operations.

The portable medical refrigerator is slated for field testing in civilian situations this winter and is expected to be deployed in combat areas in early 2021. The vision is that one APRU could be eventually issued to each squad of soldiers, so that ground troops could be carrying their own limited supply of fresh blood for taking care of injuries.

Designing One of the “Smallest Refrigeration Systems in the World” 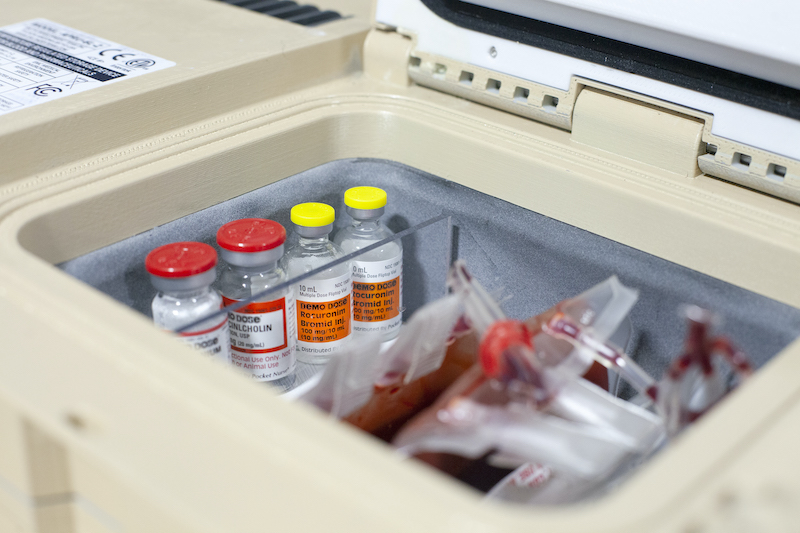 One of the Delta team’s biggest design challenges was centered around miniaturization: How do you shrink the typical 150-pound small hospital fridge to a more portable unit one-third to one-fourth its size and one-fifth its weight?

At a glance, the APRU (which holds six liters of blood) looks more like a large first aid kit or fishing tackle box than a refrigerator.

“What we should compare it to is what the medics are carrying right now,” says mechanical engineer Tim Gust. “They'll try to bring along these hospital refrigerators that are not really mobile devices. They have heavy batteries that come with them so they can be moved down the hall, but they weren’t meant to go out in a C-130 Hercules aircraft. They're not designed to be out in a tent in the desert – and certainly, they're not single-person carriable.”

“So we’ve developed one of the smallest refrigeration systems in the world,” he adds.

The compact 29-pound unit is 19” wide x 10” high x 10” deep. Its rechargeable battery lasts for 80 hours with a digital screen indicating remaining power. The dustproof and waterproof device is also operational in any orientation (on its side, upside down, tilted), runs in extreme hot and cold environments, and is designed to withstand the rigors of rescue operations.

The APRU has an embedded heater to prevent its contents from freezing. The device recently passed its icing tests as part of its National Electrical Manufacturers Association (NEMA) 4X certification required for outdoor equipment. The unit is still operational even when there is formation of ice on the exterior. 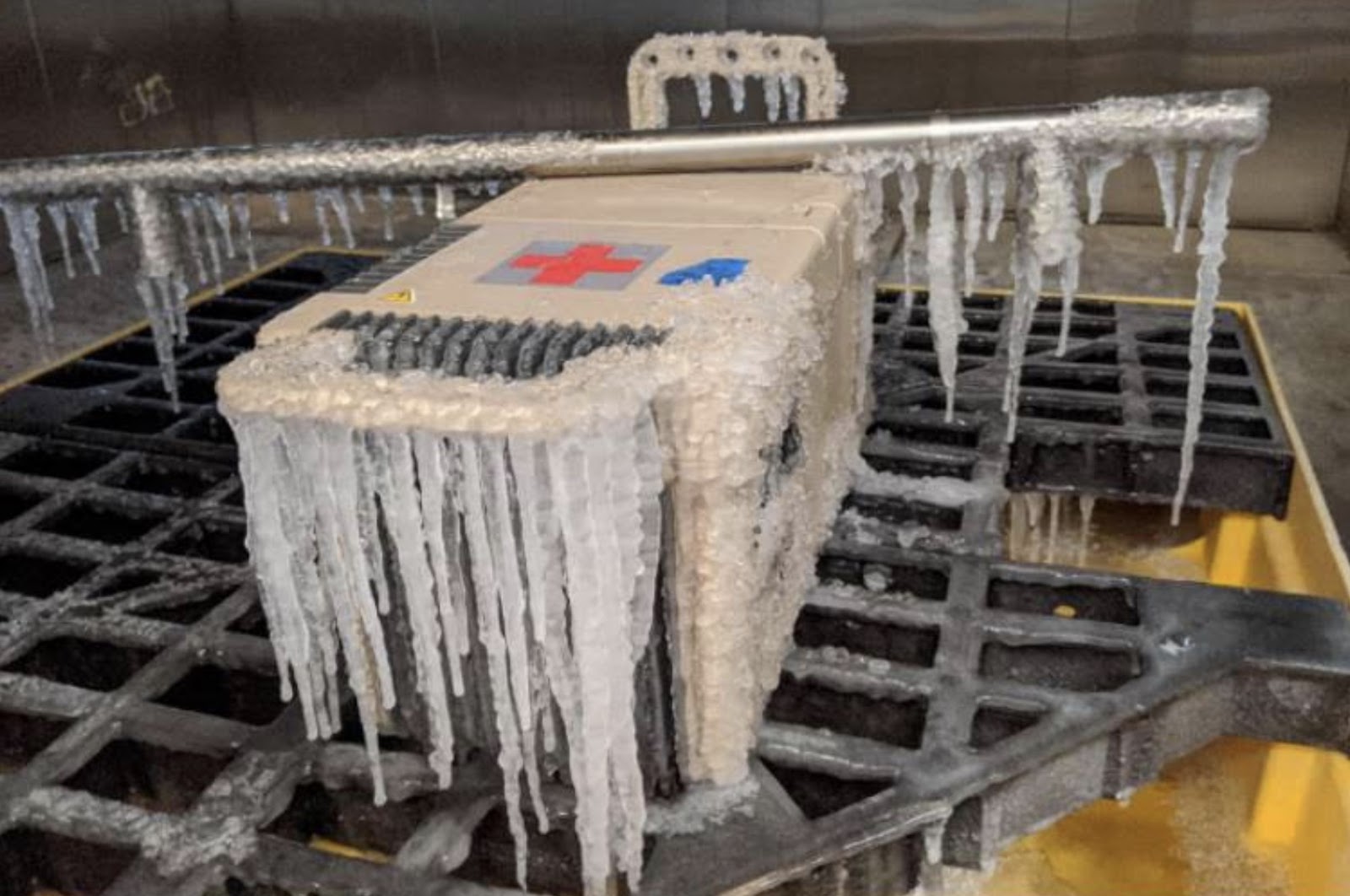 “One of the challenges was to make a rugged product that can withstand these high ambient conditions,” notes Gust. “And so part of making it rugged involved replacing the traditional condenser – that has a fan blowing air over the condenser – with just a large aluminum heat sink. That is pretty novel. Making that actually work took a lot of testing and FEA to really design the heat sink to reject that much heat.”

Having no fan means there are fewer moving parts to potentially break down.

“The passive heat exchangers are diecast aluminum structures that are very substantial and stiff and use convective natural cooling instead of active. So it’s completely different than your dorm fridge that would have a little fan blowing over some delicate aluminum fins,” he adds. 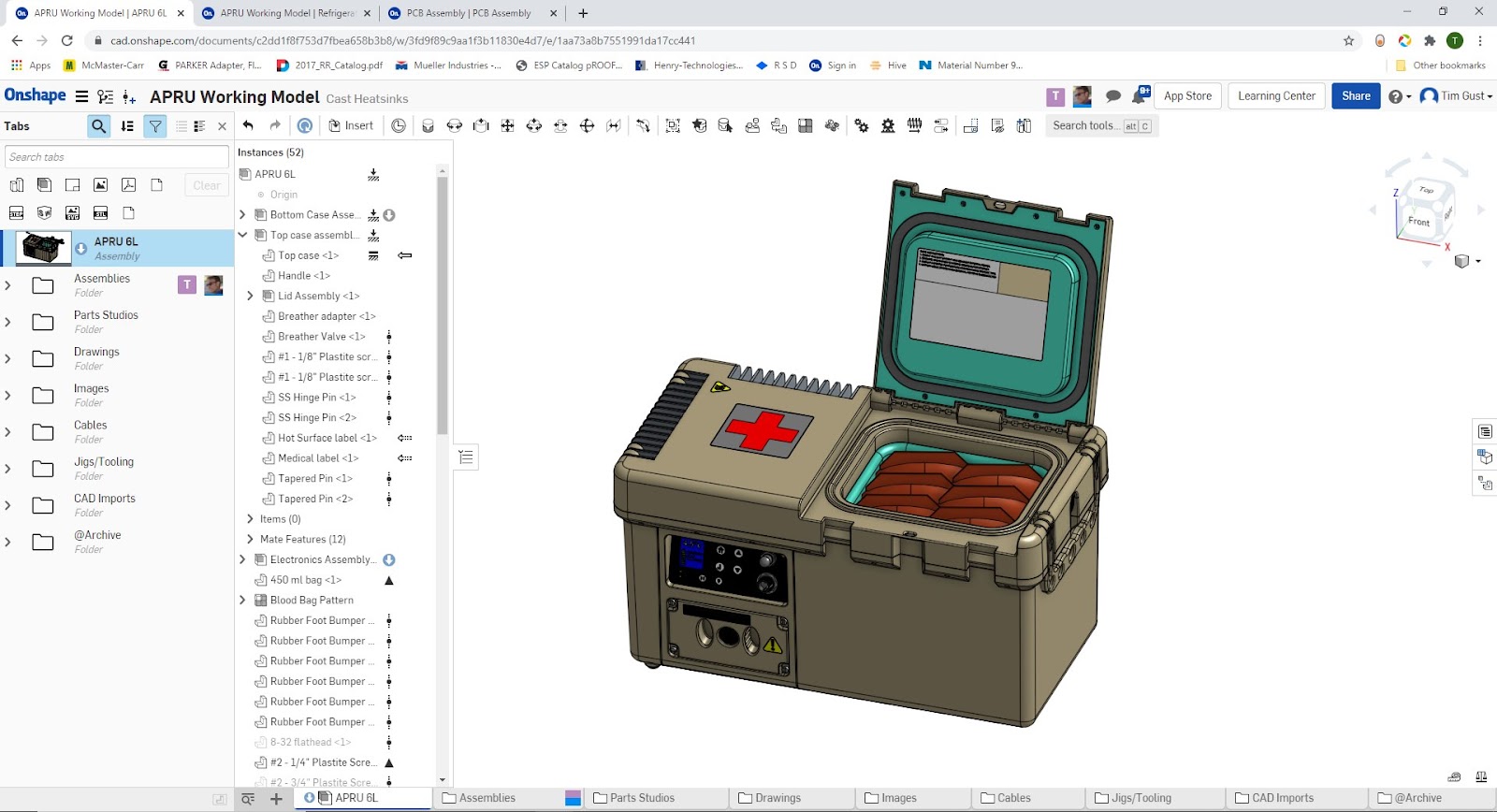 As a small company with 13 employees, Delta places a high value on versatility. Most of the team’s five mechanical engineers are also proficient at either electrical or software engineering as well.

“Before we started using Onshape, we were also our own IT guys,” explains Delta Development chief engineer Bill Barg. “We were constantly running out of disk space or having one computer fail and dealing with issues about local installations of software and trying to keep up with the license file on some server. About 20 percent of our time was just dealing with administrative issues, you know?”

“Now it's such a liberation to not ever have to worry about what's on our server because it's all on Onshape's servers. Not having to worry about IT overhead has been a huge time-saver for us,” he adds.

Onshape’s real-time collaboration tools allow multiple engineers to work simultaneously on the same 3D CAD model in the cloud. Whenever one team member makes a design change, everyone else on the team instantly sees it. A comprehensive Edit History tracks who made what change and when, allowing teams to instantly revert back to any prior stage of the design.

"Whenever I describe Onshape to anybody, I always say, ‘It's like the Google Docs of CAD,’ and they're instantly like, ‘Oh, that makes so much sense. Why haven't they (the CAD industry) done that already?’" says Futch.

“Being able to collaborate in a browser just makes CAD extremely more useful for a distributed team like ourselves. I previously spent 30 years doing it the old way and I’m very glad we decided to change our approach,” says Barg, who has used a number of file-based, on-premise CAD systems in his career.

Although its core design team is based in Arizona, Delta Development has an electrical engineer based in Montana and frequently partners with an injection molding company in Detroit.

“The ability to do mechanical design reviews remotely has been critical for us,” adds Futch. “When the COVID-19 pandemic forced us to work at home, we were able to continue as normal with our design process.” 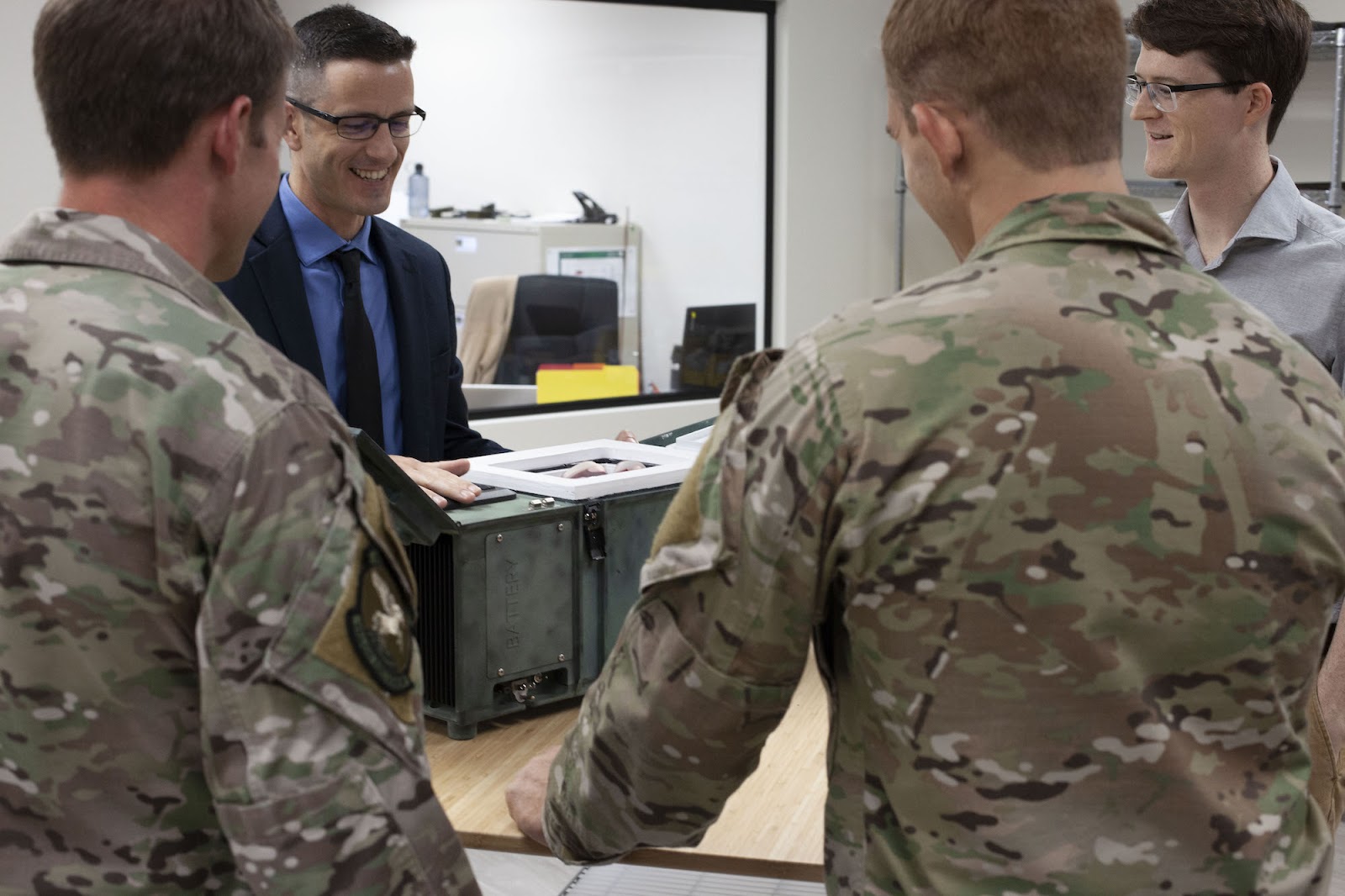 Delta Development is collaborating with the 48th Rescue Squadron at Davis-Monthan Air Force Base in Arizona.

Delta’s engineering team is also currently developing a blood-warming device as a companion product to their blood-cooling unit. The new portable device would warm blood to body temperature in the field, reducing the risk of the patient getting hypothermia.

“As we develop these products with the pararescue squadron, one of the things I’m most excited about is the civilian application,” says Futch. “You can bet that we are looking at making these devices available for civilian air rescue and ambulances. So I’m really excited that our research can help out even more people.”

Barg notes that his team is frequently asked why a portable blood storage refrigerator has never been invented before – especially since the technology itself is readily available.

“The answer is that it took a special team of players here – engineers, retired soldiers and retired medics – to first put the importance on it,” he says. “This refrigerator is now ready to save lives in the battlefield. And it’s because of our partners who are retired soldiers who bring us new points of view.”

“We’re also at the beginning of a new era in engineering capabilities where we can take on an extremely difficult task and do it quickly at a reasonable price. There are so many new ways to get this type of product design done. I'm talking about 3D modeling, 3D printing, faster communications between people working in different locations, and the gig engineer economy of many different contributors playing a key role,” Barg adds. “To be able to take advantage of these new approaches to engineering and use them for a good purpose is very satisfying.

Need more details? Get a real-time look at Onshape's collaboration and data management capabilities by requesting a demo today.