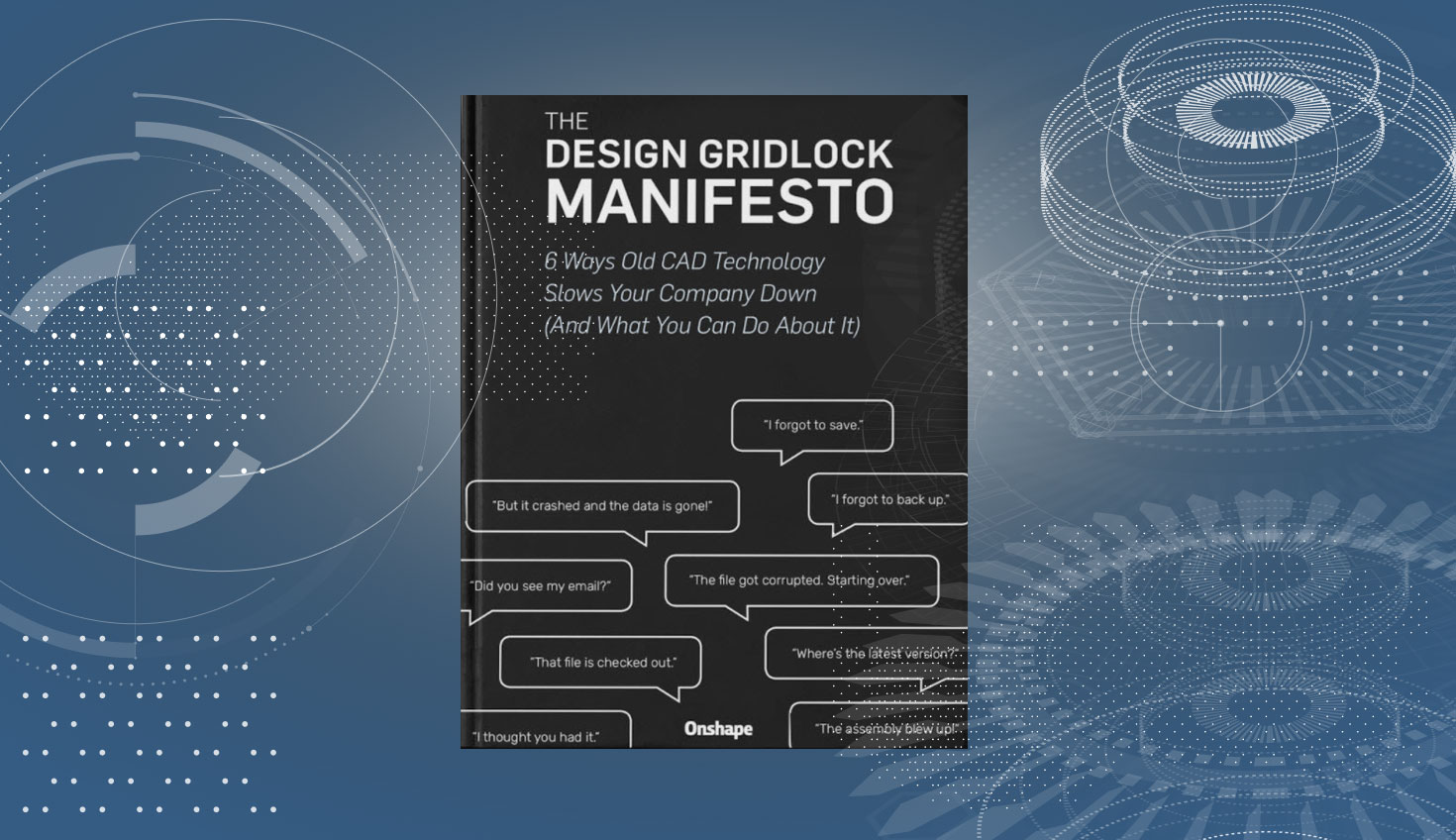 (The following is an excerpt of “The Design Gridlock Manifesto,” Onshape’s eBook exploring the numerous ways how old file-based CAD technology forces the design and manufacturing process to a complete halt – and sometimes even pushes it backwards.)

Manufacturing the wrong version of a design is an expensive proposition. Knowing which version of your work is the final one shouldn’t be a guessing game. Are you sick of asking your team “Where’s the latest version?”

With old file-based systems, CAD data is usually edited by multiple people in multiple places. Particularly with large assemblies, there are lots of files to keep track of. You save a version, make some changes and rename the file. Copies are emailed to colleagues and get copied everywhere. There’s never really a way to know if you truly have the latest version.

Some design teams rely on naming conventions like Part1-v1, Part1-v2, etc. and then settle on a “final” name when they’re done. Something like “Assembly4-Final.” Until a last minute change needs to be made and then what do you call it? The “Assembly4-Final-Really-Final”?

Complicating matters further, changing the names of files as their contents change can cause big problems in an assembly because file names are used as references. Nobody likes broken assemblies. Nobody.

Even if you use a complex and expensive PDM system – requiring engineers to check-in and check-out files like they are in a library or bank vault – all you can see is the latest data that is in the vault. There’s absolutely no way to know if someone else has a copy outside of it. Maybe they’ve followed procedure with the PDM system and put a lock on the file. Or maybe they haven’t.

If they have checked out the file, you have to wonder if they’ve changed it since they checked out. If they have changed it, that’s the latest version. Is the PDM system up to date? Nobody knows because the PDM vault doesn’t update in real time. It only updates when people go through the trouble of updating it.

With modern CAD, it’s easy to find the latest version because there’s only one place to look for it. Because CAD data in Onshape is never copied as files, but is instead stored in one central database in the cloud, it updates in real time as your team members edit.

When one engineer makes a change from anywhere, the rest of the team instantly sees it.

There’s also no need for any PDM system servers, installs, licenses or backups because Onshape includes built-in version control (and Release Management in Onshape Professional). For modern CAD users, the “Where’s the Latest Version?” problem is no longer a problem.

Based in College Park, Maryland, IonQ is building the world’s first fully-expressive, full-stack quantum computer based on trapped ion technology. Quantum computing is poised to reshape medicine, materials, simulation and other industries.

“We're trying to design and build a quantum computer, which is an enormously complex device with thousands of individual parts,” says Jonathan Mizrahi, a senior hardware engineer at IonQ. “So it's of vital importance that this massive assembly have up-to-date parts, and we know what's final and what we’re still editing.”

“This is a big collaborative process. There’s electronic components, optical components, vacuum chamber components, pieces we get from vendors and parts we’re making ourselves. All of these things need to interface and work together,” he adds. “We’re all working on the same overall assembly, which of course has subassemblies, but we’re all referencing back to that master assembly regularly.”

IonQ began as an academic research project at the University of Maryland’s Joint Quantum Institute Laboratory. Before the academics secured funding to launch a spinoff company, the team was using a PDM system to keep track of thousands of CAD files.

“The most frustrating thing about using PDM is that any given part has an owner – and until that owner checks the file back in and releases ownership, nobody else can edit that file,” Mizrahi says. “The whole check-out/check-in process really slowed us down. And If people aren’t careful and they still own a part when they go on vacation, things can come to a standstill. Of course, with Onshape there’s none of that.”

“I like that Onshape’s version control is automated. No one has to be the owner. Everybody sees what everybody else is doing immediately,” he says. “Every single change is recorded in Onshape so it’s easy to have an instant ‘undo’ or to scroll back through anything you’ve done. Onshape gives us confidence that we always have the newest version and that everything is going to fit together as expected.”

Overcome Design Gridlock – Get the eBook

In “The Design Gridlock Manifesto,” you’ll read the most frustrating product development experiences of 15 companies and how they dealt with seemingly unavoidable delays in their design and manufacturing process.

If you’ve read this far, you won’t be surprised to learn that the common denominator for conquering gridlock is Onshape, the only modern CAD system that combines advanced modeling tools and design data management in a secure cloud workspace.

So now that you know that there’s a fast track to modernizing your company’s workflows, what are you waiting for? Get your free copy of “The Design Gridlock Manifesto” today!