Resource Center > Articles > How to Fix the World with Cloud CAD 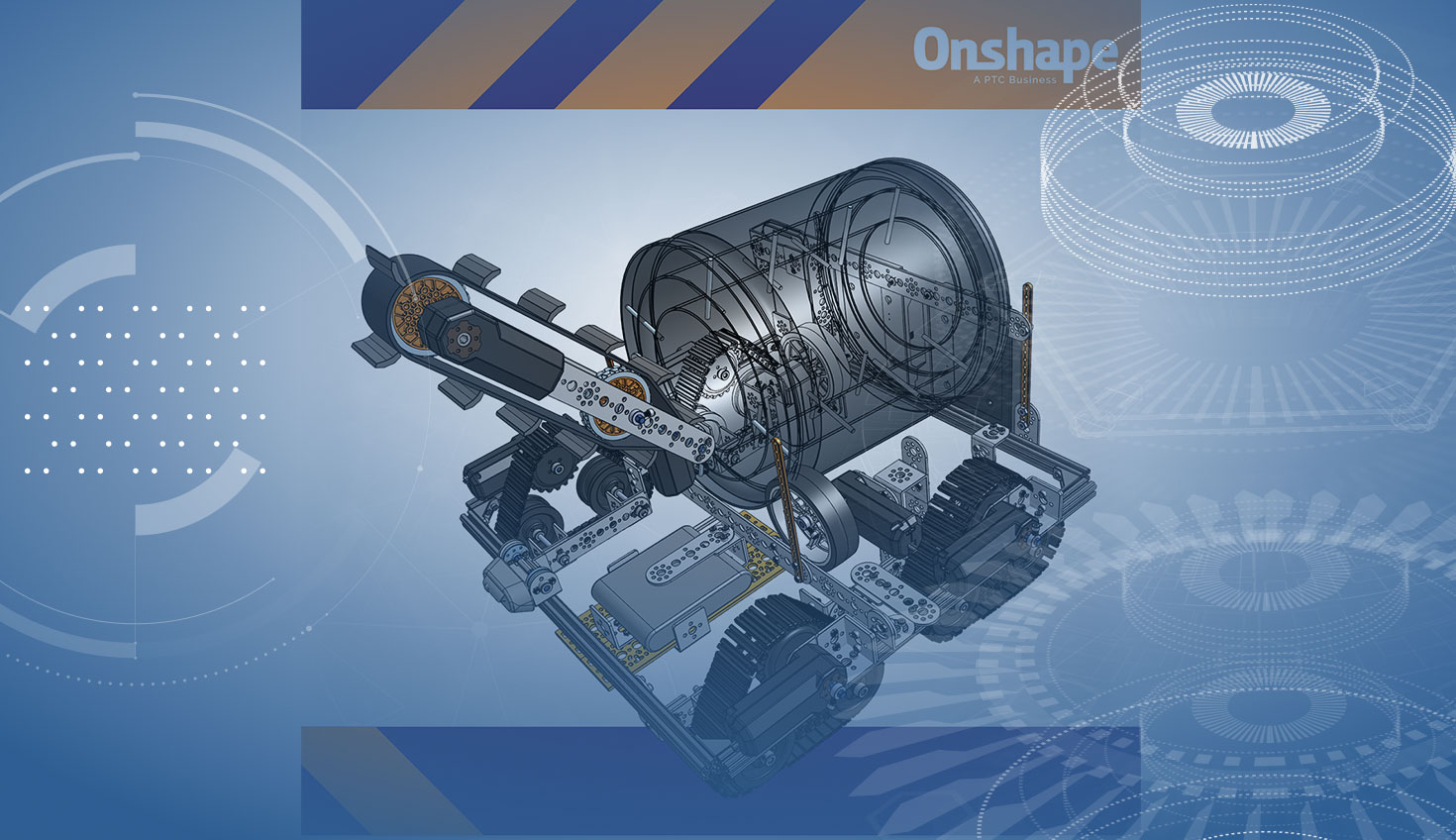 How to Fix the World with Cloud CAD

The world has no shortage of problems – especially now. Which ones can most easily be solved or alleviated by robots?

That’s the challenge PTC posed to students in the FIRST® organization around the world in the six-week “Robots to the Rescue” design competition. FIRST, the global nonprofit that offers a suite of robotics competitions for students in grades PreK-12, suspended its 2020 season back in mid-March because of the COVID-19 pandemic.

Participants in the contest, which wrapped up on May 15, used PTC’s Onshape product development platform that enables teams to remotely work together online on the same CAD model at the same time from any computer, tablet or phone. The real-time collaboration tools proved to be especially vital to students and mentors who could no longer meet in person during shelter-in-place mandates. Used professionally worldwide by thousands of product developers, Onshape is free for students and educators.

One of the more fascinating metrics to come out of the contest is the revelation that procrastination has not been impacted by remote learning. Take a look at the hourly Onshape usage stats from Robots to the Rescue below. The sudden surge in the graph on the far right represents everyone cramming at the last minute before the submission deadline. Human nature!

Fixing the World: Where Do You Start?

Not surprisingly, many robot concepts were inspired by problems arising from the global coronavirus crisis, such as this UV-sanitizing robot from the Alpacas team (FTC Team #14535 – California) below: 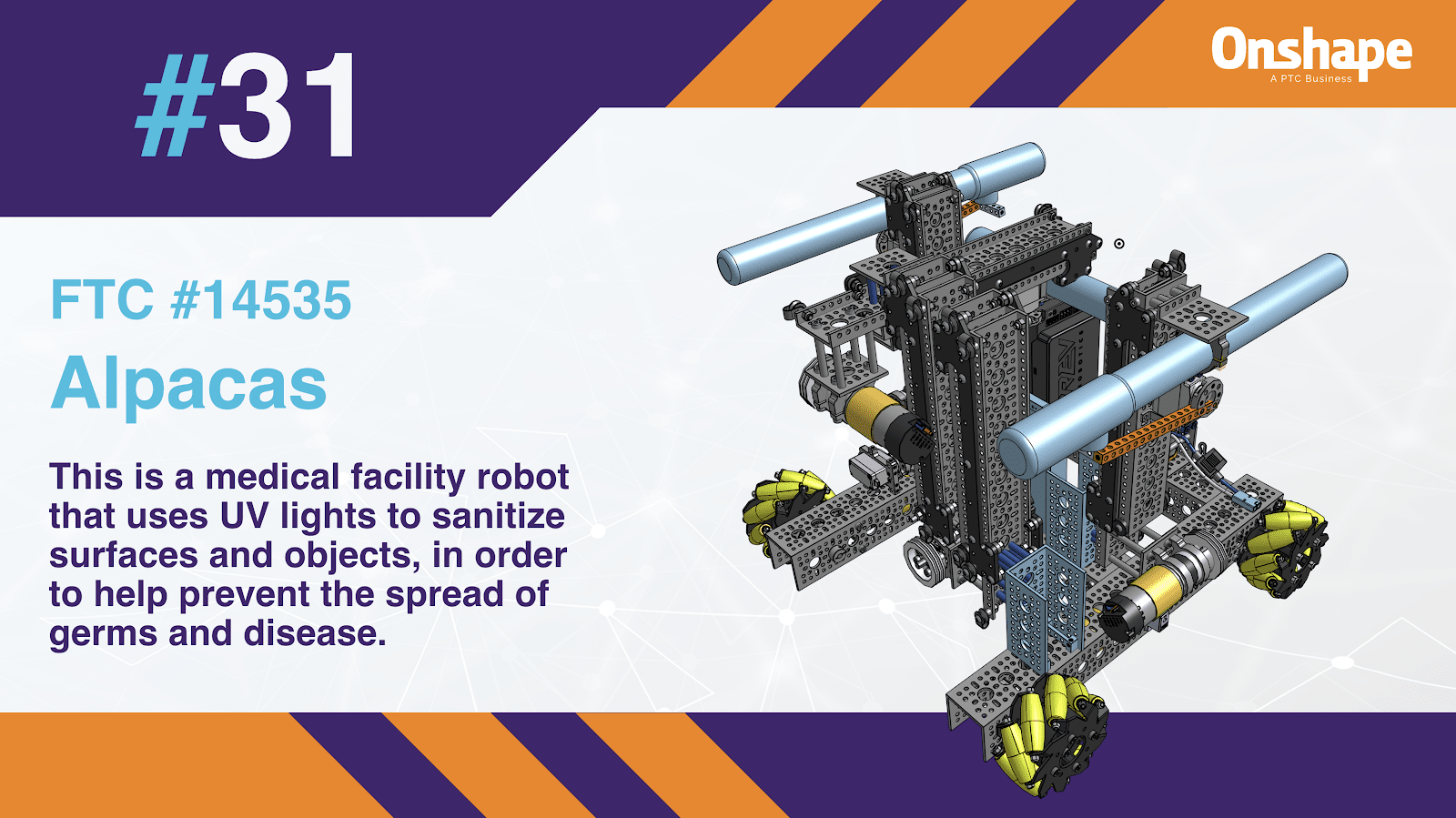 Other FRC and FTC teams chose global issues unrelated to the virus, such as deforestation in the Amazon rainforest. 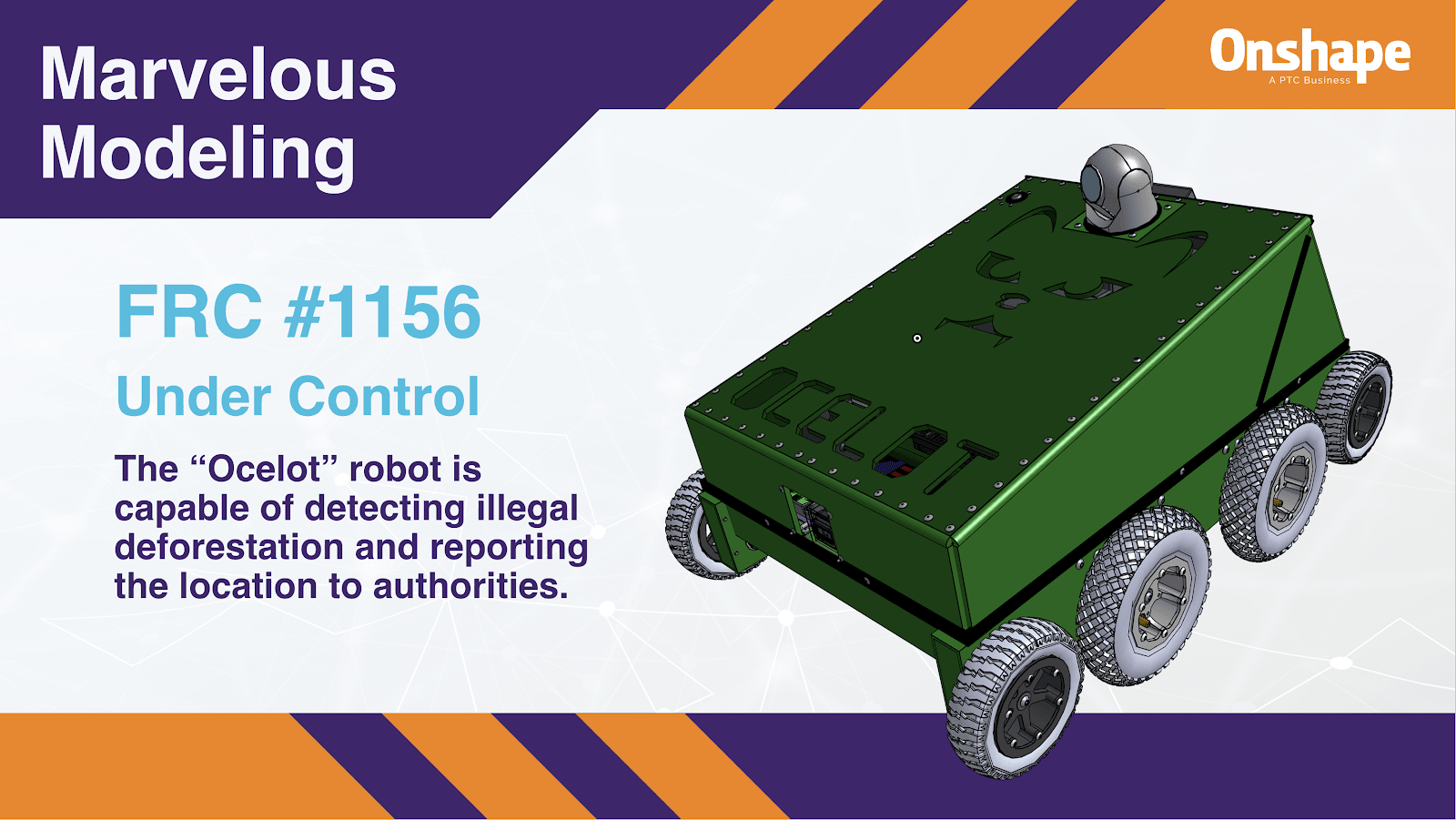 The cat-faced robot above is named after the ocelot, a small wildcat whose habitat extends from the southwestern United States through Mexico, Central America and South America. The robot is small and rugged enough, like an ocelot, to maneuver through thick forests to photograph illegal clearing of protected land in Brazil. 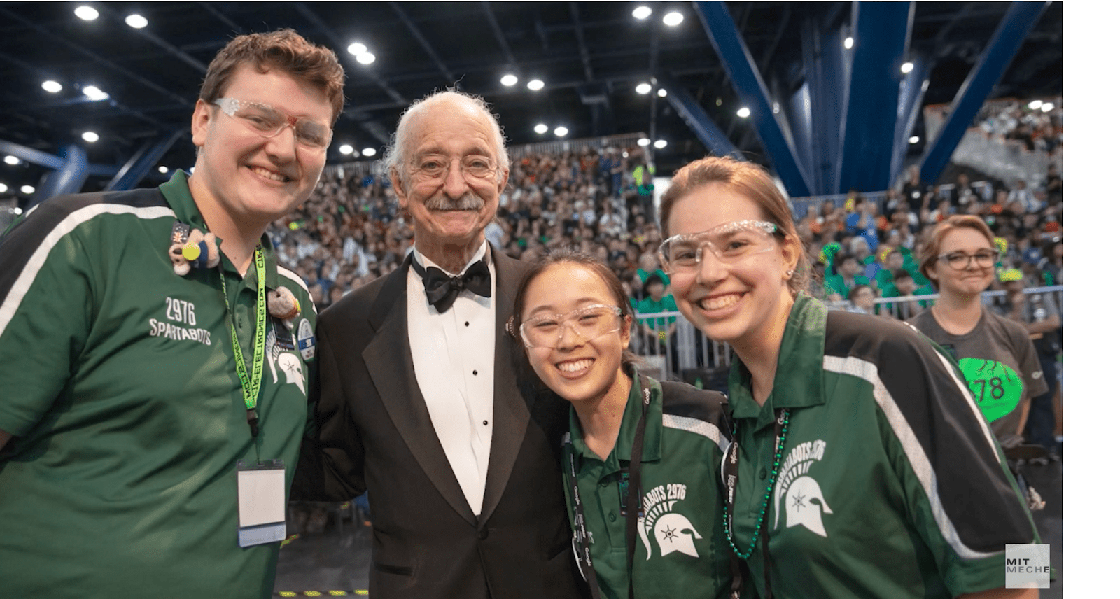 At last week’s Robots to the Rescue ceremony, the Most Unique Design Award was named in memory of the late Dr. Woodie Flowers, the Pappalardo Professor Emeritus of Mechanical Engineering at the Massachusetts Institute of Technology. Flowers collaborated with FIRST founder Dean Kamen to develop the FIRST Robotics Competition.

The award, which came with a $500 prize, recognizes “an exemplary team whose robot takes a unique approach and solves a real-world problem with intelligent design.”

Flowers was best known for turning MIT’s iconic Design and Manufacturing course 2.70 (now known as course 2.007) into a project-based design competition. According to the MIT Department of Engineering, he transformed the course “from a mostly pencil-and-paper experience to one of fun and hands-on building” marking a “profound paradigm shift in engineering education.”

One of Flowers’ students in 1981 was Jon Hirschtick, future founder of both SOLIDWORKS and Onshape. Hirschtick told the FIRST participants that the class had a big influence on his life and career, calling it “like a FIRST competition before there was a FIRST.”

Underscoring his nostalgia, he pulled out a metal-and-wire contraption that he’s kept in his basement for 39 years. It was the original gadget he had built in Flowers’ course, which was a competition to put a square peg in a round hole. 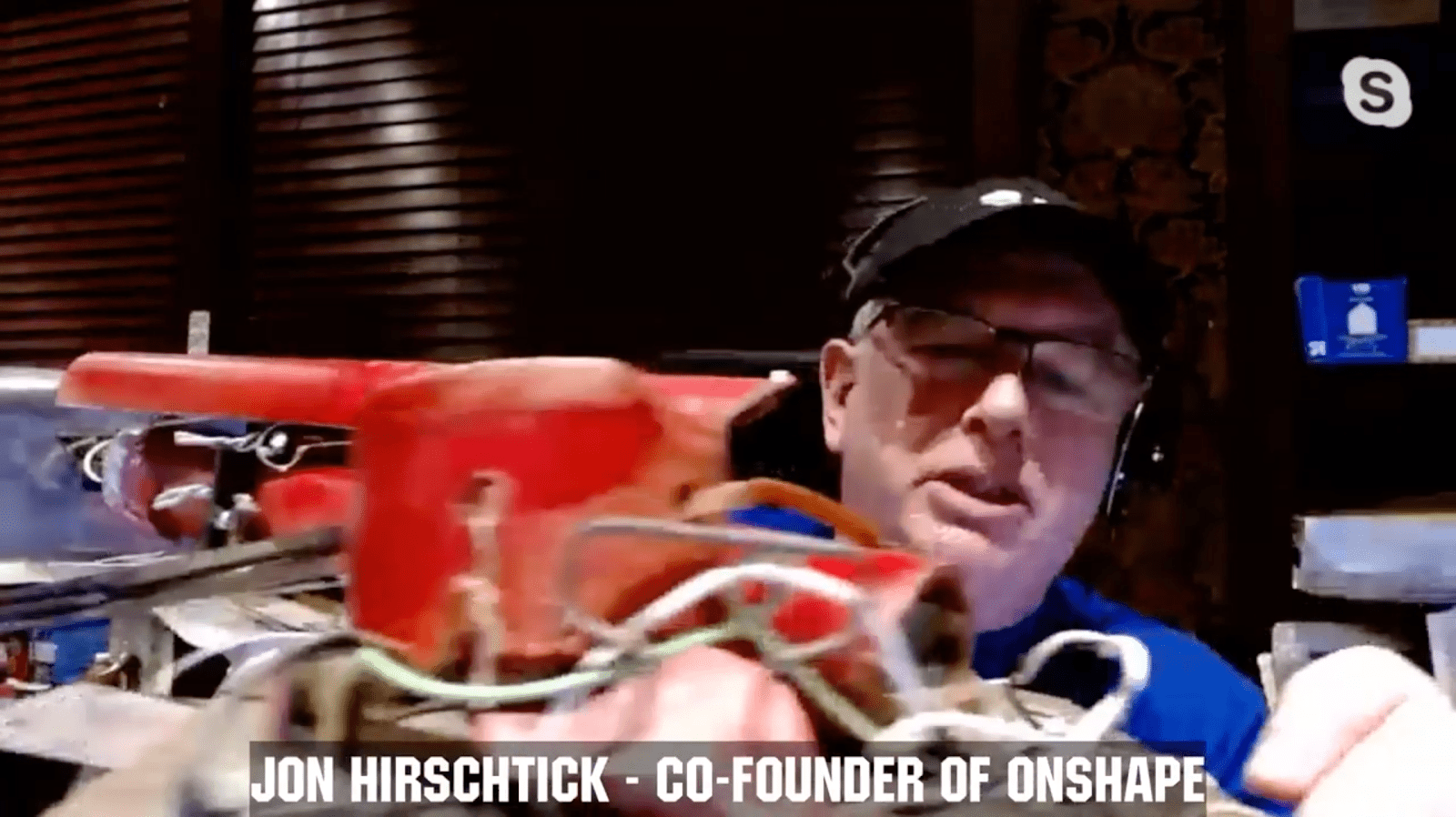 PTC executive Jon Hirschtick holds up a rudimentary engineering project he built as an MIT student in 1981.

”This class made such a profound impact on me and I worked so hard building this machine and learned so much that I could never bring myself to throw it away,” Hirschtick said. 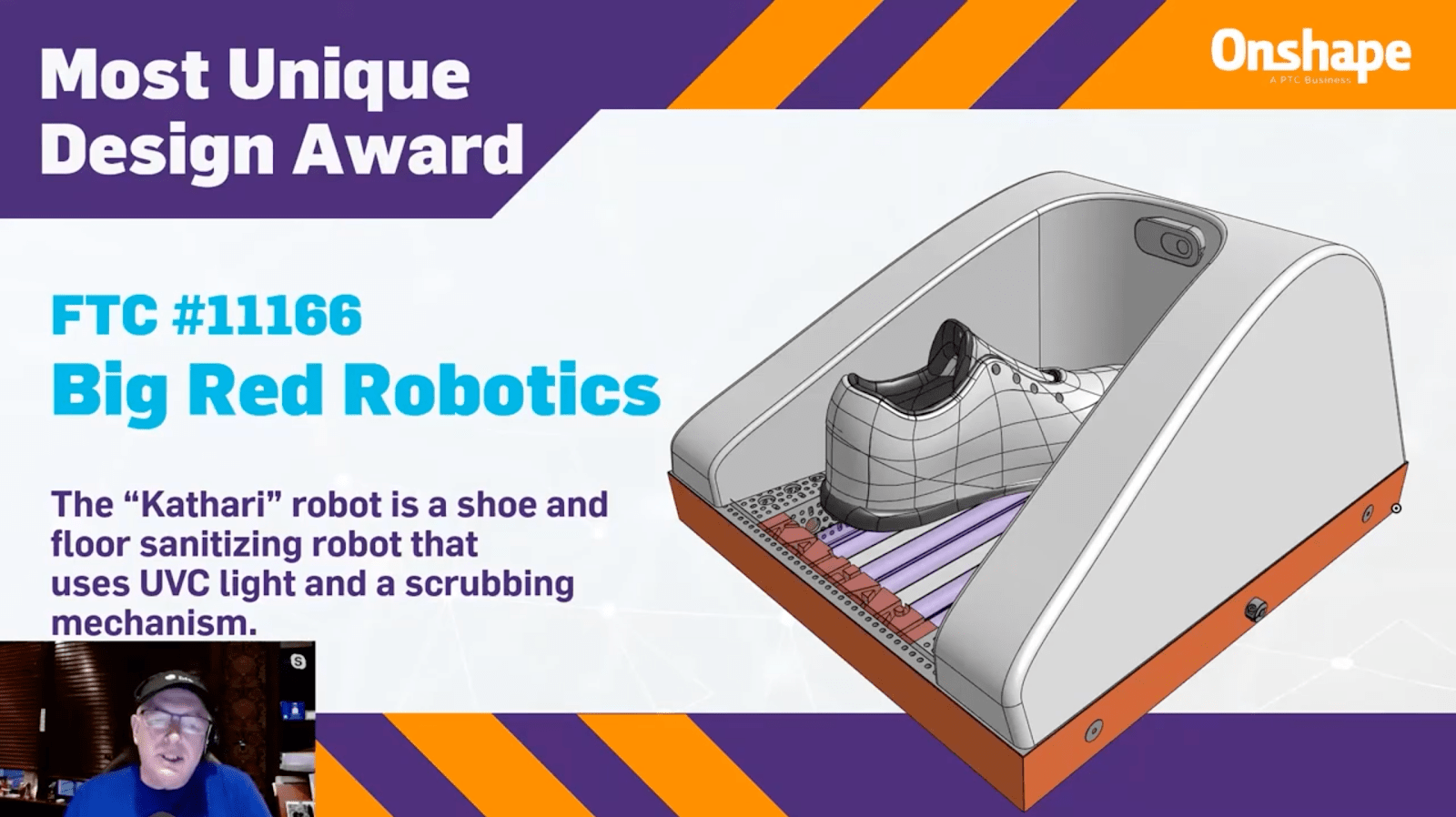 Hirschtick praised the sleek design for being realistically buildable and for its attention to aesthetics. 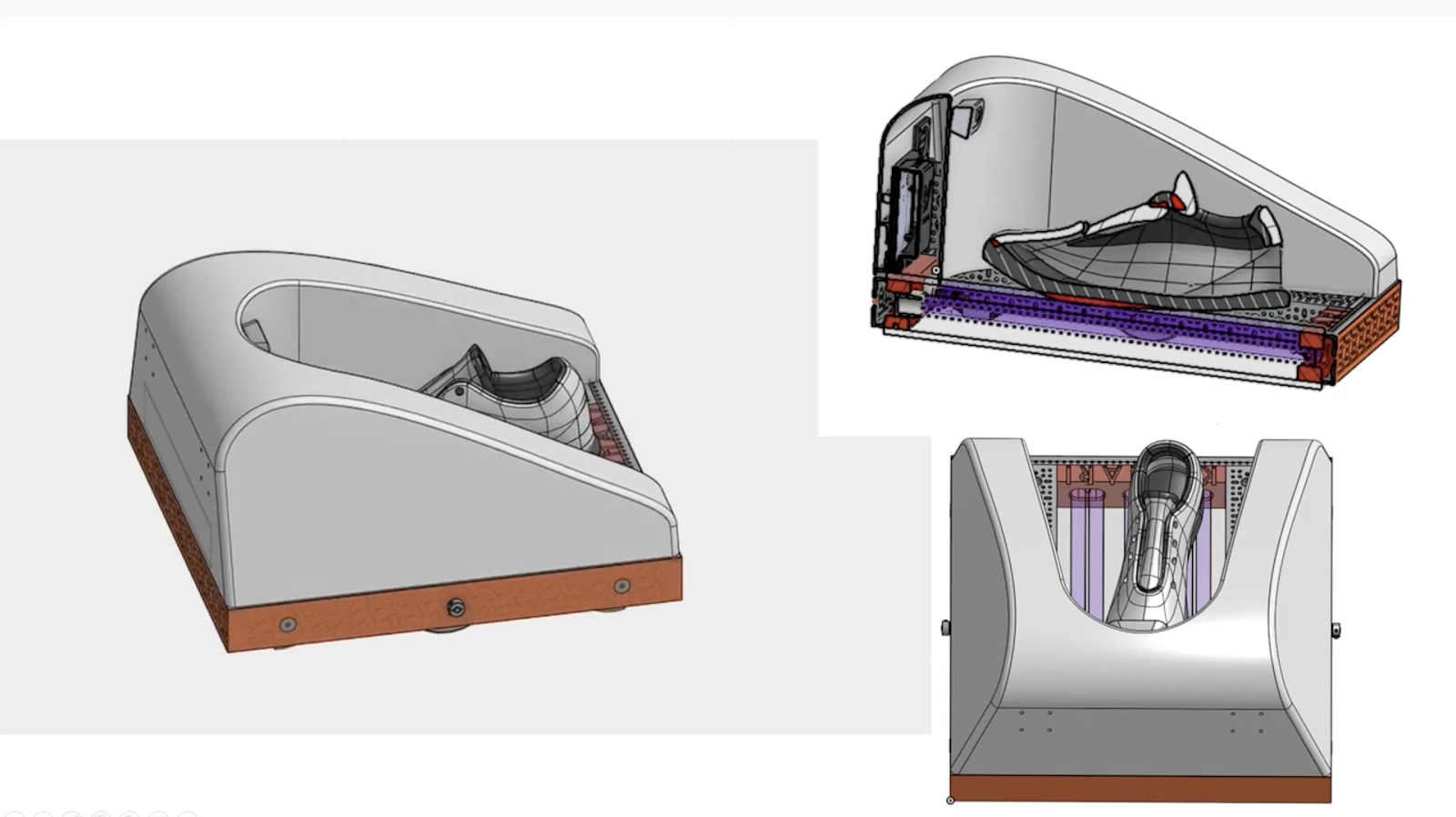 The Top 3 “Robots to the Rescue”

The winners of the Robots to the Rescue design competition were chosen based on how well teams defined a global problem and documented it with research, their innovative use of standard FIRST robotic components, the completeness and complexity of the design, the robot’s capabilities to solve the problem, and the feasibility of manufacturing the product. Bonus points were awarded for utilizing various Onshape features – and for assisting other teams who needed support learning Onshape. (You can see the full Judges’ Scoring Rubric here.)

The top three winning teams each received a $1,000 prize. Let’s start the countdown…

In third place was FTC Team #341 (Miss Daisy – Pennsylvania) for its “Zoomba” robot that removes and replaces dirty animal bedding in zoos to improve hygiene. FIRST teams are known to appreciate good puns. 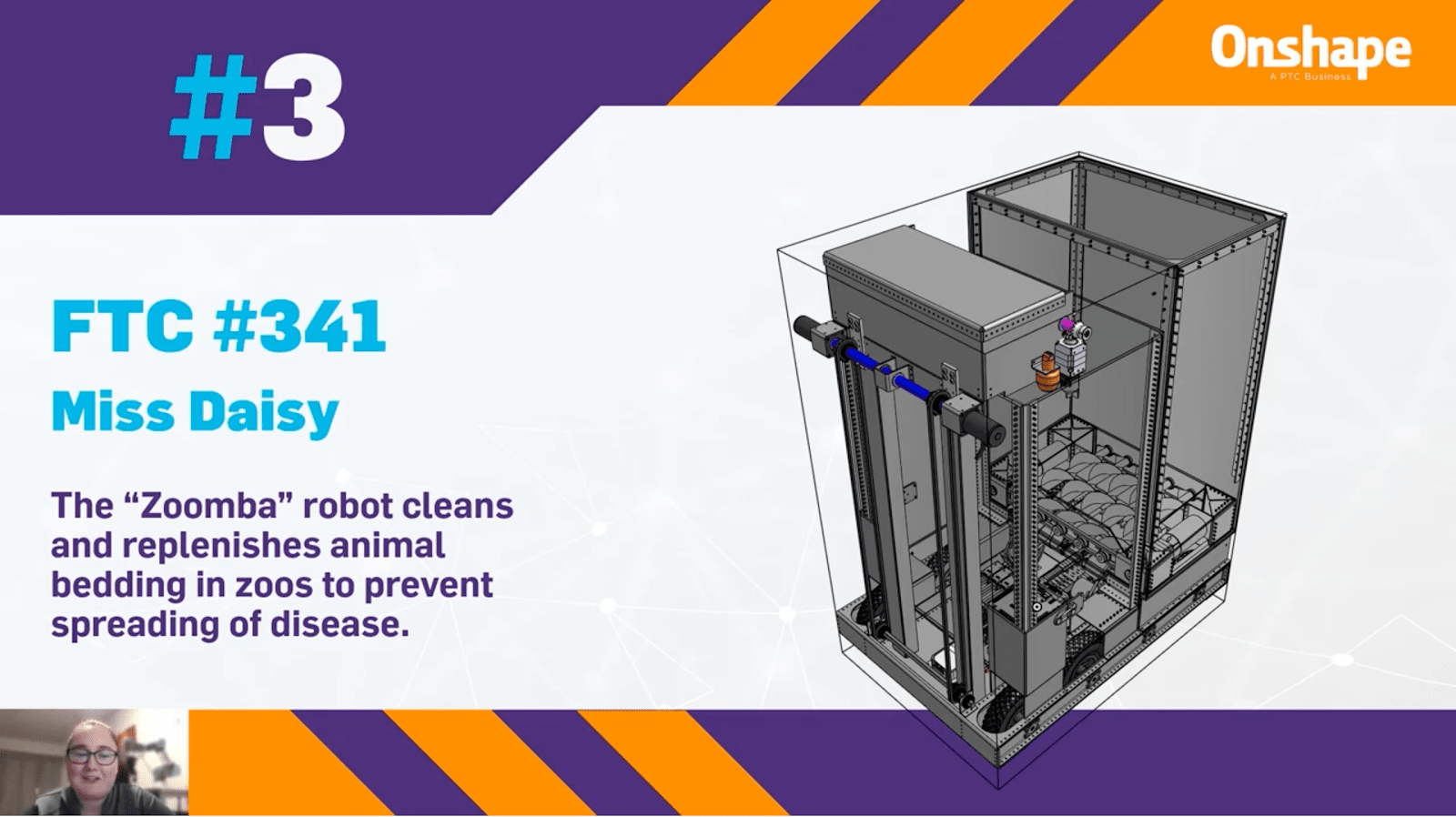 One of the compartments stores dirty straw that is sucked into the machine with a rotary brush. The other compartment stores fresh bedding, which is spread evenly by multiple augers. (Click here to see the Onshape public model.) 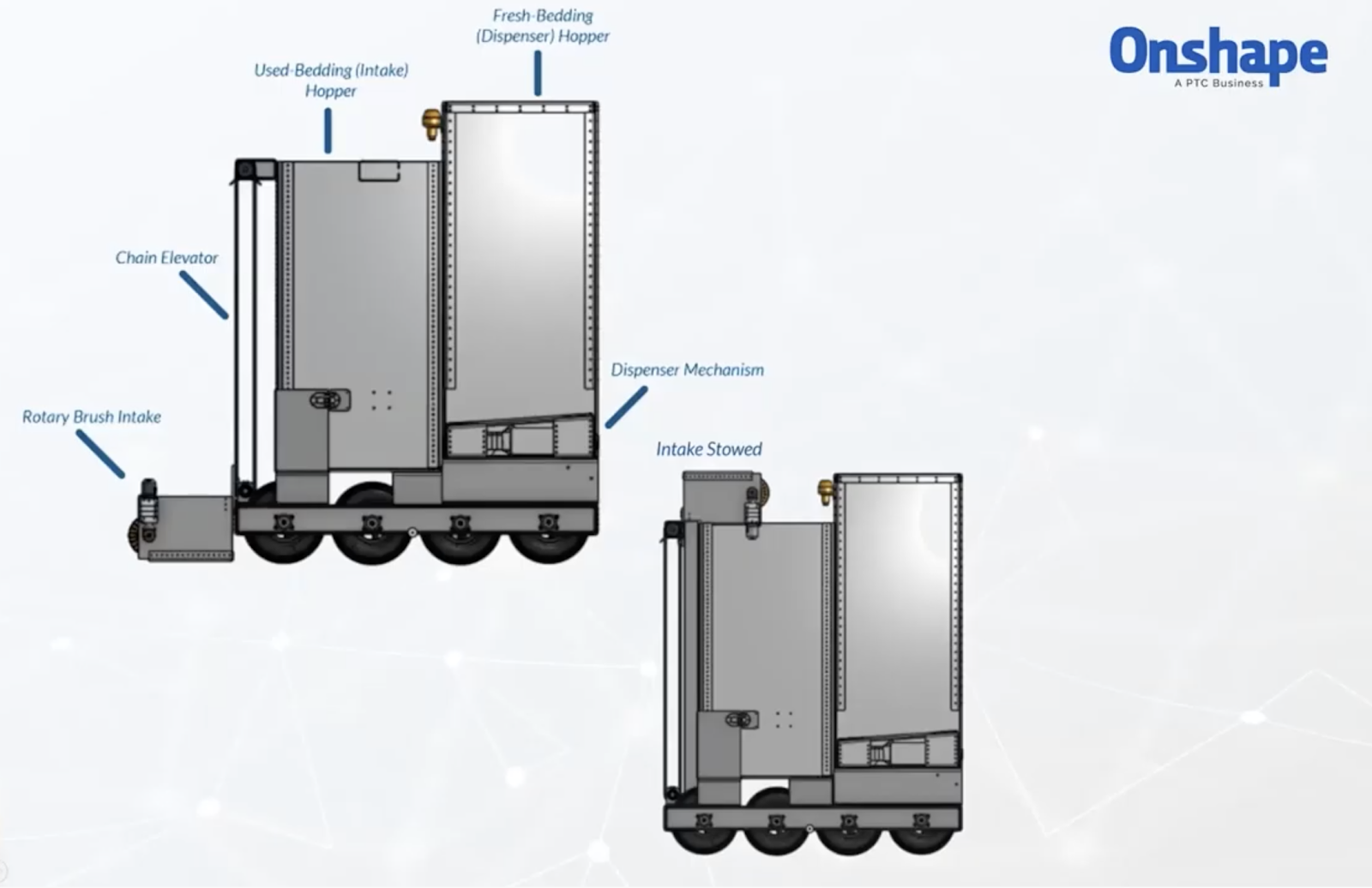 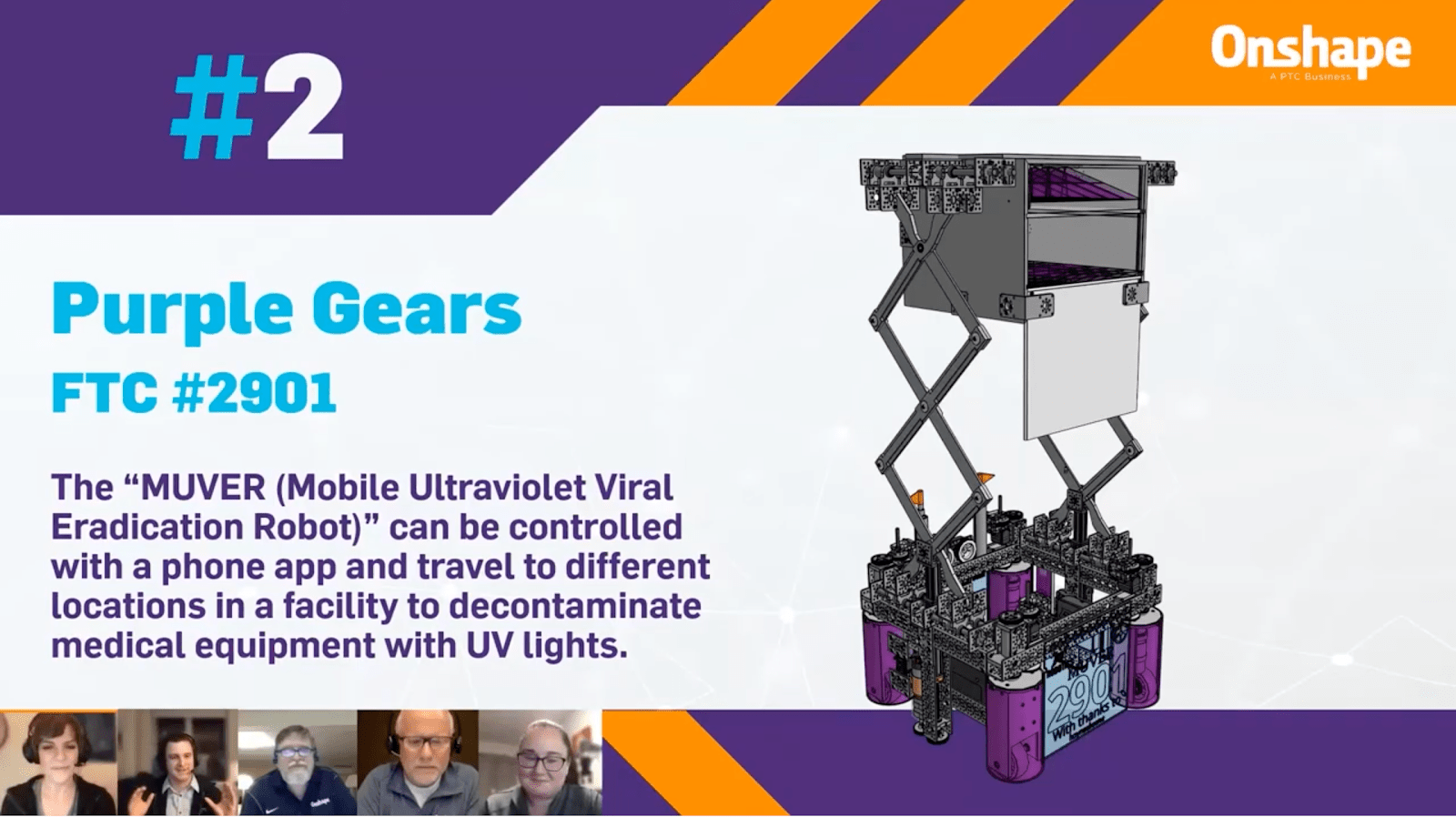 And finally, the top honors and bragging rights went to FRC Team # 6024 (R Factor from Mumbai, India) for its real-time pothole repair bot. The entry’s Problem Statement claimed that Mumbai “holds the world record for the most potholes of any city.” Competition judge John McEleney (Onshape’s cofounder) praised the team for making multiple design iterations after initially underestimating what it would take to haul heavy batches of asphalt. 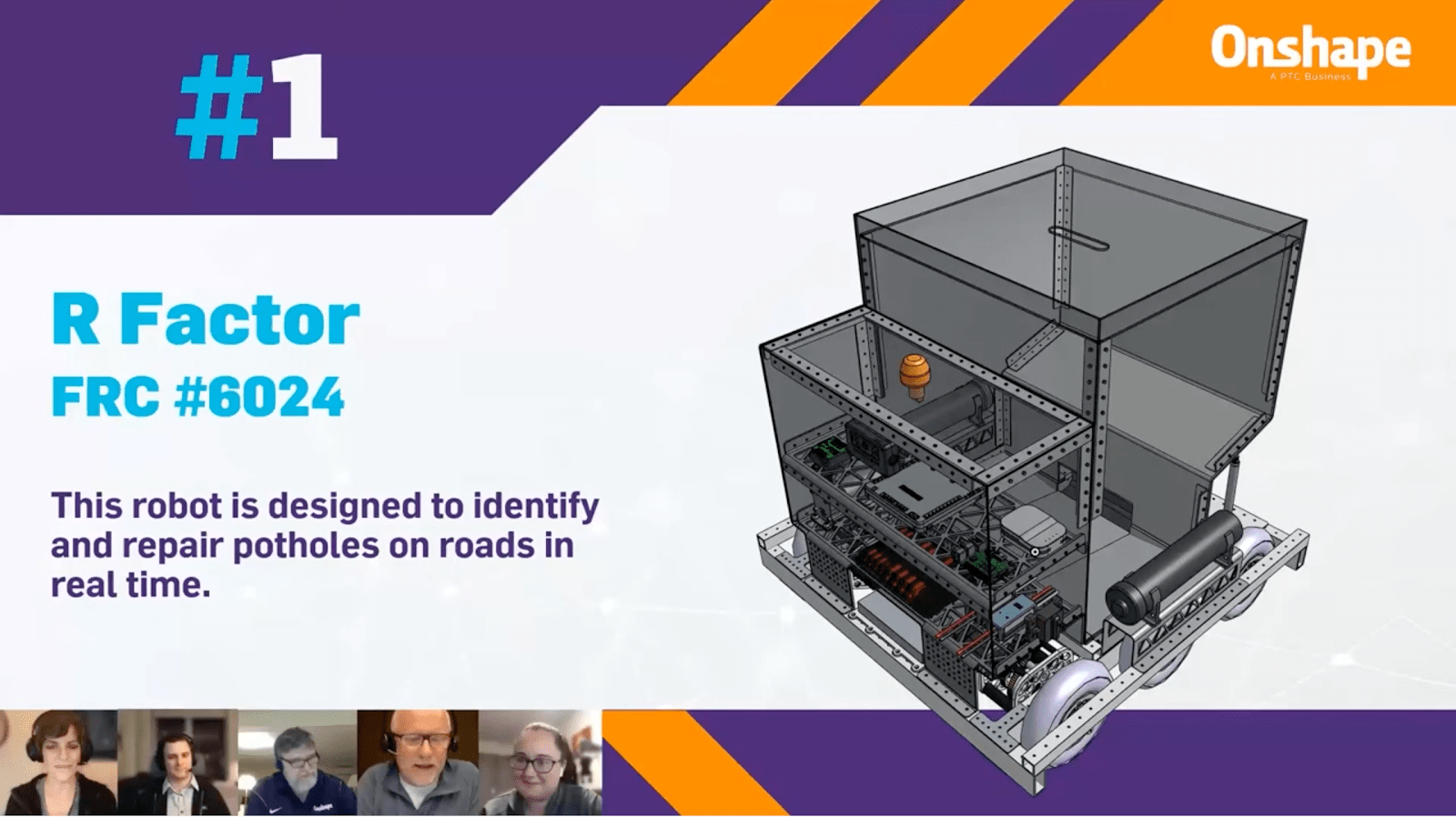 McEleney added that he would love to see the real-time pothole bot be deployed in his home state of Massachusetts, suggesting that version 2 include a mobile app for motorists to report craters in the road. (Click here to see the Onshape public model.)

PTC would like to extend a hearty congratulations to all the students who participated in Robots to the Rescue. Perhaps one of these future engineers will keep a FIRST robot in their basement for four decades like Jon Hirschtick!

For more detailed judges’ commentary on the Top 8 designs, a musical slideshow of all the student entries, and other special honors (such as “Friendliest Robot” and Best Use of FeatureScript), you can watch the full Robots to the Rescue awards ceremony in the video below: