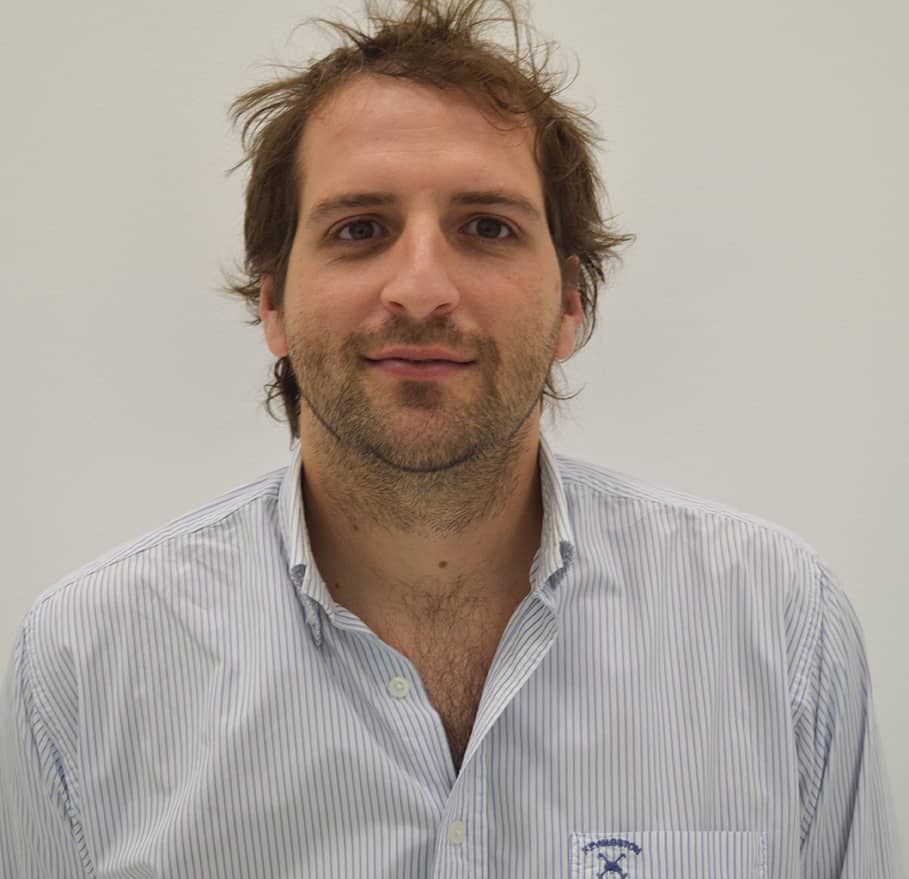 Pretend for a minute that you are one of the fellows casually working on the Empire State Building in 1931, acting as if you don’t have a care in the world. Underneath your stoic demeanor, however, you’d probably want to be sure that the engineers double and triple-checked that their building design was structurally sound. You’d want to know that they had actually performed calculations on all the beams that you might be standing on – and eventually would bear much heavier loads. Wouldn’t you?

Engineers have known how to solve beams with paper and pencil since the time of Galileo Galilei. The Euler-Bernoulli equations are easily found today on Wikipedia. But what about testing the hooks that the beam is hanging from? We might assume a hook is like a curved beam with a non-uniform cross section, but there is a better answer: finite elements.

I do not buy that old saying that “engineering is applied science.” Sure, what’s not to love about knowing the difference between Newton’s and Lagrange’s formulations of classical mechanics? It is great to know how to go from the Peano axioms to Krylov subspaces. But we do not employ just science in our endeavors. We use expert judgment, we apply our past experience, we ask around for other people’s advice, and we bring to the table a lot of other tricks like ingenious out-of-the-box thinking. Actually the word “engineer” comes from the Latin “ingenium.”

Anyone can build “big” hooks and move on. But we engineers build just “big-enough” (and heavy-enough and costly-enough) hooks. We are constantly optimizing variables, especially time and cost. Unless we go the curved-non-uniform beam path, we need a finite-elements tool to simulate (I would rather say “to model”) the stresses within the hook for the design loads. So let us fire our super-powerful and extremely-complex finite-element analysis program and see what happens, right? Well, there is still another engineering-friendly way.

Try to remember what came to your mind when you first heard about Onshape and they said “CAD on the cloud.” I remember what I thought: “it cannot be done.”

To my surprise, not only was it doable, but it turned out to be the best way to do CAD after all.

When we change our way of working, we have to climb a “potential barrier” very much like a neutron before inducing fission of an uranium nuclei. It is hard to leave our comfort zone, because we spend most of our time there. But switching from desktop-based CAD to Onshape paid off afterward, didn’t it? (If you have not switched yet, trust me, it will pay off.) But the path is not easy. You might also have to drag people behind you because they do not want to leave their comfort zones.

Take a look at the cartoon above. Who do you identify with?

Most of the time, I feel like the caveman holding the wheels in his hands. But I have to admit, sometimes I feel like the ones who stubbornly try to move the cart. What about you? And what about the leadership or your colleagues at your company?

Say you follow state-of-the-art engineering recommendations and design a crane hook online with Onshape. Now you wish to know how many tons the hook can withstand. Would you buy and install a complex and expensive piece of finite-element software plus all the required hardware? Why would you drag a simple hook down into such a magnificent beast’s jaws? That does not sound either time or cost effective.

Surely, you’d rather open a new tab and solve for those stresses in less than one minute: Seamplex is an Onshape partner and developer of CAEplex, an easy-to-use web-based tool for performing thermo-mechanical finite-element analysis running on the cloud. It is a fully integrated app, so there is no need to leave Onshape to run your tests.

Let’s take a look at how to quickly perform a finite-element analysis of an Onshape Part Studio in three simple steps (well, actually four). After completing the first one, you will be able to go back and forth through the remaining three, which are the main steps of the CAEplex approach.

After subscribing to CAEplex in the Onshape App Store, open the Document that contains the Part Studio you want to analyze. Click on the plus “+” sign in the lower toolbar, go to “Add application…” and pick “CAEplex.” A new tab will be created, from which you can select the Part Studio and pick the problem type you want to solve: mechanical or thermal. 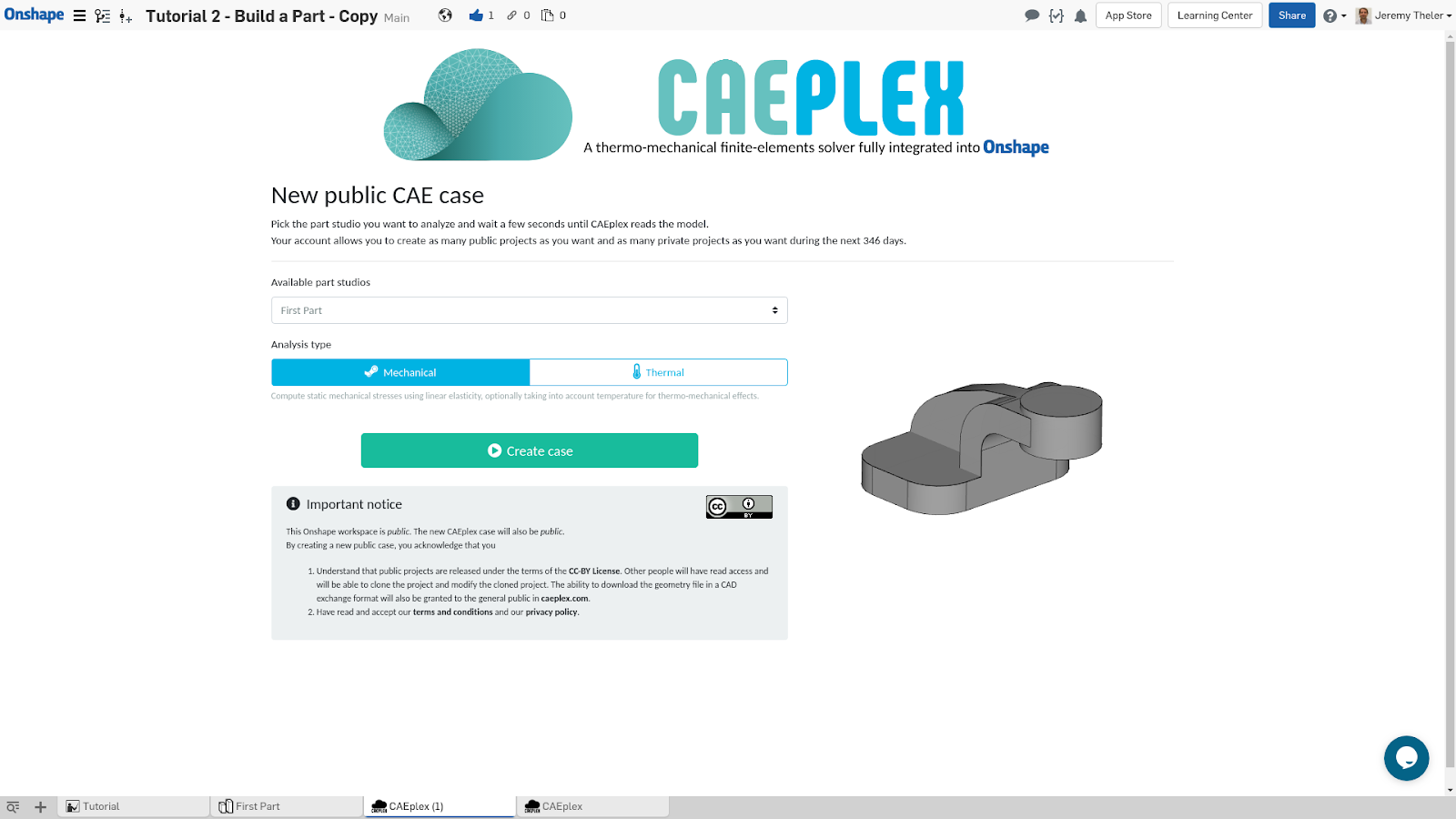 You can access hard-to-reach locations by clipping the geometry or by hiding surfaces with the toolbar from the right. You may include optional volumetric loads such as self-weight and/or a temperature distribution to take into account thermal expansion. 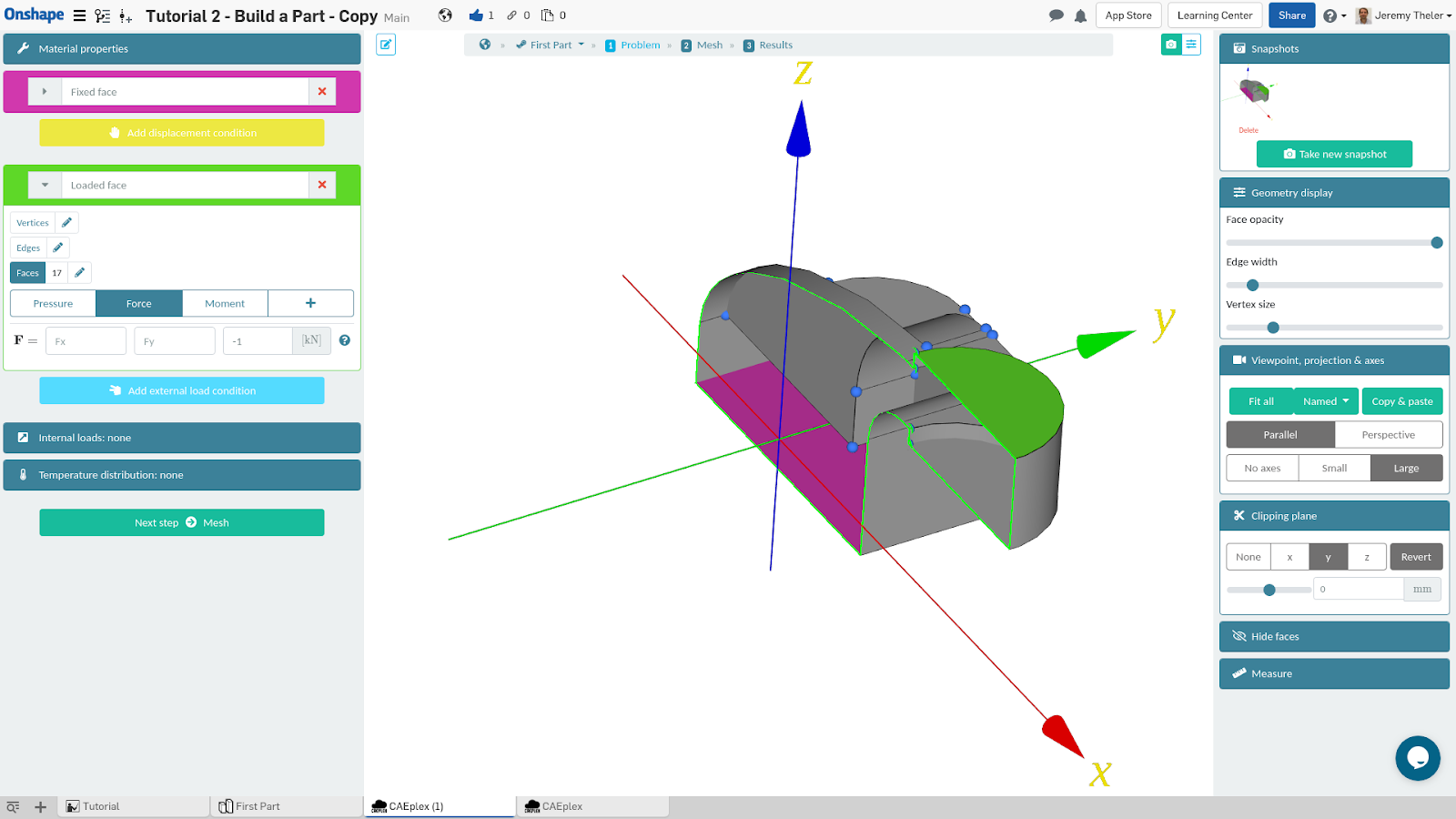 After completely defining the continuous problem, it is time to create a finite element mesh. Either first or second order tetrahedra can be generated using a few different 2D and 3D algorithms. You can locally refine around certain faces, edges or vertices. In the event that the mesher fails and a suitable grid cannot be generated, please contact our support staff with the chat button at the bottom-right corner of our website.

All meshing errors can be fixed by a suitable set of settings and/or by slight modifications of the original CAD geometry. Keep in mind that CAEplex aims at ease and speed. If you need to solve a many-solid problem with complex interfaces, you might be better off with the magnificent beast above. Or you can even use a tool that avoids meshing in the first place. 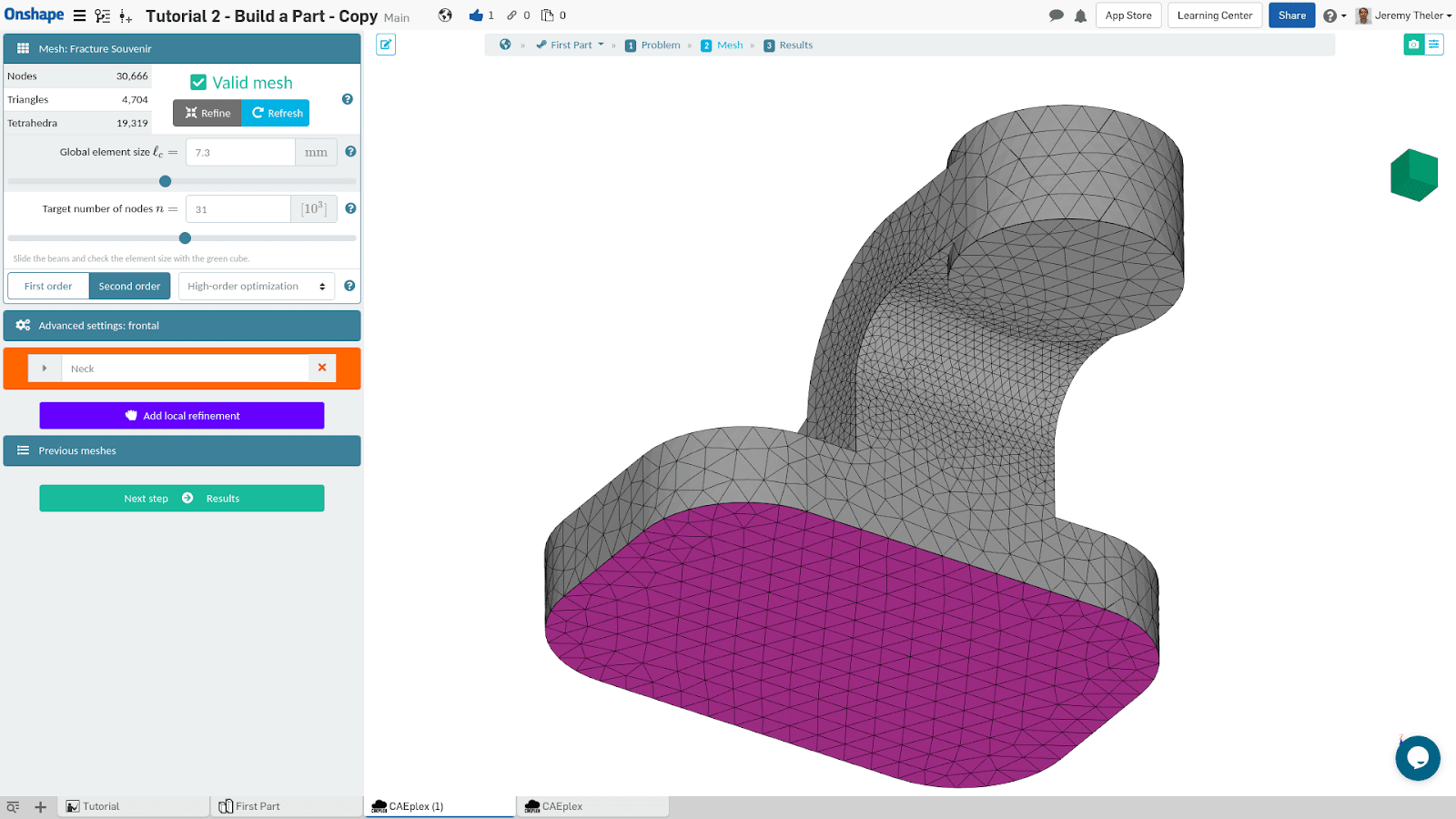 After CAEplex builds the stiffness matrix, solves the linear problem and computes the stresses out of the nodal displacements, step #3 shows a colored map of the resulting Von Mises stresses.

Displacements can be lively warped by dragging the slider, thus checking that the loads had the correct sign and lead to the expected directions. A comparison of the warped grid with the original can also be shown. Besides Von Mises stresses, you can check Tresca and the three Principal stresses along with displacements as scalar fields. The scale can be changed interactively and a full VTK file can be downloaded for further post-processing with an offline tool such as ParaView or Mayavi. 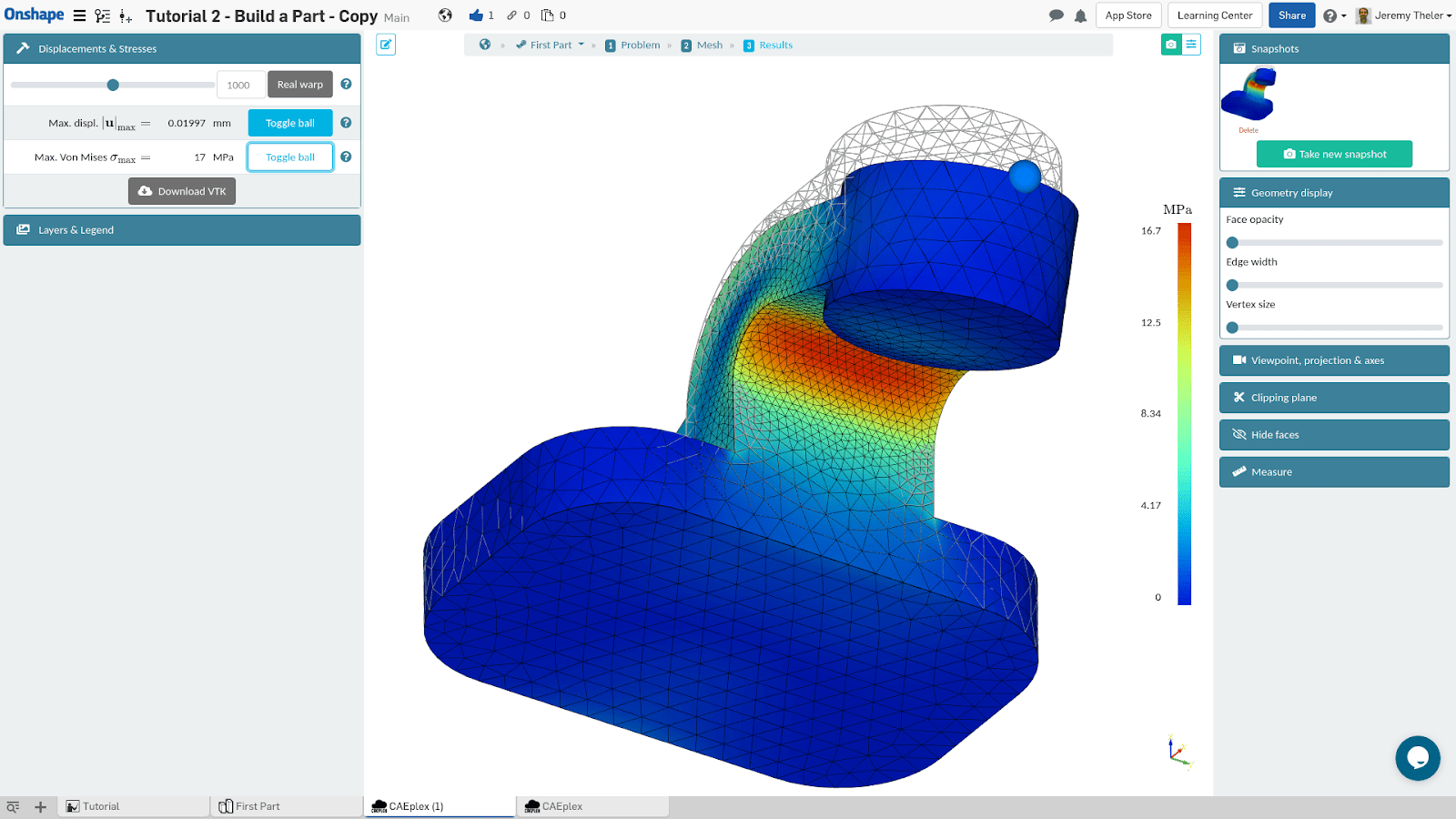 Let us now address thermoelastic expansion of finite cylinders by considering a simple cylinder of radius standing on the - plane subject to the following temperature distribution:

The question is: What are the displacements that this non-trivial temperature give rise to? The good news is that CAEplex has an algebraic parser: Input boxes can handle not just regular numbers, but expressions like 1/2 instead of 0.5 or sqrt(pi/3) instead of square root of . For mm the temperature can be simplified to 1-x^2-y^2, so that is what we write as : 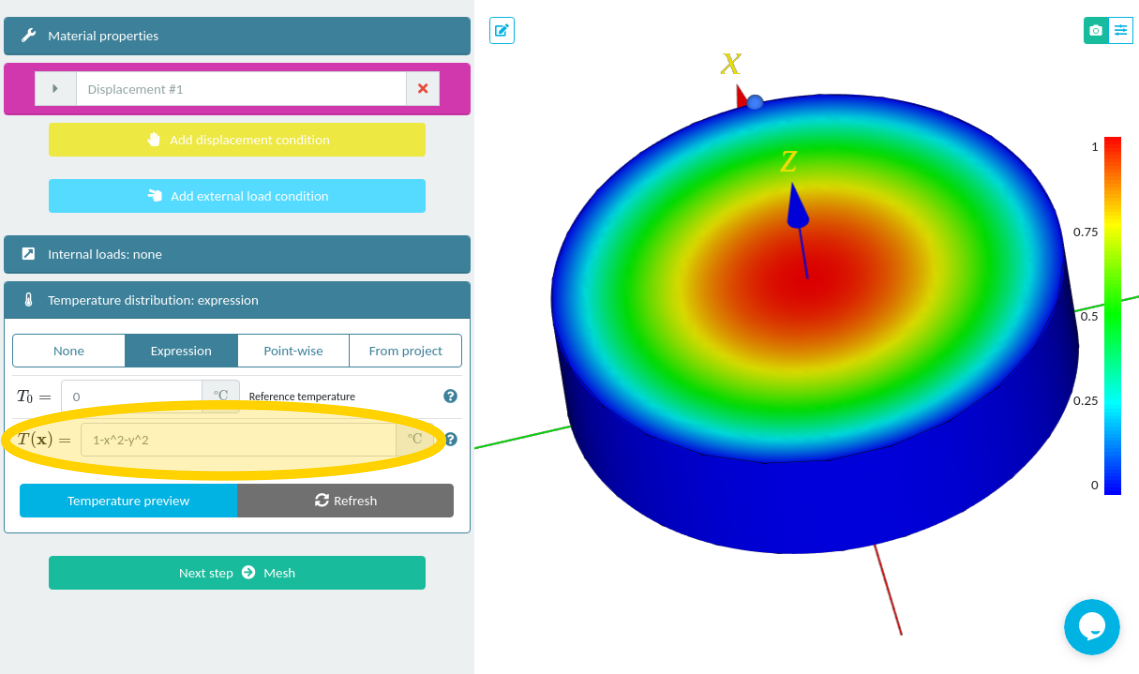 After solving the problem, we can get a report or presentation-read image (i.e. with transparent-background): 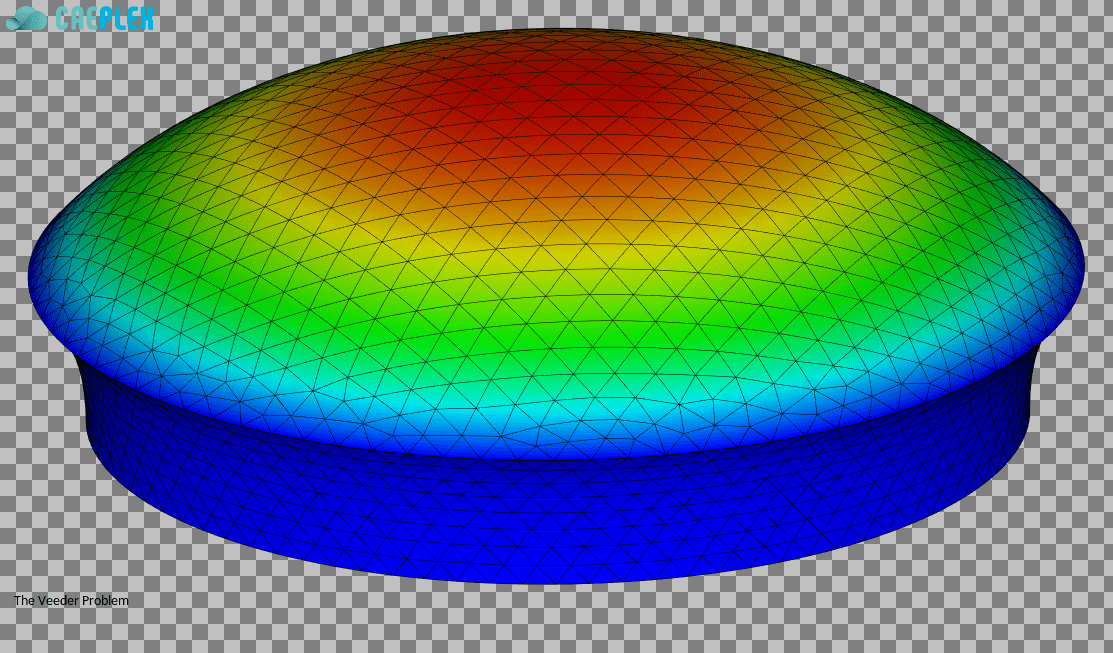 What if we do not have an expression? CAEplex can interpolate 3D scattered data. But the best approach would be to perform the coupled thermal-mechanical computation, right?

Well, yes but it is not a real “coupled” problem, because (in the linear approach) the mechanical part does not influence the thermal problem. They are two linked problems.

So first we can solve thermal conduction to obtain the temperature distribution and then read it back from the mechanical problem. Instead of writing an algebraic expression, we pick the thermal project from the combo. Note that it is not needed to have the same mesh in both the mechanical and thermal cases, only the same geometry. Actually the thermal problem should use first order elements while the mechanical problem should use second order ones. Even more, local refinements should be performed at different locations. Traditional FEM programs usually do not allow this kind of flexibility.

New Features and Updates in CAEplex

All the benefits you get when using a 100% cloud-based product like Onshape (such as automatic updates and unmatched speed) also apply to CAEplex. This is possible due to a careful bottom-up design. Even more, Seamplex, the company behind CAEplex, also developed the free and open source finite-element solver it uses from scratch.

Therefore, Seamplex controls the full spectrum of the computation.

Our development team is continuously improving CAEplex and adding new features, both to the interface and to the solver. Upcoming releases will include extensions like a report generator, parametric analysis of mesh convergence, computation of linearized ASME stresses, and material libraries. Stay tuned for some exciting announcements soon!