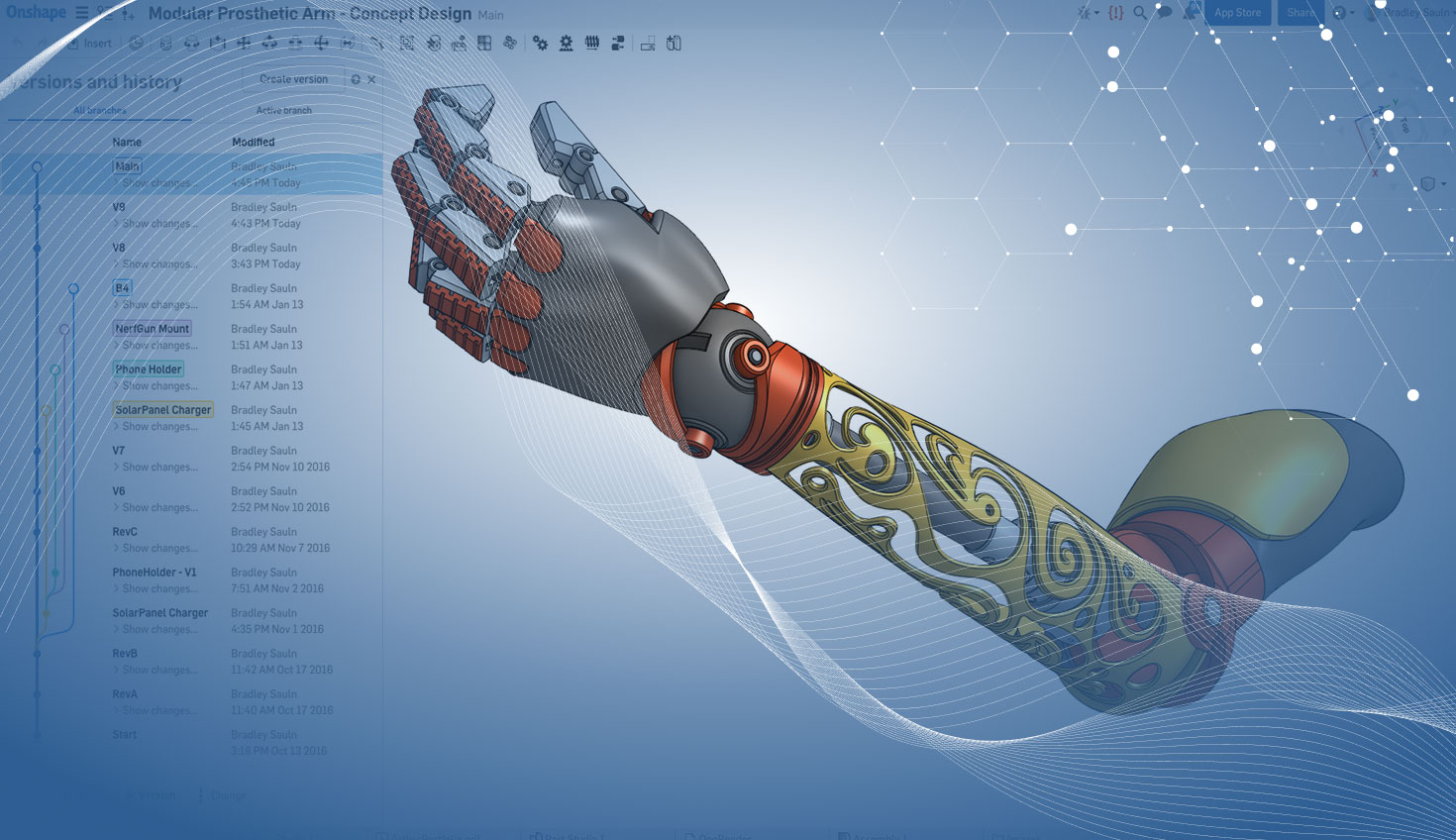 Can Industrial Design be Beautiful?

Just like Apple puts creativity into the look of most of its functional objects – such as power cords and internal packing materials – medical industrial designer Arthur Hobden sees opportunity to infuse art into unexpected products. With much of his career devoted to prosthetics, the Toronto designer believes that the aesthetics of artificial limbs have been ignored for too long.

The modular prosthetic arm above, which features an interchangeable outer shell for customization, will soon be displayed at the Montreal Science Centre. Designed completely in Onshape, the arm will be part of a museum exhibit exploring how 3D printing helps people personalize every aspect of their lives.

“I’ve always been interested in emotional design. The industry is really focused on making functional arms and legs, but there’s a lot of emotional weight that comes with being a new amputee,” says Hobden. “There’s a lot of self-image issues, there’s PTSD and it takes years to build yourself up again. So the fact that this product that hospitals are giving out doesn’t address these issues is a great loss. This is an aspirational piece – everything in my model is designed to look cool.”

Hobden’s fascination with biomechanical design traces back to when he was a young child. “When I was a kid, I wanted to build robots and I wanted to be a cyborg. My crazy dream was that I would have robot parts one day. So I don’t think it’s accidental that I gravitated toward prosthetics. I’m happy that I’ve been able to help improve people’s lives."

Hobden uses Onshape at work and wanted to test the full-cloud CAD system’s limits in his spare time to develop the museum project.

Industrial designer Art Hobden with some concept sketches of artificial limbs. His work will soon be featured in a new exhibit at the Montreal Science Centre.

“Onshape is our go-to CAD when it comes to sharing, collaborating, and versioning. It's also just a lot more intuitive and user friendly – especially when you're working on really complex designs. The interface doesn't bombard you with warnings and extra buttons and icons everywhere. They've engineered the user space to really reduce your stress.”

“If you try and do something (in traditional CAD), and you go back into the feature tree and change up a sketch, there's six different warning signs that come down, everything turns red, the whole thing breaks down, and your model's gone,” he adds.

“It's a platform that allows me to insert myself into anyone's creative thinking process or project, and allows them to quickly access industry-leading tools,” he notes. “I also like how Onshape allows me to work on any computer and access my data from anywhere.”

As for his upcoming debut at the Montreal Science Centre (the date has not yet been announced), Hobden hopes the exhibit will inspire designers to rethink “the simplest things we all take for granted.”