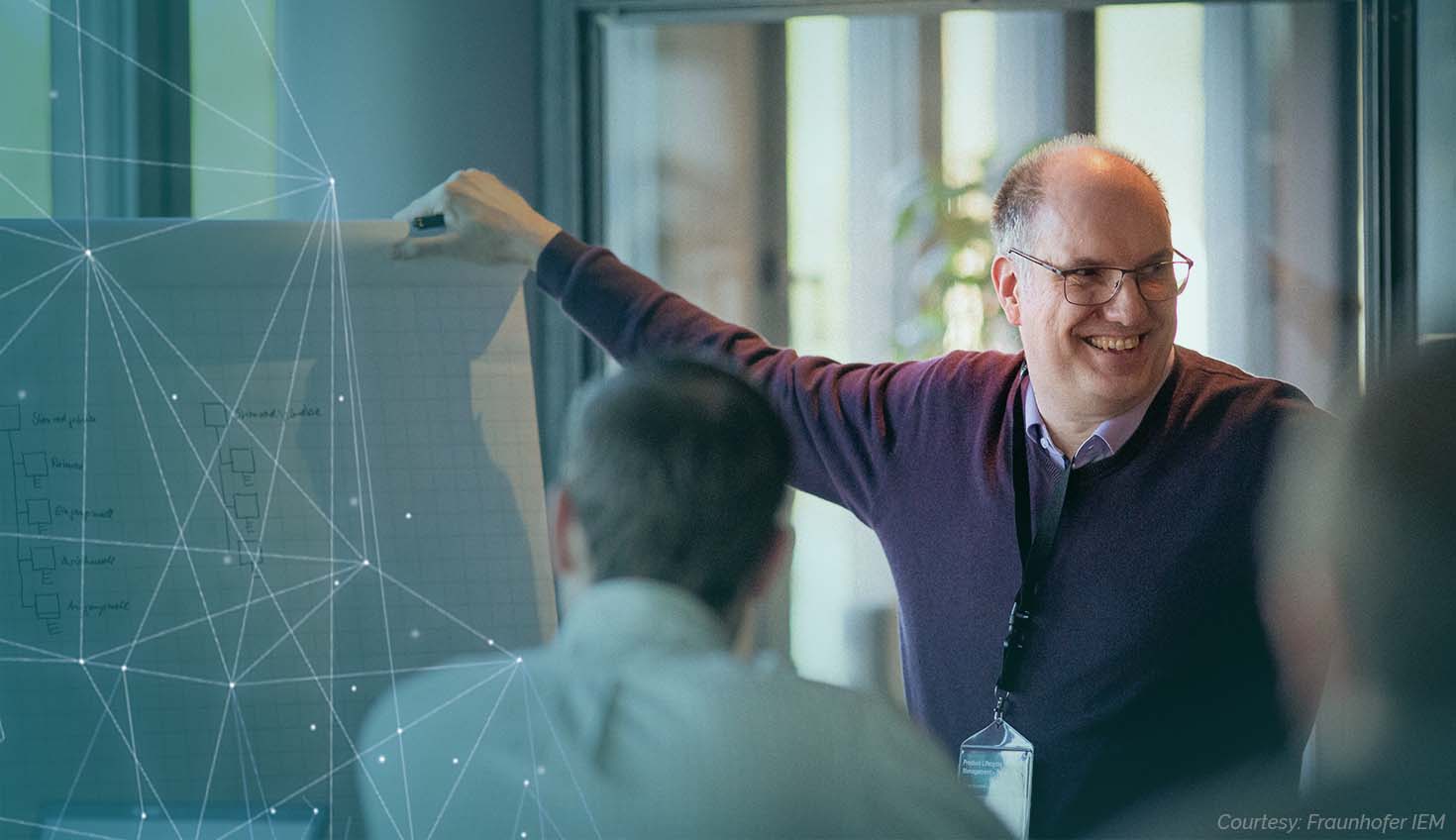 As the largest research organization in Europe, the Fraunhofer Society and its 70-plus institutes have set their sights on a bold vision: to develop innovations to make tomorrow better.

To Peter Ebbesmeyer, making tomorrow better starts with improving every piece of the product lifecycle, from inception to retirement. Each role along the way has to work in synchronicity. A change in one area can depend on or affect the work before or after it. Ebbesmeyer joined the Fraunhofer Institute for Mechatronic System Design in Paderborn, Germany, more than seven years ago as part of a team in the Product Lifecycle Management institute, aligning computer science and engineering.

He brought with him a fascination with three-dimensional computer-aided design, or CAD, and virtual product engineering, as well as years of teaching undergraduates basic engineering concepts. His own career began studying aeronautics and astronautics 30 years ago at RWTH Aachen University, feeding a lifelong interest in aircraft and aviation.

His engineering studies coincided with the early days of 3D CAD and he found himself using it to design work for class. But these were not the CAD systems we know today. “They ran on really large, really expensive machines that cost more than a house,” Ebbesmeyer recalls.

CAD hooked him right from the start. He followed up his engineering degree with a Ph.D. from Paderborn University and became a consultant for product lifecycle management and virtual product engineering. Consulting took him to the automotive industry, an aerospace company, and working on everything from industrial equipment to machinery accessories.

Back to the Basics of PLM

These days, Ebbesmeyer is the central coordinator at the institute for Product Lifecycle Management and virtual product engineering. But when Ebbesmeyer steps in front of his mechatronic design classes – whether internal stakeholders or for Fraunhofer’s industrial clients – one of the tools he uses has a familiar face that crosses generations and disciplines: a LEGO robot.

That isn’t to say what Ebbesmeyer teaches about PLM is child’s play. Rather, the opposite is true.

While his course is packed with students pursuing master's and doctorate degrees, they range in specialties from mechanical engineers to electrical engineers, to computer scientists, and even business graduates. This differentiation is largely due to the various expertise needed as a product moves from concept through launch, manufacturing, distribution, and on to the end of the product’s life.

Once the LEGO robot found its way into his classes, Ebbesmeyer had a concrete example to point back to, and his students began to better understand each other and their own roles. He begins by asking his students to build a LEGO robot from simple parts, such as bricks and cables, and motors. They learn how to build the robot and make it function. Ebbesmeyer can then use that robot to illustrate the CAD structure to those who have never used any kind of computer-aided design platform before. The LEGO robot helps him better explain the differences in the CAD bill of materials, or BOM, and the manufacturing BOM and engineering BOM. Without the robot, Ebbesmeyer suggests some of his more beginner students would have a harder time keeping up with the more experienced ones.

Although the robot solved one issue, the CAD platform could have been a significant hurdle, and one he couldn’t ignore due to its central role in the product life cycle. When he first arrived at Fraunhofer, Ebbesmeyer used one of the stalwart tools in three-dimensional CAD – SOLIDWORKS.

But Ebbesmeyer believes every new tool should answer some key questions. “Does it feel good? Does it help the engineer? Does it work?”

The legacy CAD platform fell short, requiring time for installations and troubleshooting, and often intimidating his students without a background in engineering.

When he first heard of Onshape, Ebbesmeyer was immediately intrigued by the cloud-based option and became an early adopter. He was impressed with the foundation of legacy CAD tools and its new approach, which he sees as having great potential for the long term.

“During my whole career, I’ve always focused on technology and new technology that makes the life of engineers better,” Ebbesmeyer says. “If there’s an interesting tool, I want to try it. I want my hands on that.”

He could visualize Onshape’s Software-as-a-Service (SaaS) approach vs. the traditional Windows-installed alternatives as a more intuitive and accessible way forward.

One initial draw was that Onshape didn’t require the installation of a local client, Ebbesmeyer says. Onshape works on Android devices or iPads – and Ebbesmeyer has tried them all.

“I’ve tried it all,” he says. “If you have to do a complex CAD, it’s easier to work on a laptop computer, but you have all the possibilities on a tablet or a phone.”

His students hail from such a wide variety of backgrounds that he never knows what type of device they might bring to class. Because Onshape is like the Google Docs of CAD, all the students need is a web browser and internet connection to get started.

But his affinity for Onshape didn’t end at the installation (or lack thereof). Ebbesmeyer says Onshape is an intuitive and user-friendly tool, especially for those who have never seen a CAD model before his class but still need to understand the concepts of product lifecycle management.

"It's really not much of a problem to get used to these tools and working with these linked documents, navigating the source, reading the model – even if the person has never done that before. And for most of them, it was really fun to work here. That's learning.”

Once the students have built a robot and learn how to make it work, they can share Onshape links to navigate through each other’s model – without editing it – to understand how it's built up and how the system functions. The power of collaboration is incredibly strong and differentiates from legacy CAD in this way, he says. “You can constantly save your work on the database, so you can roll back to each and every point in your design history and move on from there.” This methodology vastly improves versioning and is a completely new concept to mechanical engineers, he says. “To see the full power, you need to work a little bit with it.”

For his LEGO robot project, Ebbesmeyer says he personally used Onshape to try out a number of parallel pathways to find the right tracked robot system for the class. He built out several branches and then, once he was satisfied with the final design, merged everything into the main branch to work on as the final concept.

If you want to do this in other CAD products, you need to create entirely separate files, he says. “You do not have it in one document. You do not have the possibility to compare it and see the pros and cons,” he says.

The Path to the Future with Cloud-Native CAD

Because the database behind Onshape is document-based instead of SQL-based, Ebbesmeyer feels it is more scalable and flexible. “Working on the beach is no problem as long as there is a strong Wi-Fi connection.”

Ebbesmeyer predicts Onshape’s technological advantages will be implemented in other engineering tools in the future because they are so powerful.

“I'm looking forward to seeing what's happening next and how or what technology will move us,” he says. “I do believe that the technology behind Onshape is on the leading edge in terms of technology use for future engineering tools, and I believe that other vendors will follow this path.”

In the meantime, Ebbesmeyer continues to use Onshape for his own projects. “If I have to do CAD modeling right now, today, these days, I would say about 95% of the work I do is with Onshape.”

For his students, Onshape’s ease of access and collaboration capabilities fast-tracks the skills they need to further their careers.

Ready to join the millions of Onshape users from around the world? Learn more about Onshape for Education and how cloud-native CAD is transforming the classroom.

Get started with Onshape and join millions
of students and educators worldwide.