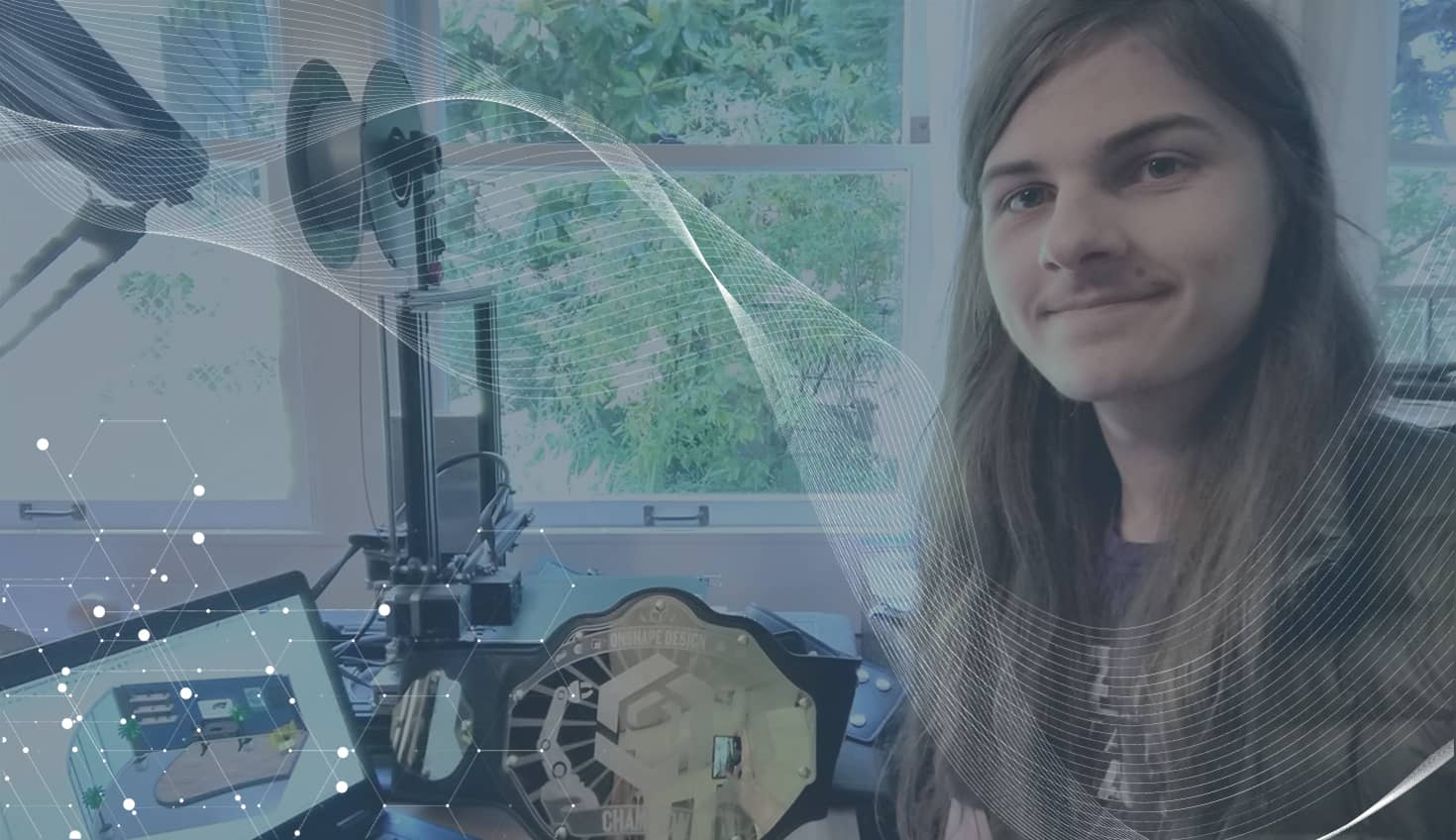 Why Interning at Onshape is a Dream Come True

I've been an avid fan of Onshape since I first used it for my high school robotics team.

Now, I use the software for student engineering projects at the University of Washington — and, even better, as an intern in the R&D department at Onshape!

I am extremely passionate about CAD, and having a hand in developing its future is my dream job. Working as an intern here is sort of like having an internship at Stark Industries or on the Starship Enterprise: I get to see the future every day. The people and technology here are fantastic, and I’m learning so much about best practices in product development all of the time.

How did I wind up here? How did I get into CAD in the first place?

The first 3D software I ever used was SketchUp. It seemed unreal that I could push some buttons on a computer and get a 3D model out. As a teen, I shoehorned it into everything, from geometry class projects to language arts assignments. My favorite early project was designing a parabolic solar cooking dish, which focuses the sun’s rays to cook your food. This was my first prototype, but it did an adequate job warming up marshmallows and hot dogs. Take a look! 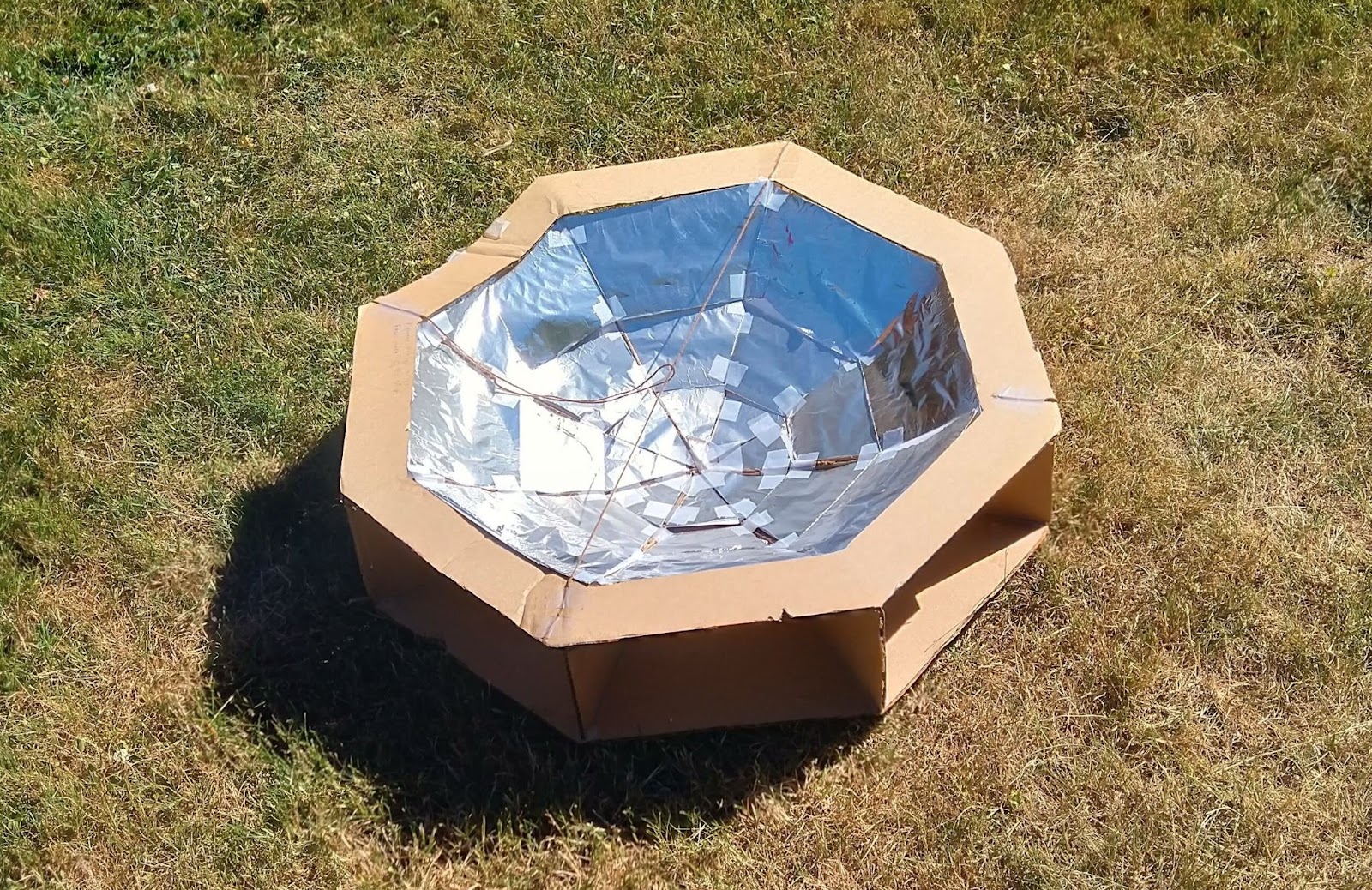 Reflections from a High School Engineer

A neighbor later introduced me to Blender 3D modeling software, and it changed my world again. Not only could I make a 3D model, but I could make it look realistic. I started sharing what I made with my friends and family and posting it online. I even got the newly-created “Best Blender Fanboy” award from my high school FIRST Tech Challenge robotics club, Garfield Robotics in Seattle.

However, my robotics club used Autodesk Inventor. It was not a fun time. We did not have install permissions on the school’s computers, so we could not install Autodesk Vault, and our version of Inventor was always a year out of date. Collaboration happened through a chaotic shared network drive. Unsurprisingly, data management went terribly. 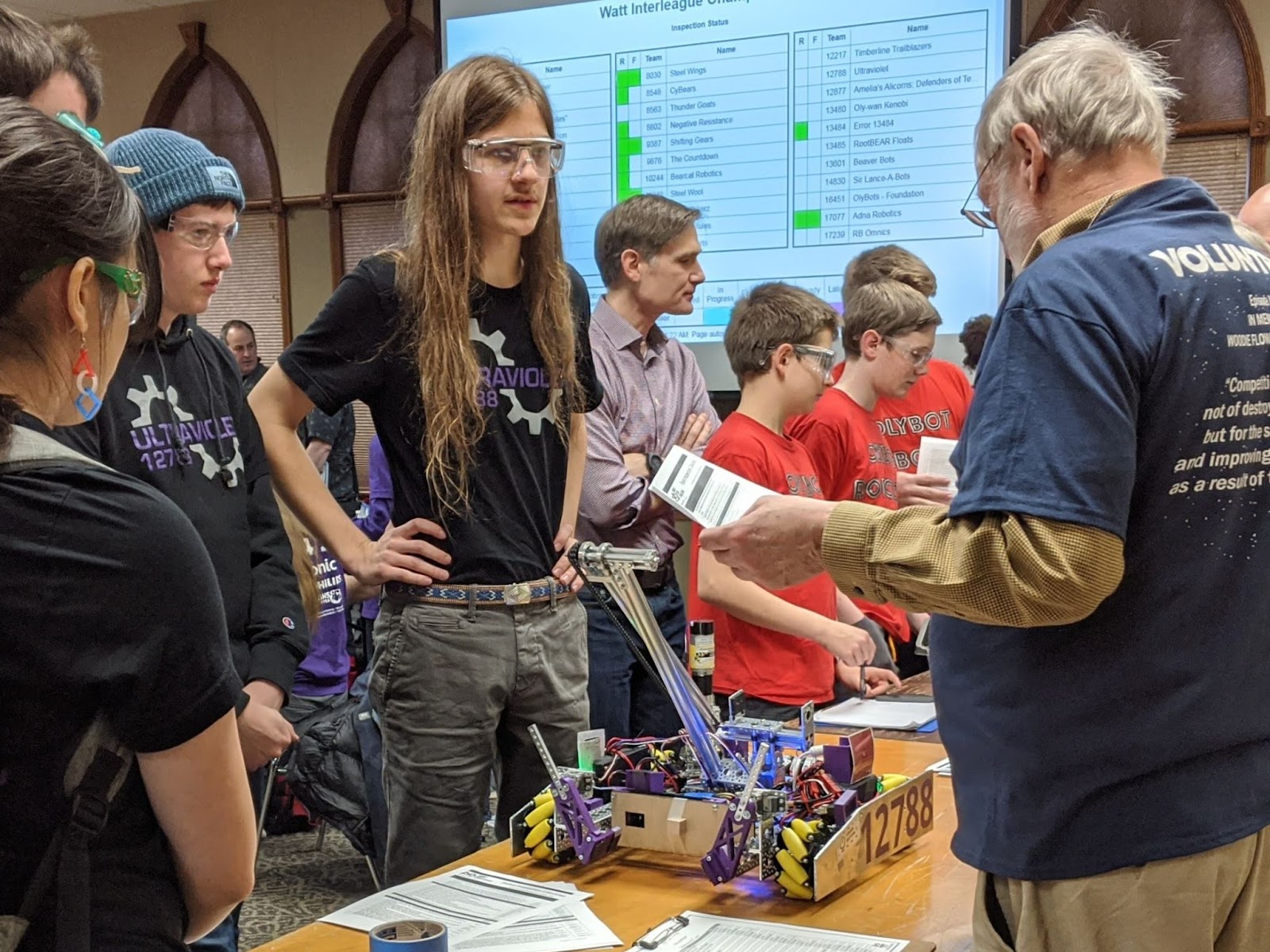 It is not an exaggeration to say my robotics club’s mechanical team spent the majority of its time fighting Inventor. From corrupted, reverted, and lost work to collaboration difficulties, we lost tons of time we could have spent designing and building.

Toward the end of sophomore year, I gave Onshape a try and instantly liked it. The critical game-changers were real-time collaboration, reliability, and compatibility with my teammates’ computers running Linux, ChromeOS, and macOS.

But my team still expressed a lot of hesitancy about switching CAD systems. Could a browser-based CAD system handle our assemblies? What would happen if we lost our internet connection? Why should we change if the system we have right now worked previously?

All of these concerns ended up being non-issues:

The cloud-native CAD experience was a breath of fresh air for us. With Onshape:

After I graduated, the Garfield Robotics team had another successful year, despite the pandemic. With Onshape, everyone could fully participate remotely, resulting in a refined design that swept the awards at the inter-league level for the FIRST Tech Challenge. They won the most prestigious Inspire Award and received second place for almost every other award.

How Did I Wind Up With a Championship Wrestling Belt? 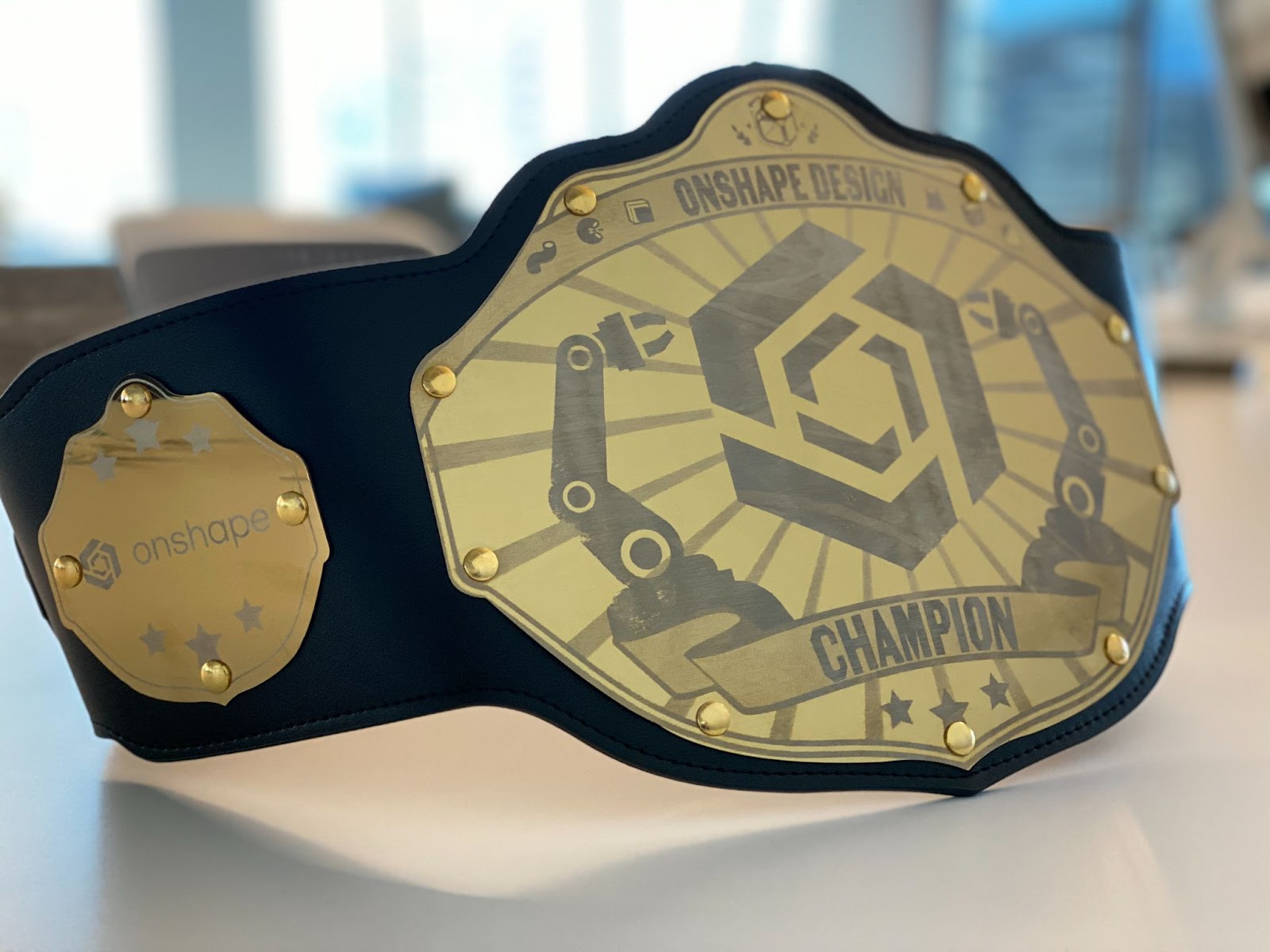 The majestic prize awarded to the winners of the first Onshape Design Competition.

Fast-forward to March 2021. I was winding down my freshman year at the University of Washington in Seattle, where I’m pursuing a double major in applied physics and applied math (CAD and CAE live at the intersection of so many topics in these fields). When I found out about the first-ever Onshape Design Competition, I knew I had to enter.

I found my partners on the extremely welcoming Onshape Forums. Together with my teammates Evan Reese, Head of Design at Ovyl (Nashville, TN), and Michael Pascoe, a mechanical engineer at Cache River Mill & MetalWorks (Little Rock, AK), we took home first prize, the spectacular CAD championship belt pictured above!

Aside from the classic Onshape collaboration use case of engineers in three different states working together as if they are in the same room, there’s an even bigger dynamic at play here. How did a college student and two established career engineers who never met each other wind up as teammates in the first place?

To learn the answer to this question, read this blog. But here’s a hint: It has something to do with the generous spirit and camaraderie of the Onshape engineering community. I’m lucky enough to experience that kinship as a regular participant in Onshape User Group Network meetings, where engineering students and professionals talk as peers.

Onshape User Groups allow CAD enthusiasts to share tips with each other and get feedback on their latest projects.

Not surprisingly, I found my internship opportunity by being an active member of the Onshape User Groups.

Helping to Build the CAD System I Want to See 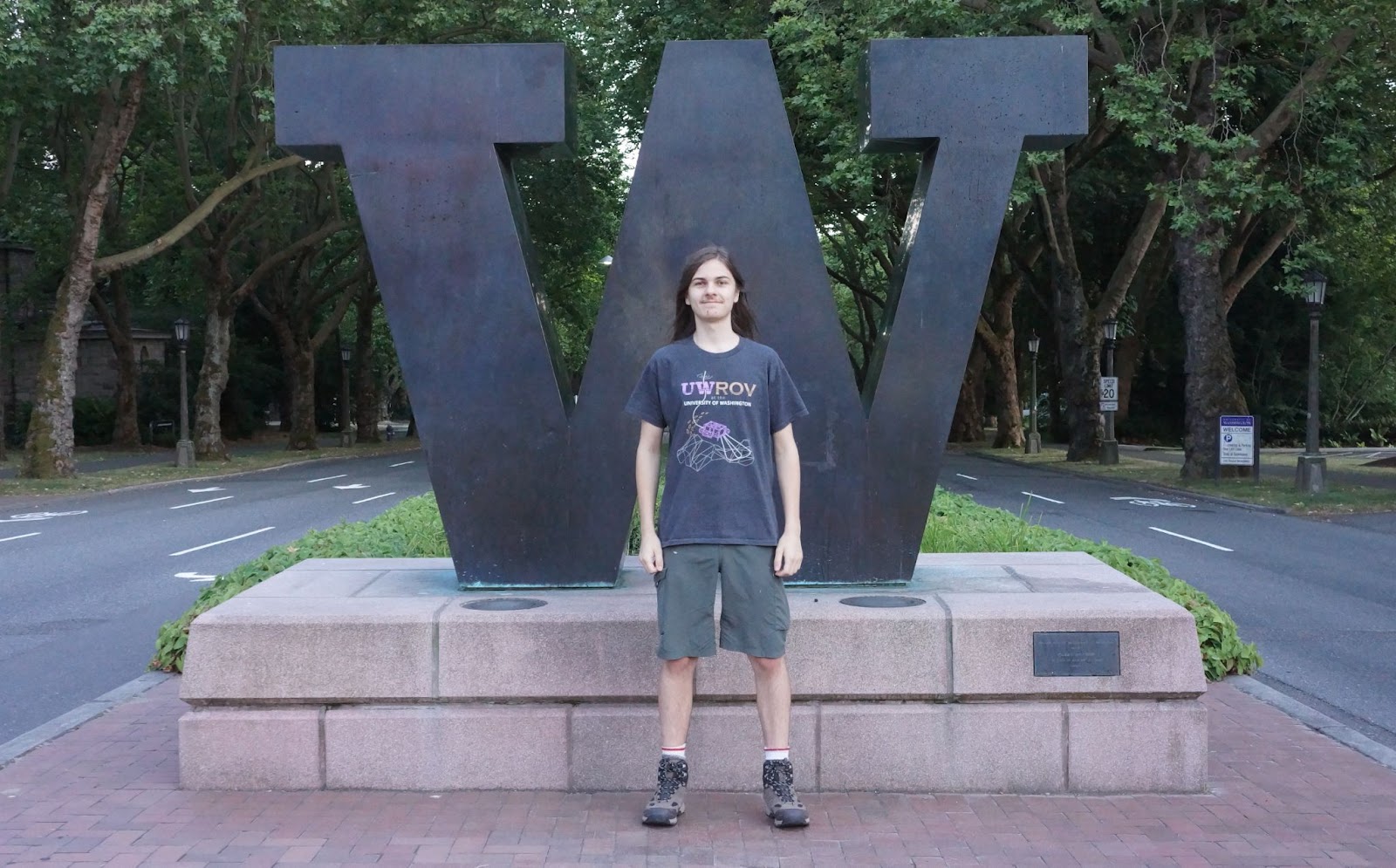 University of Washington student Alnis Smidchens, a rising sophomore, is a Product Management intern for Onshape.

After speaking to Onshape employees to get to know the teams and work available here, I decided that a Product Management internship would be the most interesting since it connects me with all areas of R&D at Onshape. I have been working on four main projects here:

Along the way, I’ve also had the opportunity to work on some fun side projects, including data visualization, promotional materials, and writing custom features. There is never a dull moment at Onshape, and I am very excited to work on many projects with a positive real-world impact on customers.

I like to use the word “futuristic” when I talk about Onshape, but it is by no means waiting for future development to become useful. Onshape is a platform making a difference right now, revolutionizing communication, collaboration, and productivity in real-world, day-to-day engineering and design work.

If you’re an engineering student, I’d encourage you to get a head start on the system you’ll likely be using when you graduate. It takes less than two minutes to get your free Onshape Education plan — give it a try today!