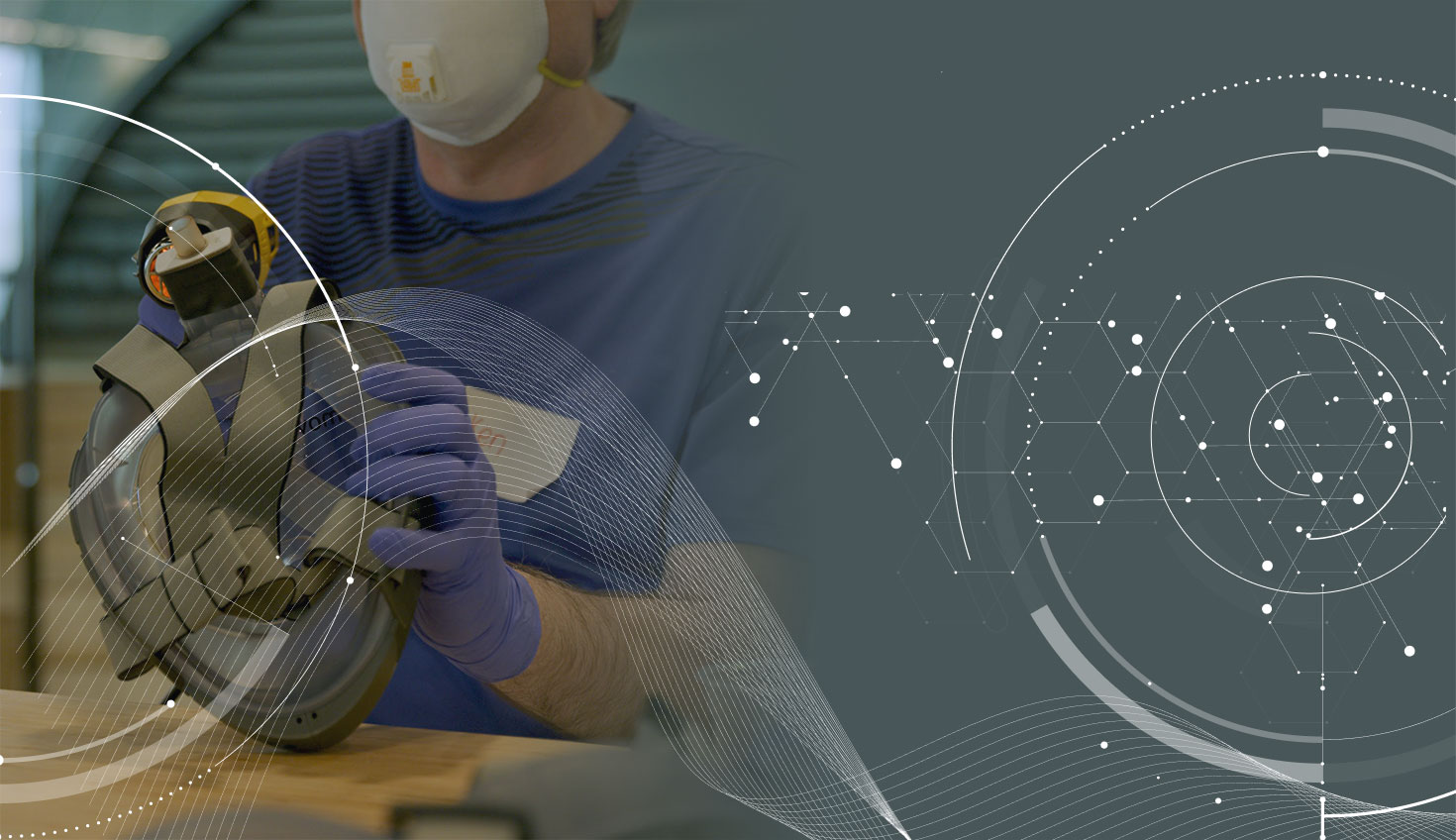 If a month ago you had asked software developer Varun Mani to name his top productivity tools, his 2012 Volkswagen hatchback wouldn’t have made the list.

But lately Mani, the VP of Advanced Research for Vuforia at PTC, spends his evenings crisscrossing across Greater Boston making special deliveries. When his daily Vuforia programming routine winds down, his volunteer courier shift begins – shuttling an experimental protective breathing mask to doctors’ homes and hospitals for testing.

The deliveries are for MasksOn, a three-week-old nonprofit organization addressing the dire shortage of medical personal protective equipment (PPE) at hospitals in Boston and across America during the COVID-19 pandemic. Combining the expertise of Boston’s medical, academic and tech communities, MasksOn is repurposing full-face snorkel masks to design and manufacture durable, reusable and sanitizable protective gear for high-risk clinicians in direct contact with COVID-19 patients. The snorkel mask is attached to a medical-grade filter (types that are still widely available to hospitals) using a custom-engineered 3D-printed – and soon to be injection-molded – adapter that creates an airtight seal over the snorkel holes.

“I was super dubious about the idea at first,” says Mani, recalling a recent delivery to a doctor waiting for him in the hospital’s parking lot. “So I asked the doctor, ‘Is this even helpful what we are doing here?’ And he says, ‘You have no clue. We are literally going to run out of masks in a week, and this is going to be so important. Not today, but literally in a week.’”

“Nothing against my day job, but when 5 o’ clock rolls around, I’m thinking ‘Oh my God, I’m now working to help save lives.’” 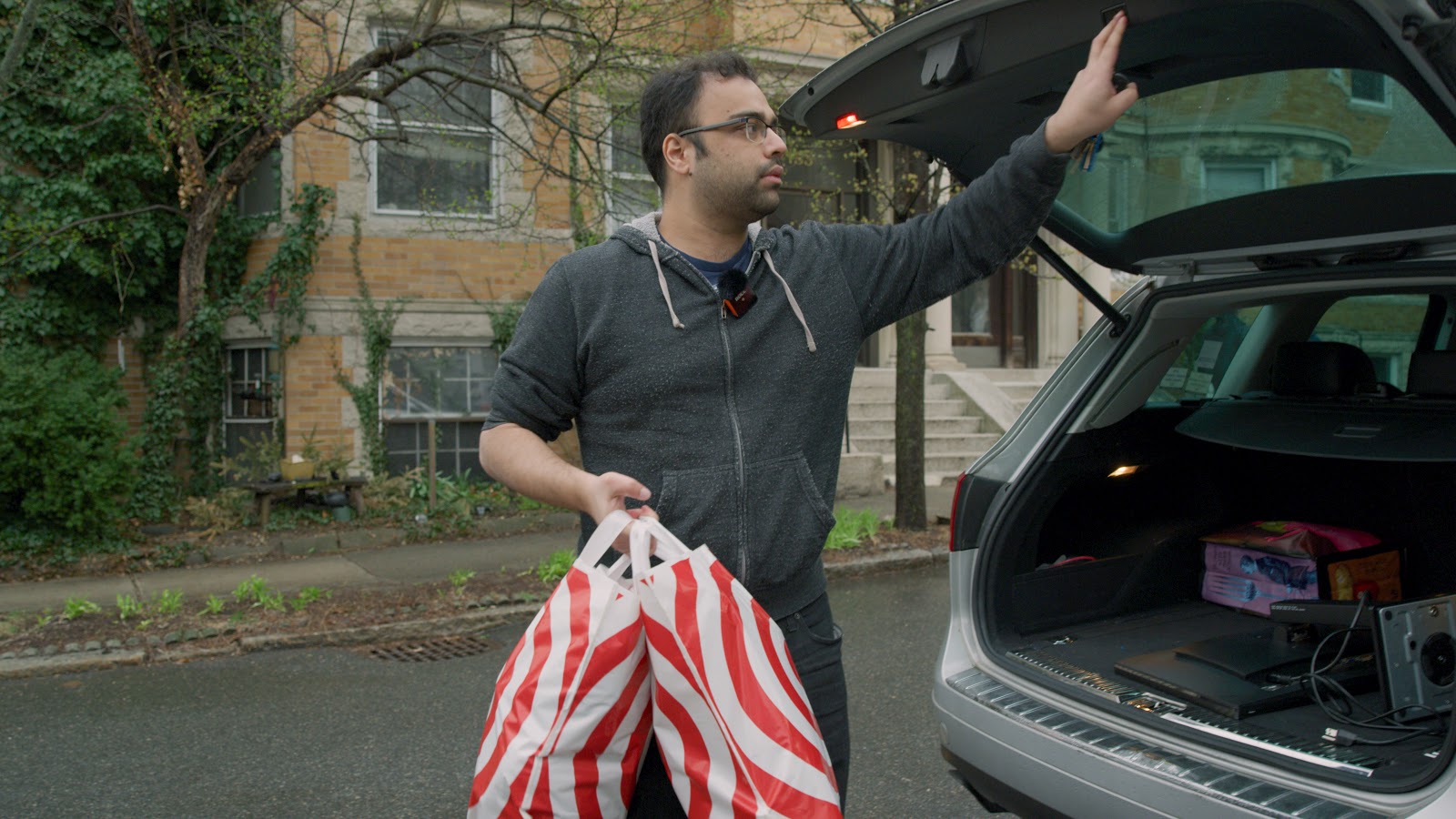 PTC volunteer Varun Mani, who is contributing his automation software development skills and his driving skills to the MasksOn effort, makes a recent delivery of durable protective gear for testing. (Photo by Alex Pickering)

Mani’s experience with doctors’ appreciative feedback was echoed in a text message that volunteer John Rousseau, VP of Tech Ops for Onshape at PTC, recently received from a partner hospital:

It typically takes months for a new medical device to get approved by the US Food and Drug Administration (FDA). The MasksOn prototypes are meant to be used as a last resort only, and follow recently introduced FDA guidance that permits the use of non-FDA-approved experimental devices and gives guidelines for appropriate warning labels:

The idea for modifying a diving mask for medical use came from Dr. Jackie Boehme and Dr. Alex Stone, colleagues at Brigham and Women’s Hospital. According to MasksOn, Stone was inspired by a snorkeling experience in Hawaii. The two doctors later reached out to Eugene Mann, a Google product manager, to help explore the concept – and in mid-March they recruited volunteers online from area universities, hospitals and tech companies. From ideation to execution, MasksOn might be the fastest startup launch ever. 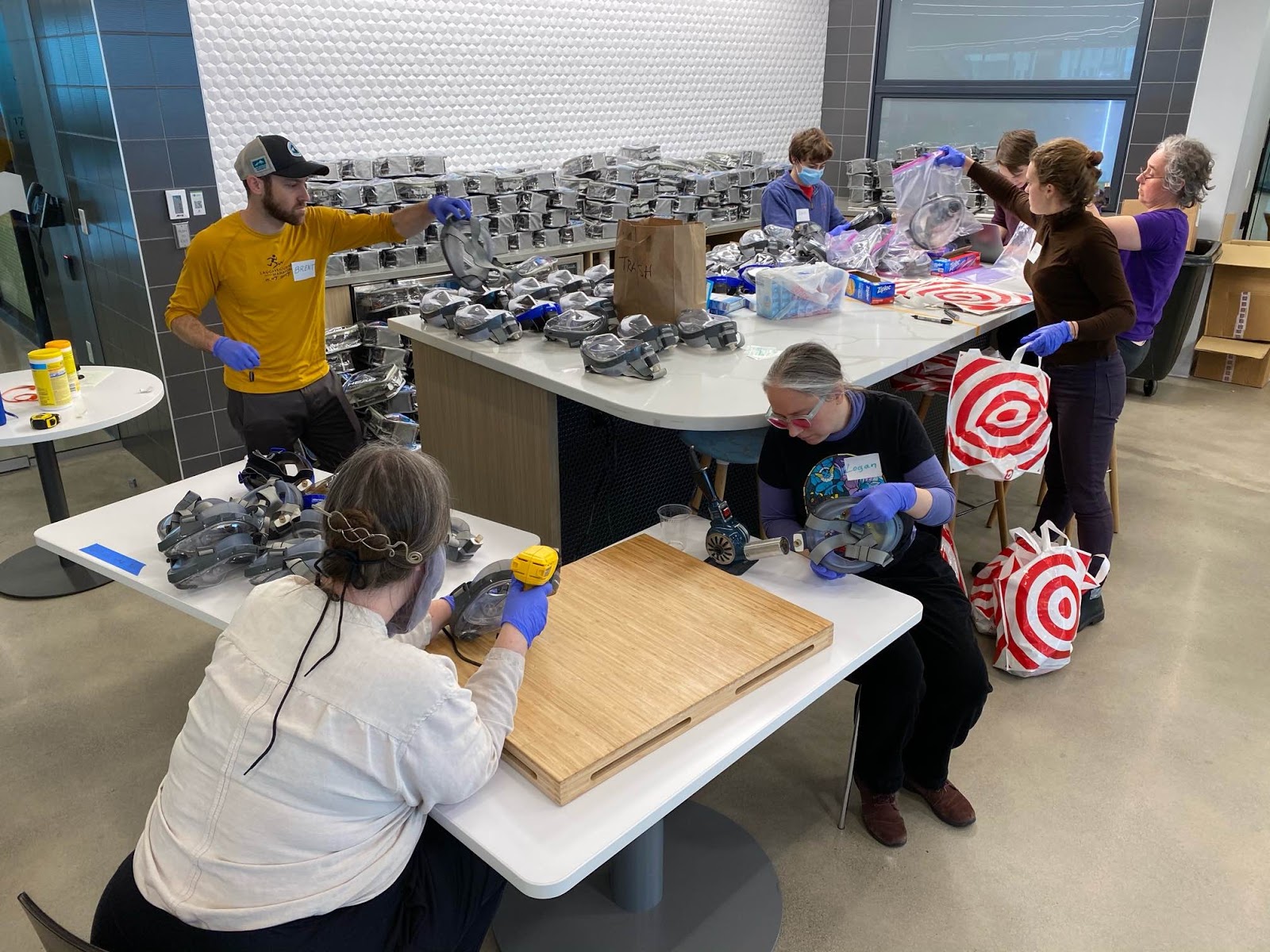 The 17th floor of PTC’s Boston Seaport headquarters – usually reserved for company meetings, employee socials and presentations – has been transformed into a prototyping lab for developing and testing protective equipment for healthcare workers. (Photo by Alex Pickering)

MaskOn’s immediate goal is to produce and deliver 50,000 durable masks over the next 3-12 weeks, giving highest priority to anesthesiologists who operate ventilators, surgeons who perform emergency procedures on COVID-19 patients, and others who are most exposed to airborne forms of the coronavirus.

The design, experimenting and prototyping of the masks was first done on the top floor of PTC’s Boston headquarters. The custom adapter prototypes, tooling and other components were 3D-printed in PTC’s maker lab.

“We basically turned the 17th floor into Tony Stark's lab and testing facility,” says Bradley Sauln, a Senior Technical Services Engineer for Onshape at PTC. “We have one half of the building completely dedicated to prototyping and testing the adapters for their fit. On the other side, to the right and left of the presentation stage, we set up two prototype assembly lines.”

According to Tim Andrews, a Quality Assurance Engineer for Onshape at PTC, the volunteer teams have proved it’s possible to assemble a new mask every 45 seconds. That’s roughly 80 masks an hour per line. With two lines operating for 6+ hours, it will be possible to reach the short-term goal of 1000 masks per day.

Andrews is volunteering with many of his colleagues from Onshape’s QA team, which is now using Onshape the same way a customer would for release management during this hyper-agile MasksOn project.

“We’re going through the whole release process in Onshape to make sure the adapter designs are being reviewed by multiple people and approved before they get printed,” he says. “So in the testing, we’ll print out seven or eight adapters with different tolerances and then figure out which ones fit best. My first weekend volunteering we had already gone through revisions A through H.”

“I’ve really been impressed with this team,” adds Andrews. “Some Onshapers like Jason Gainor and Jake Ramsley have been doing this 24/7 and have been sleeping at the office. And I know that they’ve also been working on regular Onshape stuff, too.” 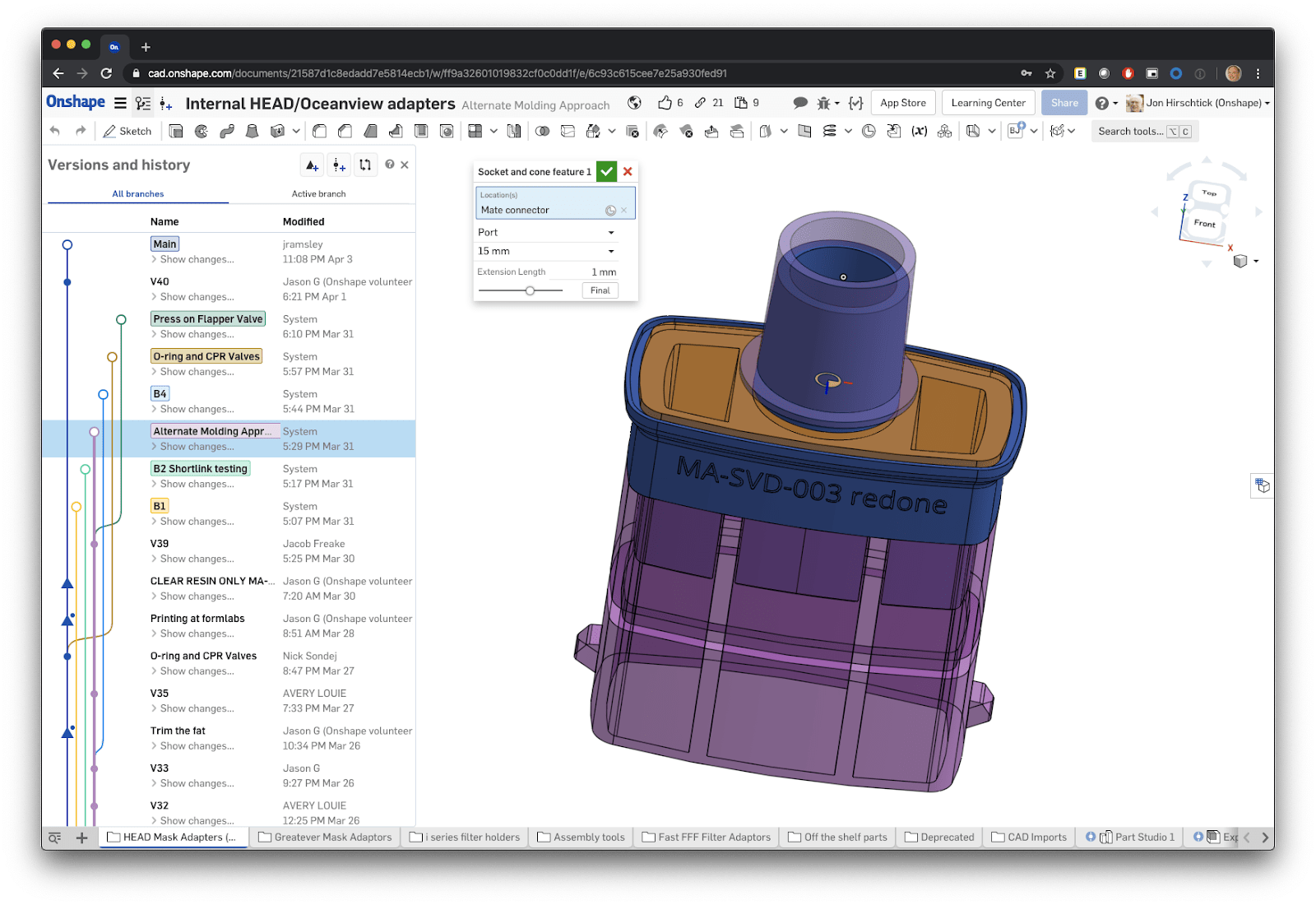 PTC’s Onshape SaaS product development platform, which was built for team collaboration, is being used to design the 3D-printed adapters for the MasksOn project, which is drawing top professionals from medicine, academia and tech.

Ramsley, the Senior Director of QA and Release Management, and Gainor, a Principal Product Definition Engineer, are collaborating with more than a dozen engineers on the CAD models for the custom-designed adapters. MasksOn needs to source its snorkel masks from different brands, so every brand needs its own unique adapter.

Onshape’s built-in data management – which allows multiple engineers to simultaneously work on the same CAD model online and see each other’s feedback and edits in real time – has been invaluable. Even when colleagues are in the same building, they are often in separate rooms, and because of social distancing guidelines are not looking over each other’s shoulder.

“We’re also able to easily share models with the major snorkel mask manufacturers,” notes Sauln. “Almost all of our interactions are remote. There’s no way we could move so quickly if we weren’t using Onshape.”

As with any product development process, the team is constantly evaluating user feedback. One common reaction from doctors so far is that while the snorkel mask is serving its primary role to shield the face, it also muffles sound and makes it difficult to communicate with patients. The MasksOn team is experimenting with different microphones and speakers that would amplify the healthcare worker’s voice – much like a teacher would use in a classroom. 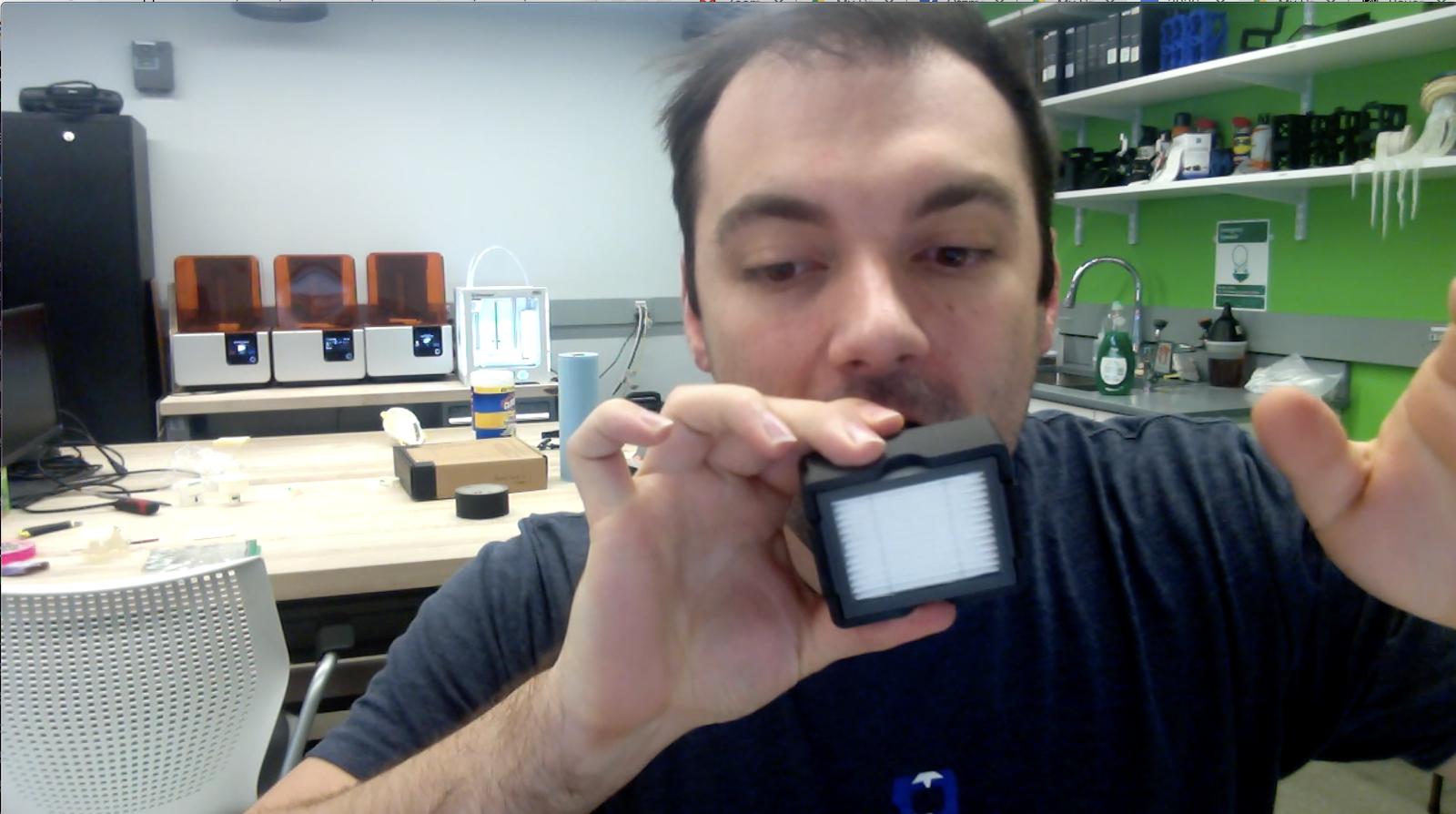 With major interruptions in the global supply chain, the MasksOn team also realizes the need to be prepared for when various components become suddenly unavailable. The operating mindset is recognizing that there isn’t an unlimited quantity of anything – and to come up with contingency plans for when that anything runs out.

Preparing for when the supply of current medical-grade filters runs out, the team has been testing the viability of using vacuum cleaner filters in their place. A study at the University of Cambridge during the H1N1 swine flu pandemic determined that vacuum bags are most effective for filtrating virus-sized particles compared to towels, cotton, and other readily available materials. 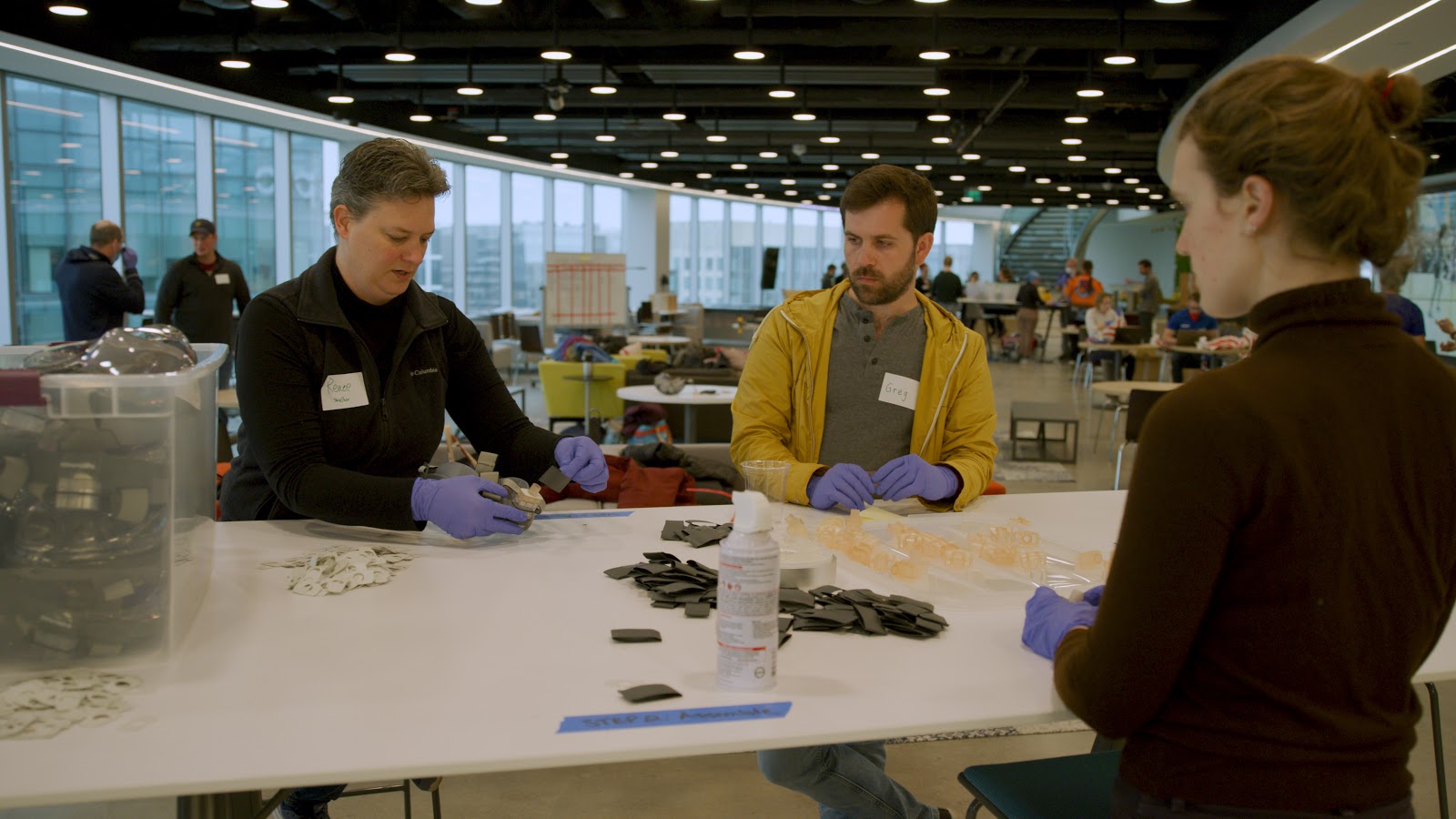 Many others are volunteering as individuals, such as numerous students from area medical schools.

“I went to Olin College and I have randomly met three other Olin alumni from other companies who are part of MasksOn,” says Vuforia’s Mani. “I’ve also gotten to know some of the Formlabs folks helping us 3D print the parts, and some of the people from Google and Tulip helping out on the website/documentation/automation side of things.”

“One of the unexpected things to come out of this is that I’ve also gotten to know some of my co-workers much better,” Mani adds. “The Onshape team moved into our building in January (after being acquired by PTC). Even though we’ve all been working on the same floor, we haven’t interacted that much because everyone has felt a bit awkward. But now I’ve actually met so many Onshape people, and even some ex-Onshape people who have come on board.”

"A Startup Where Everyday We Are Progressing By Three Months" 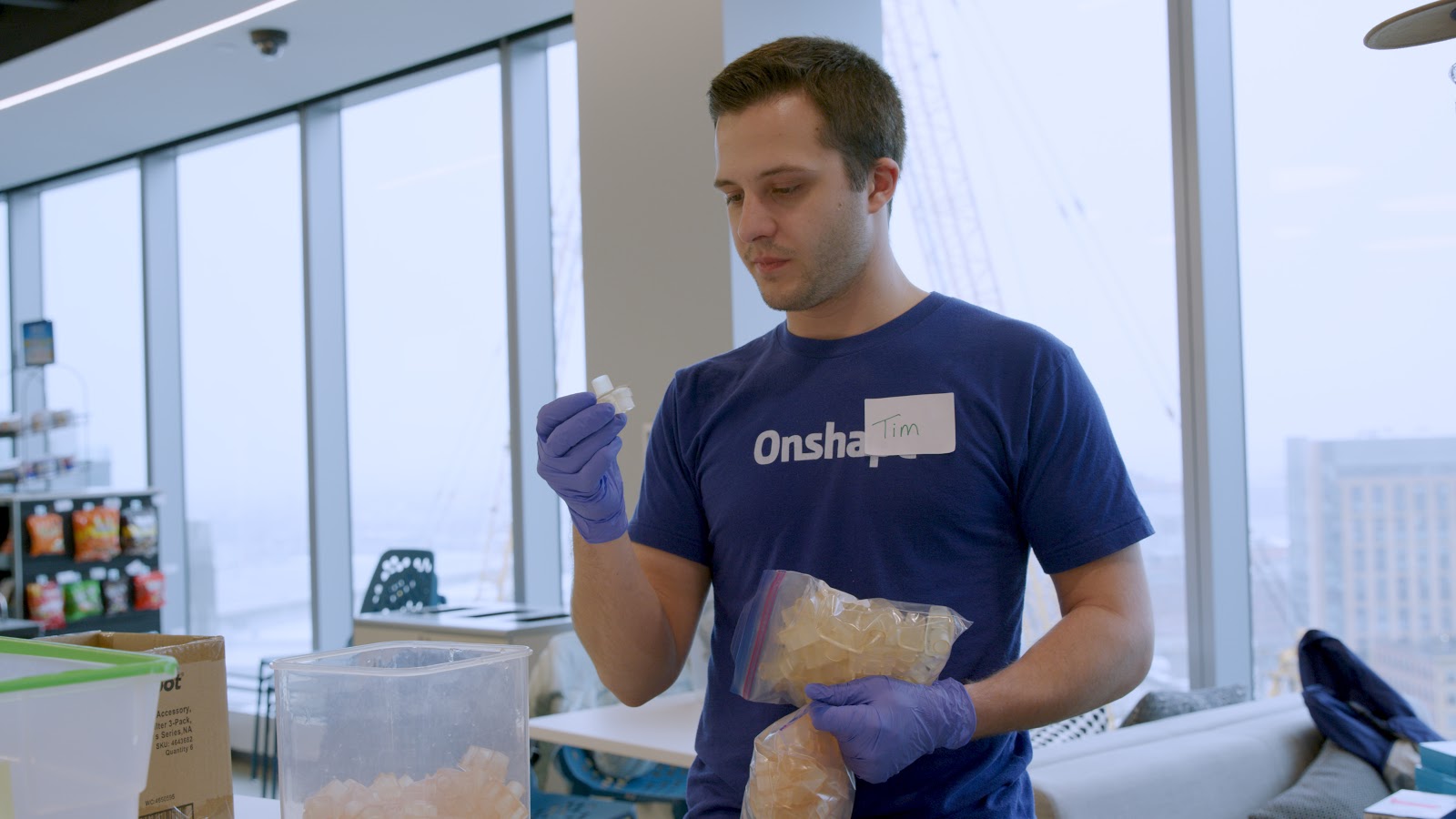 Sara Remsen, VP of Product Experience for Vuforia at PTC, is spending her evenings writing online instructions and documentation for clinicians using the MasksOn gear. She notes that when witnessing the whirlwind of activity from her fellow volunteers, it’s hard to imagine that the organization is only a few weeks old.

“The thing that's been most amazing to me is the amount of progress that a dedicated, highly-motivated, highly-talented group of people can make in only a span of days,” she says. “It's been insane. Thinking about the scale of what's being accomplished is amazing.”

“We’re basically a startup where every day we are progressing by three months,” adds Onshape’s Sauln. “We’re not doctors. We’re not in hospitals. We can’t do as much as they are, but at least we can support them because they’re the ones on the frontlines.”

The project is first scaling to meet the demand in Boston, with plans to expand to New York, San Francisco, Seattle, Dallas-Fort Worth and other cities. MasksOn says it costs $55 to build and ship each mask. Their goal of producing over 50,000 reusable masks would provide at least 1 million “Clinician Protected Days” during the coronavirus crisis.

Fundraising has been successful so far, already raising $1.7 Million of their $2.75 million goal.

According to an April 6 GoFundMe update from MasksOn’s Christian Lewis, here is some of the progress made in the past few days:

(If you would like to donate to MasksOn, visit their GoFundMe campaign at https://www.gofundme.com/f/MasksOn. If you are a company or individual interested in volunteering, please fill out their contact form at https://maskson.typeform.com/to/OgfCse.)