BETA Technologies is a leading developer of electric vertical take‑off and landing (eVTOL) aircraft for the cargo and logistics market. When the company was launched in 2017, the engineering team was seeking a cloud-native product development platform where everyone would be working with one single source of truth without the strict protocols and workflow restrictions of traditional file-based Product Data Management systems.

“Onshape was critical to us because it meant we weren’t going to lose anything. Everybody could easily work on the same designs, they could find everything, and you didn't have to have a bunch of rules about where you save stuff, when it was saved last, or who has checked it out.”

Nearly everyone on the product development team at BETA Technologies, a leading developer of electric vertical take-off and landing (eVTOL) aircraft, has one credential they don’t offer in engineering school. It’s a pilot’s license – and if you don’t know how to fly when you join the team, you can start taking free lessons as a company benefit.

“Our CEO believes that engineers who are pilots can do a better job designing an aircraft than engineers who are not,” says Lino Verna, Lead Engineer at BETA Technologies. “We have a fleet of over a dozen aircraft, along with our own staff of (flight) trainers and mechanics. These aircraft are conventional like Cessna 172 trainers. But everybody gets to learn how to fly.”

Based in South Burlington, Vermont, the company is the developer of the ALIA-250c, which takes off and lands vertically like a helicopter and transitions to long-range flight like a plane. From the top view, the sleek eVTOL aircraft resembles a seabird mounted with a roof rack and propellers. The wing design is inspired by the Arctic Tern, a species that flies further than any other bird, migrating between the Arctic Circle and Antarctica every year (the current range of the ALIA is 250 nautical miles between battery charges).

“Beauty is very subjective, but fundamentally, pilots are much more interested in flying a beautiful,and simple aircraft,” says Verna. 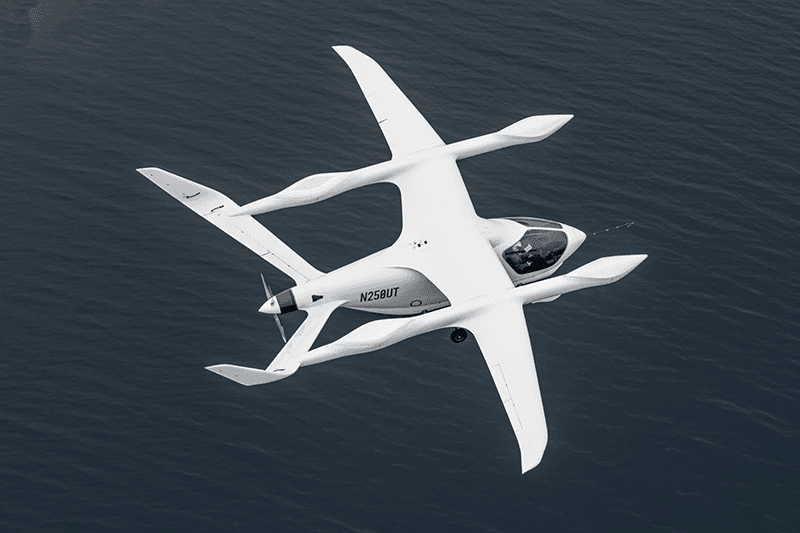 BETA’s engineering team designed the wings of its ALIA aircraft to resemble the wings of a migrating seabird.

The environmental benefits of eVTOL aircraft are similar to electric vehicles: zero emissions, no combustion engine, no burning of fossil fuels. Batteries will also primarily be charged at solar-powered stations. As electric planes have far fewer parts than conventional ones, the economic benefits of ownership include lower maintenance and operating costs. While there is much buzz in the industry around the future urban transportation market (such as air taxis or limos), BETA’s immediate focus is on cargo delivery.

“We’ve seen huge traction in the cargo market, with customers like UPS, the U.S. Air Force and United Therapeutics,” Verna says. “Our aircraft was designed with cargo and logistics missions in mind and the specs seem to really resonate for those in the market.”

BETA’s goal is to start manufacturing certified aircraft by the end of 2024. 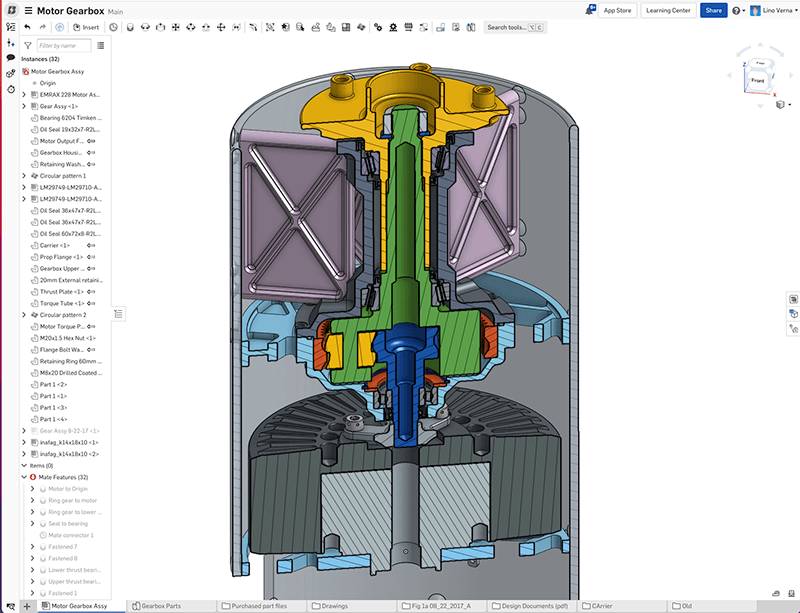 The BETA Technologies product development team credits cloud-native Onshape for helping them iterate quickly. Pictured here is the gearbox CAD model for one of the company’s early model aircraft.

BETA Technologies was an early adopter of Onshape in 2017 (about a year after Onshape’s commercial release). When Verna started work on the ALIA, the company only had four employees. Today, BETA has more than 250 employees.

After spending more than two decades using legacy file-based CAD systems at his previous jobs, Verna says he was seeking to start with his new engineering team all working with a single source of truth in the cloud.

“In the beginning, we were a tiny scrappy company and we had to prove that we knew what we’re doing,” he recalls. “That meant iterating quickly, and the cloud-native nature of Onshape was critical to us because it meant we weren’t going to lose anything. Everybody could easily work on the same designs, they could find everything, and you didn't have to have a bunch of rules about where you save stuff, when it was saved last, or who has checked it out.”

With Onshape’s real-time data management, multiple engineers can simultaneously work on the same CAD model without fear of overwriting each other’s work. Whenever one team member makes a change, everyone else on the team can instantly see it. A comprehensive Edit History tracks who made which changes and when, allowing the team to quickly revert to any prior state of the design if desired.

“Onshape’s user experience is more fluid, and we’re able to work faster,” Verna adds. “It’s tough to quantify exactly how much faster, but as you use it more, you start to realize, ‘Wow. I've been using Onshape the last three weeks and it hasn't crashed,’ or, ‘I haven't saved and I didn't lose three hours of work,’ and “Oh, I'm working with somebody else and we can find the same version.’”

With some BETA engineers using Macs and others preferring Linux, the team also values the fact that Onshape runs on multiple operating systems and on any computer, tablet or phone (iOS or Android). Onshape’s cloud-native platform also facilitates remote collaboration and distributed teams. While most of the BETA product development team is based in Vermont, they are spread out between four buildings, and Verna is based in North Carolina.

As a Software-as-a-Service (SaaS) platform, Onshape is able to release automatic upgrades in the cloud every three weeks, delivering new features, improvements and functionality. The releases don’t require any downloads or installations, eliminating the downtime typically required with on-premise software upgrades. The engineering team can keep on working uninterrupted without needing to involve the company’s IT department.

“I really like how the updates often have a surprise in there for you that's something you've been looking for,” Verna says. “So many times I’ve thought, "Oh, I've been really waiting for something like this and now it's available!’"

“And Onshape always works,” he adds. “In my experience, I’ve had trouble with other CAD tools that make an update and then things don't work like they should or we can't use it while it's updating. Plus, the frequency of Onshape’s releases is significant as most other CAD packages release new improvements only once a year.”

Success on the Horizon 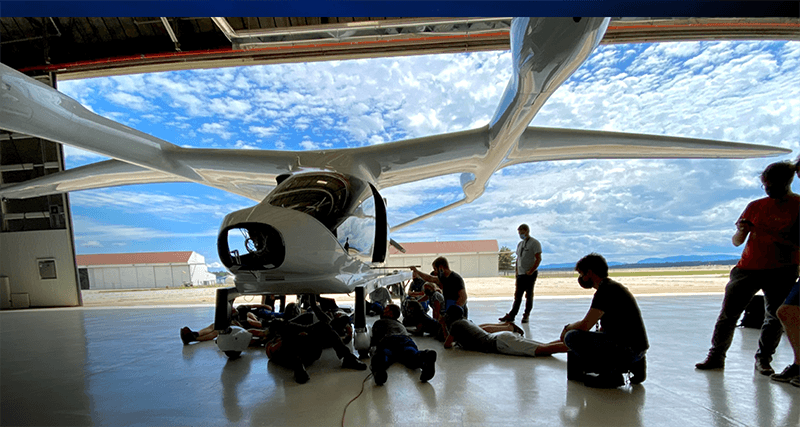 BETA Technologies, which is designing its eVTOL aircraft with PTC’s Onshape product development platform, expects to be manufacturing certified aircraft for the cargo industry by the end of 2024.

Moving forward, a top priority of BETA Technologies’ is obtaining Federal Aviation Administration certification for its eVTOL aircraft. The company’s goal is to be manufacturing the ALIA within the next three years. UPS is the first cargo customer for the ALIA, ordering 10 aircraft with an option for up to 150, while Blade Urban Air Mobility is its first passenger service client, ordering up to 20 aircraft.

Verna considers his current role to be “the hardest and most fun I've had by a very large margin.”

“The energy here is really contagious. We're all thrilled to be here. We're all kind of a family and love what we're doing.” he says. “The CEO structured the company such that it encourages everyone to be innovative. BETA has attracted a lot of brilliant people and there’s just a snowball effect.”