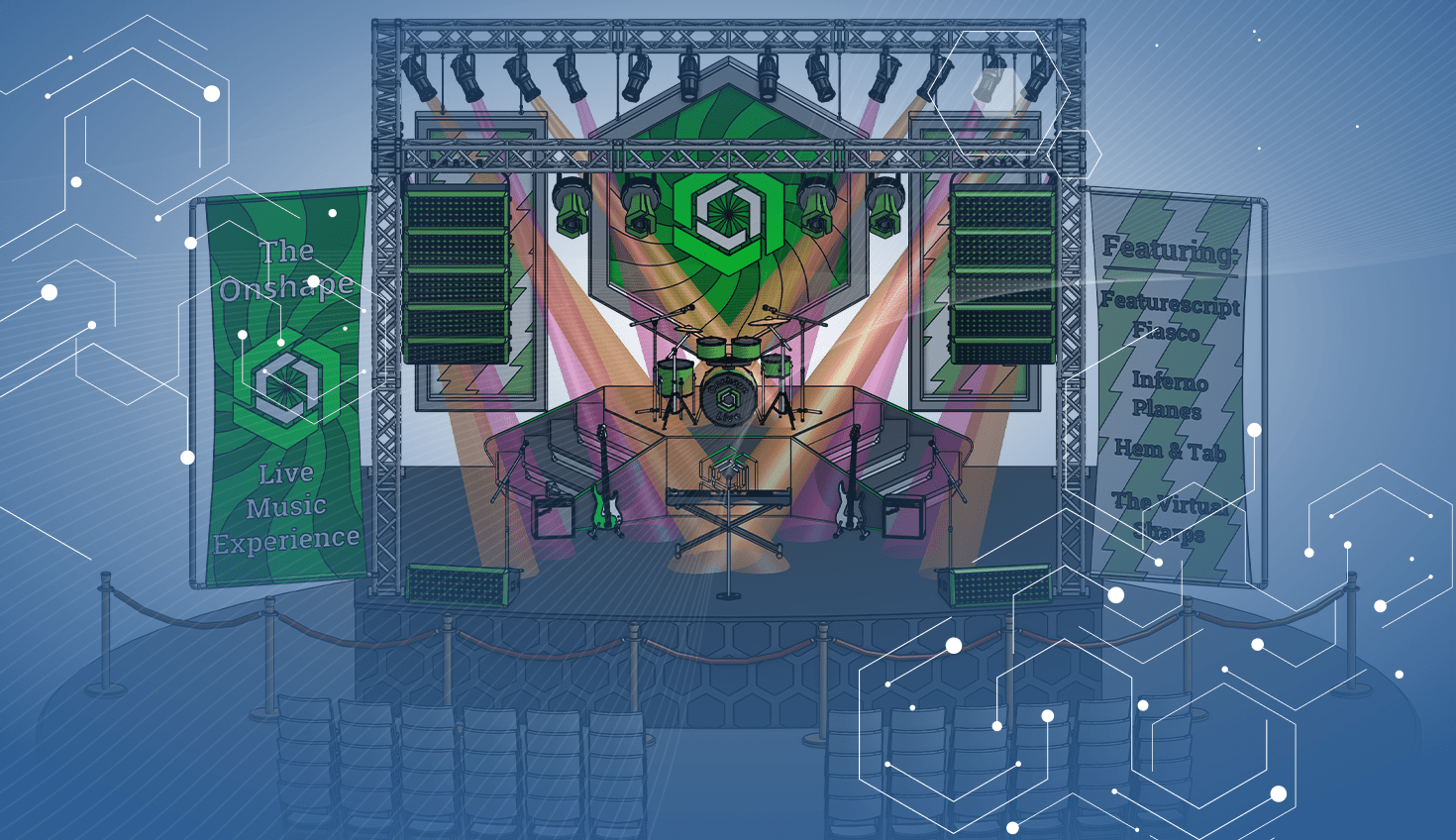 Customizable beer taps, the perfect backyard for a summer of fun, a Polaroid camera to capture the memories, and an outdoor concert venue with a solid lineup.

These were some of the more creative 2021 entries in our annual Internal Onshape Design Competition that wrapped up this month. All year long, across every department, Onshapers strive to deliver better product development tools to help make your job easier. What some on the outside may not realize is how much Onshapers enjoy using Onshape, too!

For this year’s competition, Onshapers were invited to submit CAD designs in three categories:

Let’s take a look at the some of the more creative entries in the following categories:

Zachary Sherman, an UX Support intern, worked on three different decked-out part designs. He recreated some Mitutoyo calipers, a Yaesu FT-60R ham radio and a GoPro HERO8 Black. And no details were left out.

“I find that the more details I add, the more fun the models actually turn out and they feel more real,” he told his colleagues at the awards presentation. 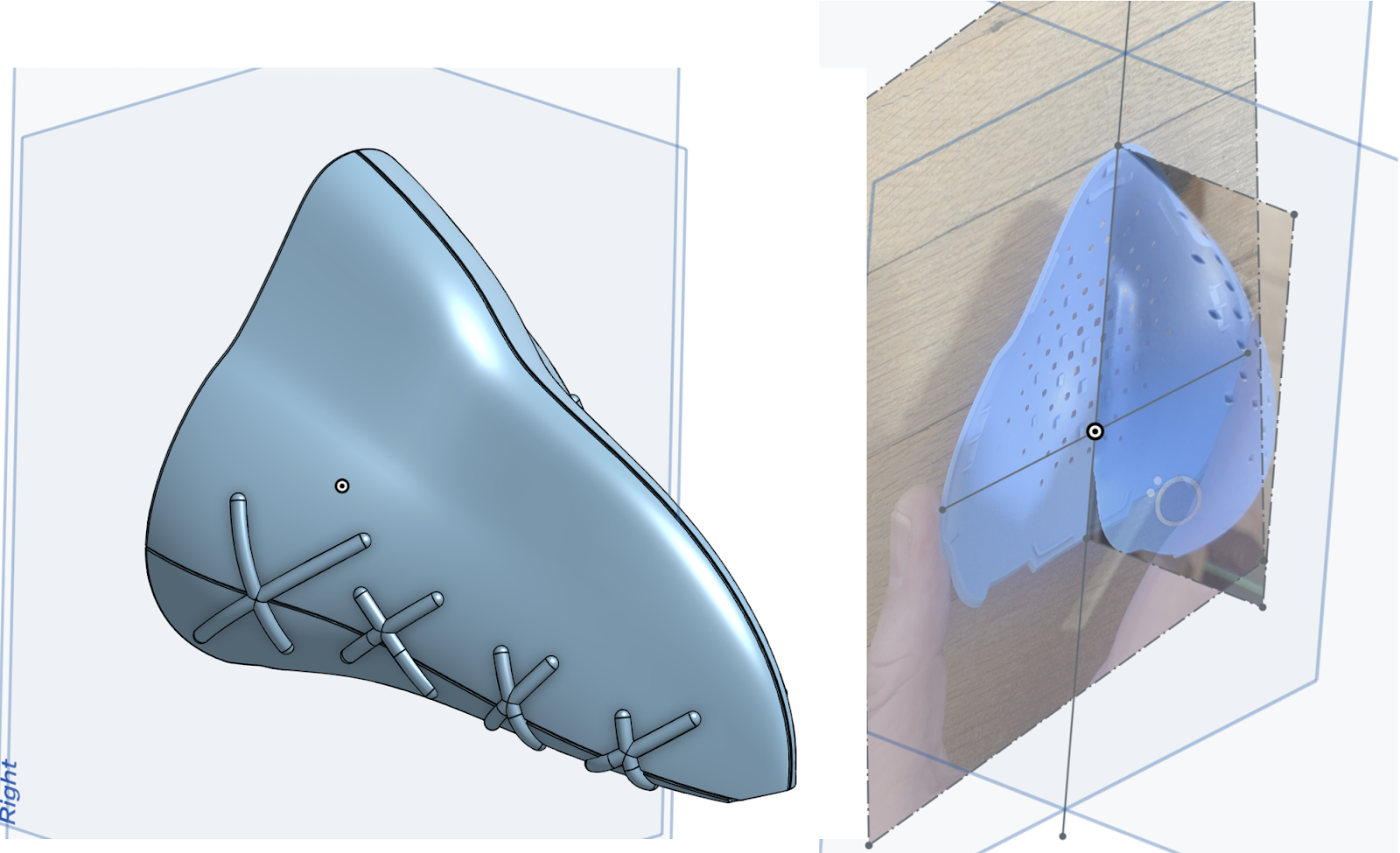 The removable faceplate layer sparked Newth’s idea for an interesting mask design — the plague mask. To work on this design, he had to use Onshape tools for surfacing and rotoscoping.

“I’m primarily a mechanism designer,” he said. “So this was a chance for me to explore Onshape’s surfacing tools using a lot of the tutorials the [training team] have come up with.” 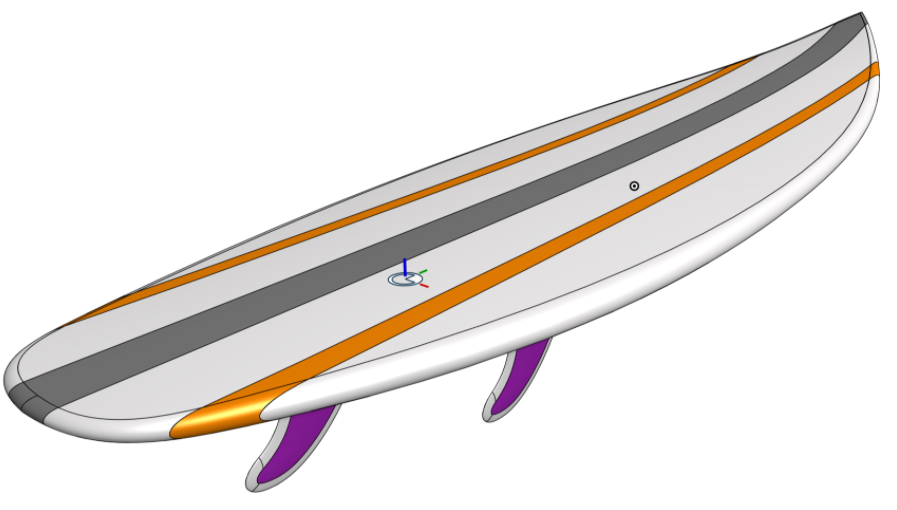 For this competition, Senior Technical Services Engineer Nacho Martos wanted to build up his surfacing skills and designed a surfboard. Actually, he designed several surfboards with different looks and number of fins, placing them in an Onshape Assembly for that “shop” feel.

Martos said it was super fun to work on this entry, and used Surfacing methodologies to build the geometries inside of the board.

“I chose to design a surfboard as the sport has been an important part of my life since I was 16,” he said. “My hope is to make it out to Hawaii next year and get a chance to test out some of my designs!” 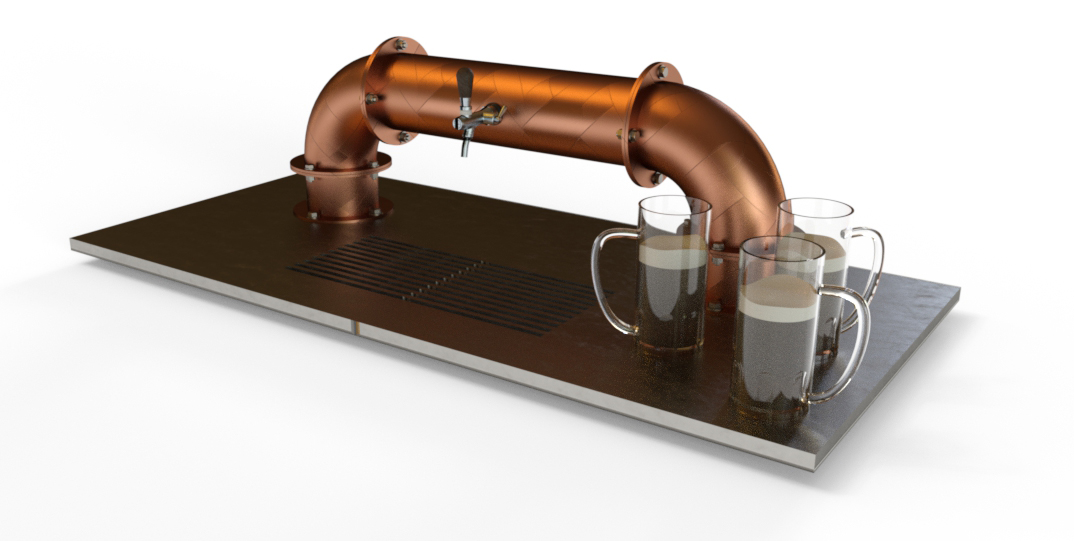 He said he wanted to challenge what Onshape Configurations can do, allowing him to quickly and easily change the design for different bar setups.

“I did use some really cool variable combinations, things like equations are used all over the place to actually drive the pipe shape and actually change the width of the pipes. As you get more taps in there, you’re going to need more plumbing.”

Those wise words (and design) earned Martos the “Judges’ Choice” for Assembly Design. 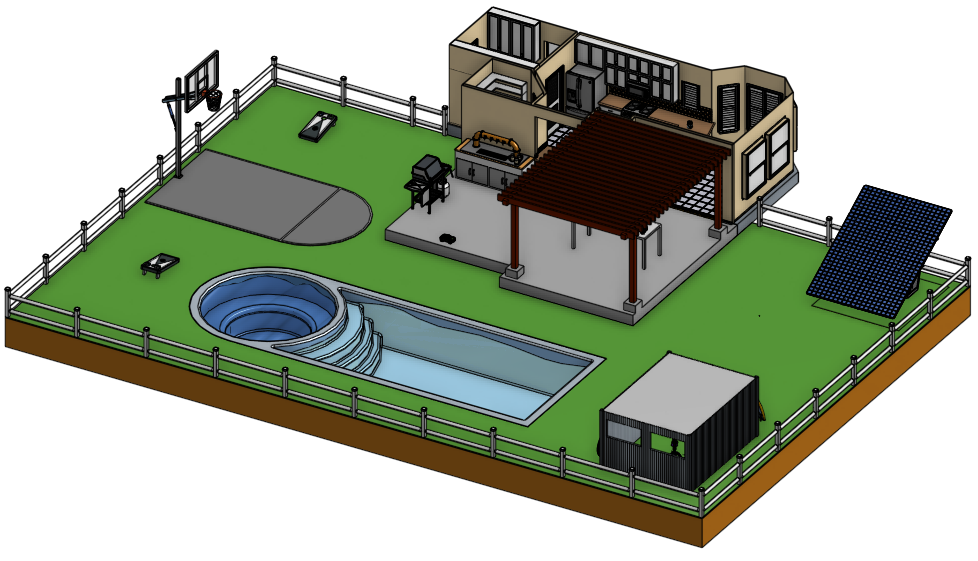 Move over Hot Girl Summer, it’s time for the Summer of Onshape. The Pre-Sales Technical Services team took Martos’ beer tap and expanded the fun with their own perfect summer getaway.

“Every great patio has got to have a little bit of fun elements to it,” including an RC car, a basketball court, one of Martos’ surfboards to catch some waves, a beer station, and a grill that Delano designed. “And now we’re ready to party this summer!” 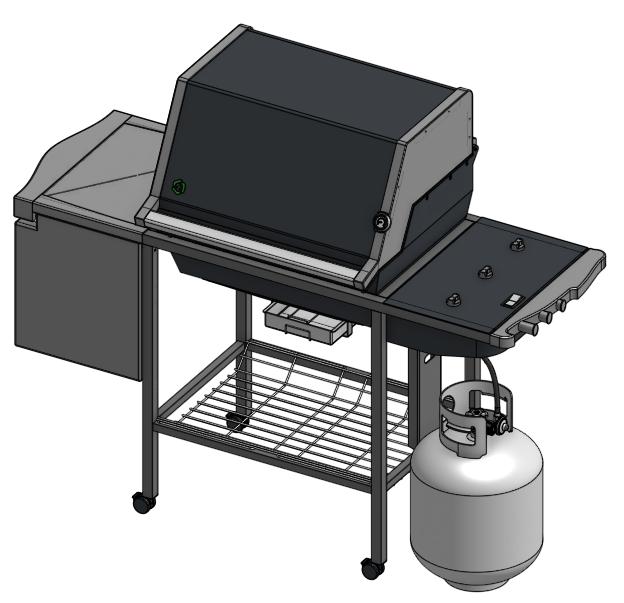 “I decided to design this grill Assembly because I was looking out my window all summer at my grill in my backyard and I was like, I’m gonna do that,” Delano said.

He used Routing features for the spark plug wire as well as the Hose Routing feature, and plans to add more configurations to show the power of Onshape.

Sticking to the recreation theme, the Onshape Education team created the Onshape Live Music Experience. Their assembly  goes into great detail, from the changing strobe lights to the speaker design.

“One of the best things about this is that you can just keep zooming in” to discover more details, said Domencio DiMare, an Onshape Community Engagement Specialist. Notable details in the concert venue design include the Onshape logo on the speakers and a punny musical lineup of Onshape-themed bands: “FeatureScript Fiasco,” “Inferno Planes,” “Hem & Tab,” and “The Virtual Sharps.”

“Unfortunately, there is no cowbell,” DiMare joked. “We were working on it and ran out of time.”

But even without the cowbell, Onshape Live Music Experience won “People’s Choice” in the Assembly category, and was also selected as the overall winner.

Joshua Newth, who created the customizable mask layer in his  Part Design entry, also created an air-powered motor for the Assembly Design category. He said the motor was inspired by Air Hogs.

All of the parts are designed to be molded, he added, including a flip that helps speed up production. 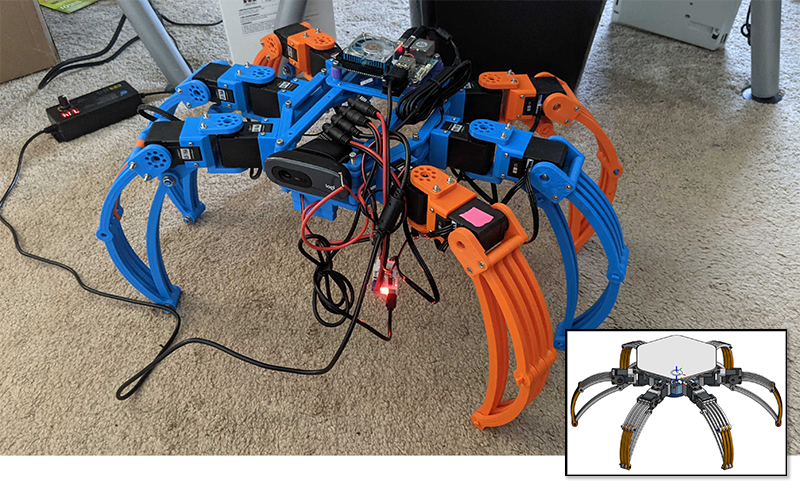 “I designed Harriet the Hexapod originally as a mapping solution,” Rivadeneira said. “I wanted a robot that could navigate a house and send me a floor plan. Staircases proved to be an issue for rolling drones and flying drones were basically too expensive for the features I was after. After actually designing and assembling it, I began extending the functionality.”

To accomplish this, he used Revolute Mate limits and inclusion of subassemblies that would provide the information needed to see if Harriet’s legs were long enough to climb stairs. 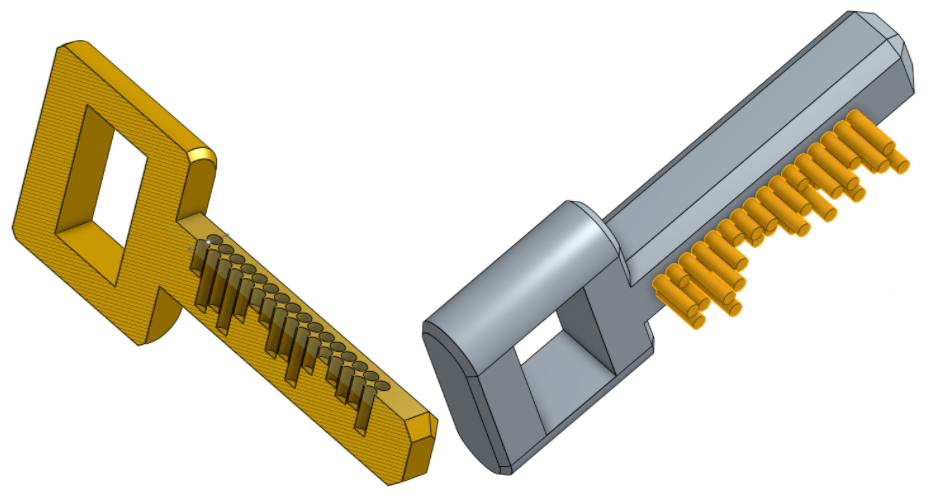 “Key making requires a lot of specialized proprietary tools and I wanted to explore the idea of generalizing that concept and making it more accessible to all kinds of manufacturing,” Mycynek said. “One application I think this could be used for is in areas where things like Wi-Fi and Bluetooth with two-factor authentication are not practical, maybe in outer space, high-radiation areas, highly secure areas where you need something a little bit simpler to represent digital values.” 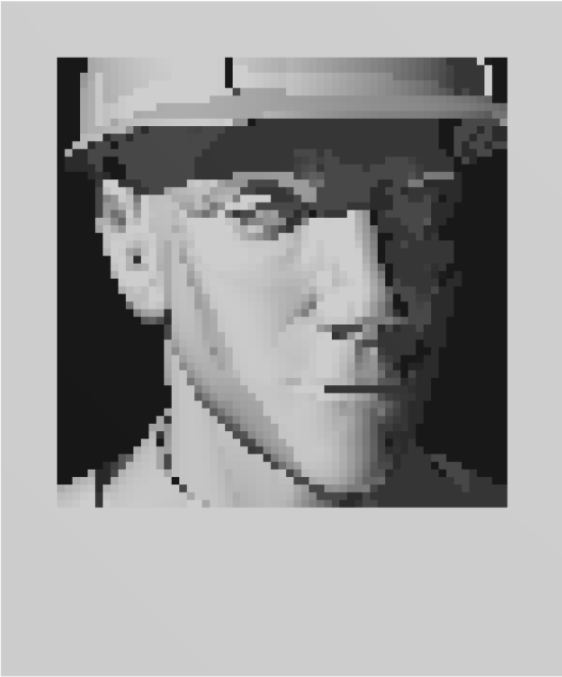 Tim Rice, an Product Definition Engineer, wanted to play with light and created a Polaroid custom feature that allows you to import a focal length, number of pixels, shadow, and camera origin.

“The idea came when I inherited and unearthed this film camera from my grandfather,” Rice said. “And it got me thinking about how light interacts with the real world. And I thought, well we have a digital side of that in Onshape, so can I reproduce that in FeatureScript?”

The end result? A photo within Onshape, as well as taking “People’s Choice” in the FeatureScript category.

Newth’s FeatureScript entry was inspired by the board game Gloomhaven, which challenges you to “vanquish monsters with strategic cardplay.”

“I was playing a lot of board games and I got really obsessed with this one,” he said. “And you have all these little figurines that need to be able to indicate hit points with numbers around the dial.”

This led him to think of a solution to align text with features in Onshape, which can be a “laborious” task.

Neil Cooke, Director of Technical Services, EMEA, worked on the Rib Network above and won “Judges’ Choice” in the FeatureScript category. 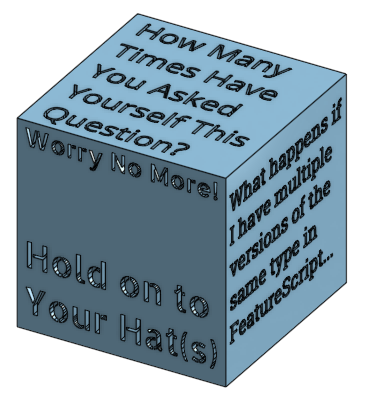 Wrapping up this category, Ari Porad, Onshape Architecture/FeatureScript intern, aptly named his entry, So You Want to Talk About Bug-For-Bug Compatibility?

His entry helps answer the question: “What happens if I have multiple versions of the same type in FeatureScript, but each version has different overloads? Which version gets used?”

As you can see, Onshapers used a variety of Onshape tools to create some interesting and practical designs in a relatively short period of time.