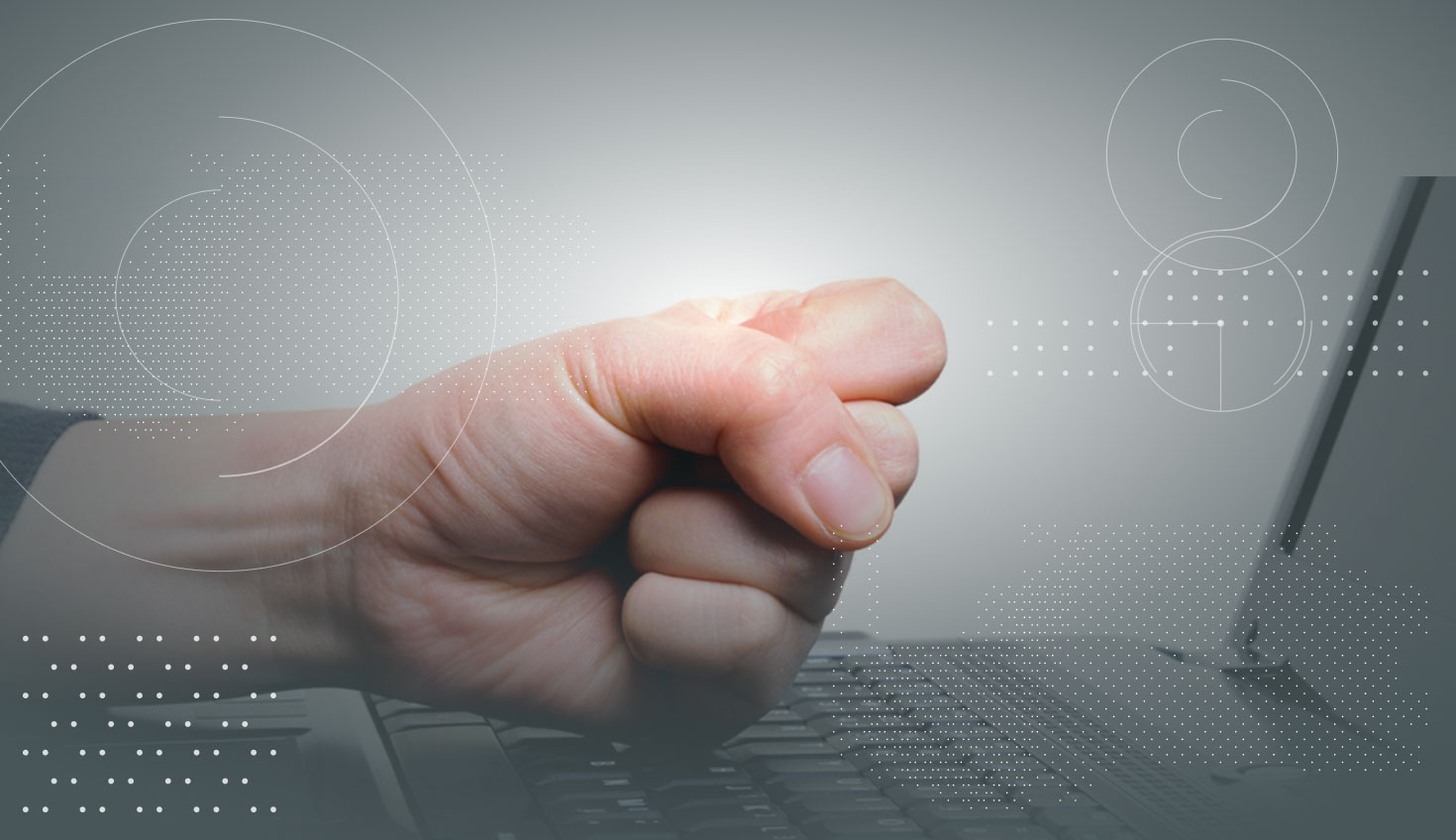 In a recent CAD satisfaction survey of 230 design professionals, Engineering.com asked a very provocative question: What do you hate most about your CAD software?

The research, sponsored by SOLIDWORKS®, revealed these four things that engineers and designers despise the most (in order of importance):

Onshape users were not included in the Engineering.com survey. SOLIDWORKS compared its favorability ratings with Siemens Solid Edge®, PTC Creo®, Siemens NX® and AutoCAD®. While SOLIDWORKS fares well in its own study on reasons numbers 2-4, it scores second to last in satisfaction on cost (lagging behind only AutoCAD).

The widespread dissatisfaction with overpriced traditional CAD systems comes as no surprise to us. Because my desk is near the Onshape Sales team, I frequently overhear conversations with engineers complaining about the upfront costs of additional CAD seats, along with the price of annual maintenance and hardware to support them. The budgetary strain can be summed up in the chart below: 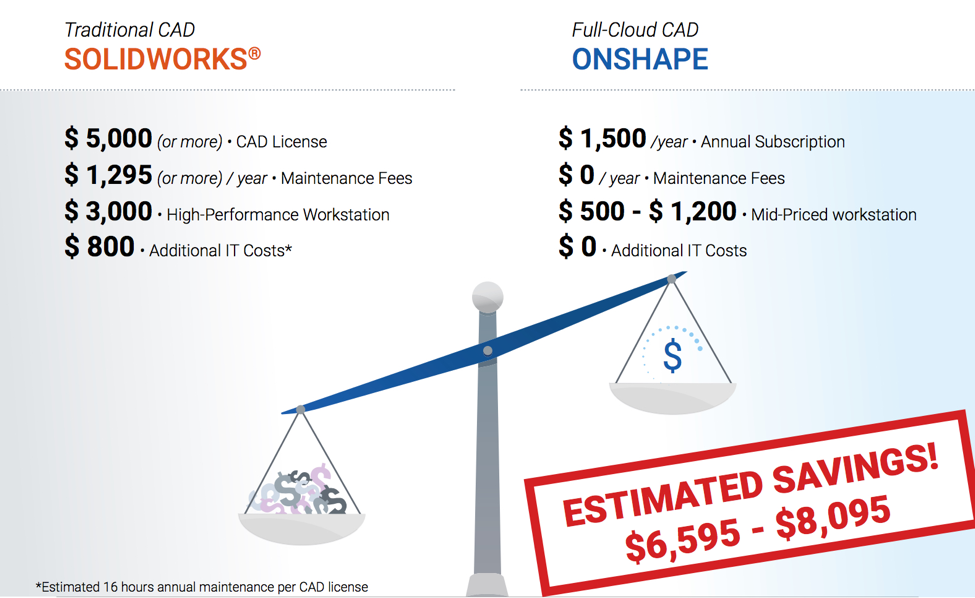 In a recent Onshape-conducted survey of 1,001 TraceParts users (engineers who are not our customers), 60% of respondents said they were not satisfied with the price of their CAD system compared to its perceived value. In the same survey, we asked engineers to share what they liked the least about their current primary CAD system. Here are their most common answers:

WHAT ENGINEERS REALLY DON’T LIKE ABOUT THEIR CAD SYSTEM

Take a close look at the word cloud above and you’ll notice a lot of overlap with the Engineering.com frustration list. When we categorized the responses, these were the biggest complaints (in order of frequency):

This was an open-ended question, so it revealed what was on the forefront of CAD users’ minds like the results of a Rorschach inkblot test. It’s natural that engineers would be most irate about losing work or staring at the “beach ball of death,” because those things happen more often than paying for CAD, which is usually once a year.

Interestingly, when the Onshape survey gave participants a list of issues and asked them to choose which ones were big problems, the high cost of CAD shot right to the top. Here are the biggest complaints from traditional CAD users when they had more time to ponder them on a fixed menu (in order of frequency):

From this list, we can extrapolate that there are more engineers who feel they are being overcharged for CAD than there are engineers upset over a missing feature or two. Tech Support, the second most common complaint, is an issue that's always on Onshape's radar – primarily because of our team's personal experience having their requests ignored over the years by old-school CAD vendors.

In a recent customer satisfaction survey we sent to 440 Onshape users and 928 traditional CAD users, Onshape Tech Support outshined the competition 87% to 64%. In terms of offering stellar customer service, a further breakdown of these numbers is telling:

If you want to see how responsive Onshape Support is yourself, you can use the Feedback tool inside Onshape (accessible as a hot key or a menu command). You can track the status of your job tickets at anytime by clicking on "View support tickets" command in the pulldown menu under your username. Many customers tell us how shocked they are to have their issues resolved in a matter of hours. (Watch this video for more details.)

How Onshape Eliminates the Traditional Pains of CAD

Engineers hold their CAD systems to very high standards and their needs are always changing. Onshape was built from scratch to address the most common pains of traditional CAD, and its full-cloud platform allows it to automatically update with new enhancements and features every few weeks. Meanwhile, your installed file-based CAD systems just, well, sit there until the next service pack or annual release (which many engineers decline to install until the bugs are worked out).

Let’s revisit the four biggest complaints revealed in the Engineering.com/SOLIDWORKS survey and see how Onshape handles these old and lingering problems:

“The cost of CAD ownership is too high.”

At $125/month (billed annually), Onshape’s affordability allows startups to devote precious resources to other pressing needs and companies of all sizes to purchase 3D CAD for every employee who needs it. Paul Achard, co-founder of Taiga Motors, a Canadian company developing high-performance electric snowmobiles, estimates his six Onshape subscriptions saved him $25,000 - $30,000 this year if you include the additional hardware he’d need to buy to run traditional CAD.

“For us, it's a huge deal,” he says. “I’m not exaggerating when we say we count every dollar we spend, because every dollar we save is a dollar we don't have to raise. One of the keys to running a successful startup is being a penny pincher, maybe not to extremes, but you definitely have to challenge every purchasing decision you make.”

“It is too difficult to import/export files.”

Onshape was designed for painless data exchange between CAD systems. It’s extremely rare today that a product is designed and manufactured with only one CAD system. Onshape can import and export a wide variety of 3D file formats, meaning you don’t need to know upfront which CAD system or software version your business partner is using. Say goodbye to incompatibility issues!

For a complete list of supported formats for importing and exporting files (not only CAD files), visit Onshape’s product documentation.

“It is too difficult to use, including too much time to learn and teach others.”

Founded by key members of the original SOLIDWORKS team, Onshape is intuitive and easy to learn for anyone with a parametric CAD background. Many engineers report being able to learn Onshape in a day or less using resources in the Onshape Learning Center. Others prefer a quick live training course, such as Onshape Bootcamp, to get a jump start. Clive Smith, CEO of Thinklabs, creator of the first digital stethoscope, says he taught himself Onshape in a few hours.

"I’m an experienced CAD user and was astounded by how quickly I learned Onshape," Smith says. "I watched about six videos, each two or three minutes long, and then I just practiced on a random drawing to see what I could do.”

“It is tough to find employees with experience using our CAD system.”

Smith’s positive experience described above convinced him he could quickly train his entire design and manufacturing team to use Onshape as well, regardless of their previous CAD system.

Whether your biggest frustration is reliability, usability, price, functionality or something else completely off these surveys’ radar, Onshape’s modern database-driven architecture frees you from the headaches of traditional file-based CAD.

But don’t take our word for it. At Capterra, the business software review site, you can read more than 200 candid testimonials about Onshape and how it differs from users’ previous CAD systems. If you’re already using Onshape, we’d love to see you add your voice to the mix here!