Q: After spending much of their work week designing CAD models in Onshape, what do engineers do for fun?

Teams and individual contestants from 20 countries entered the first-ever Onshape Design Competition this month, focusing on a quirky remote work challenge: “After finding a box of ‘spare parts’ at the office, you decide to take them home and use them to reimagine your home office setup.”

Using some ready-made components and other parts freshly created in Onshape, the task was to build a home office environment that makes remote work easier, more efficient, and/or more enjoyable. A box of spare parts contained everything contestants needed to create a robotic arm, minus the end effector, and it was up to individuals and teams to determine what function the robot would perform as part of their larger home office system. 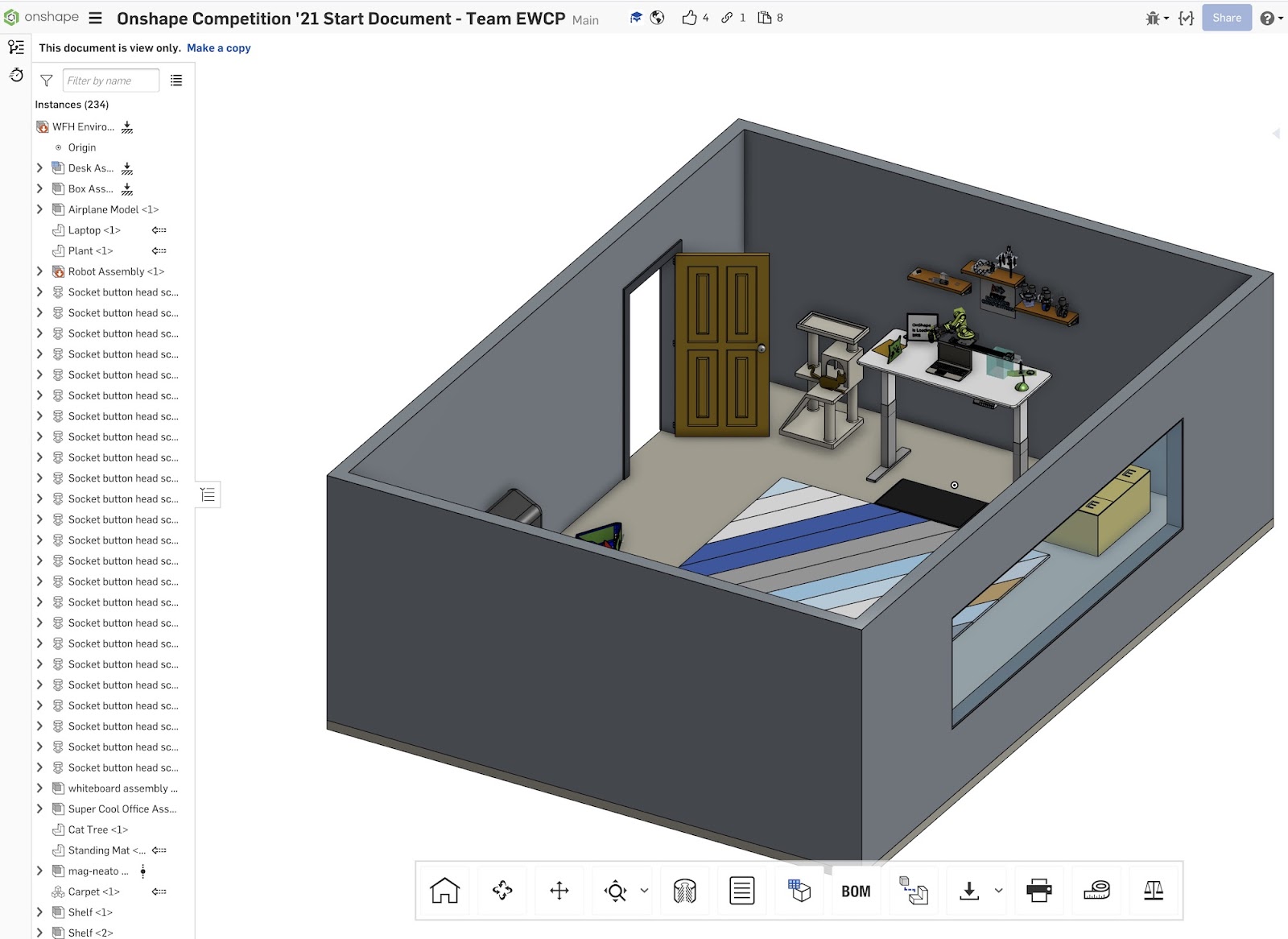 How would you design the ultimate home office to make remote work easier, more efficient or more fun? Onshape Design Competition contestants took on the challenge.

Competition participants were given a three-hour time limit to accomplish the following tasks:

In total, 200 CAD users – including a mix of professional engineers, educators, students and makers – participated in the competition and brought more than 20,000 hours of combined Onshape experience to the table. There were 48 team submissions (teams could include up to 5 people) and 32 individual entries. 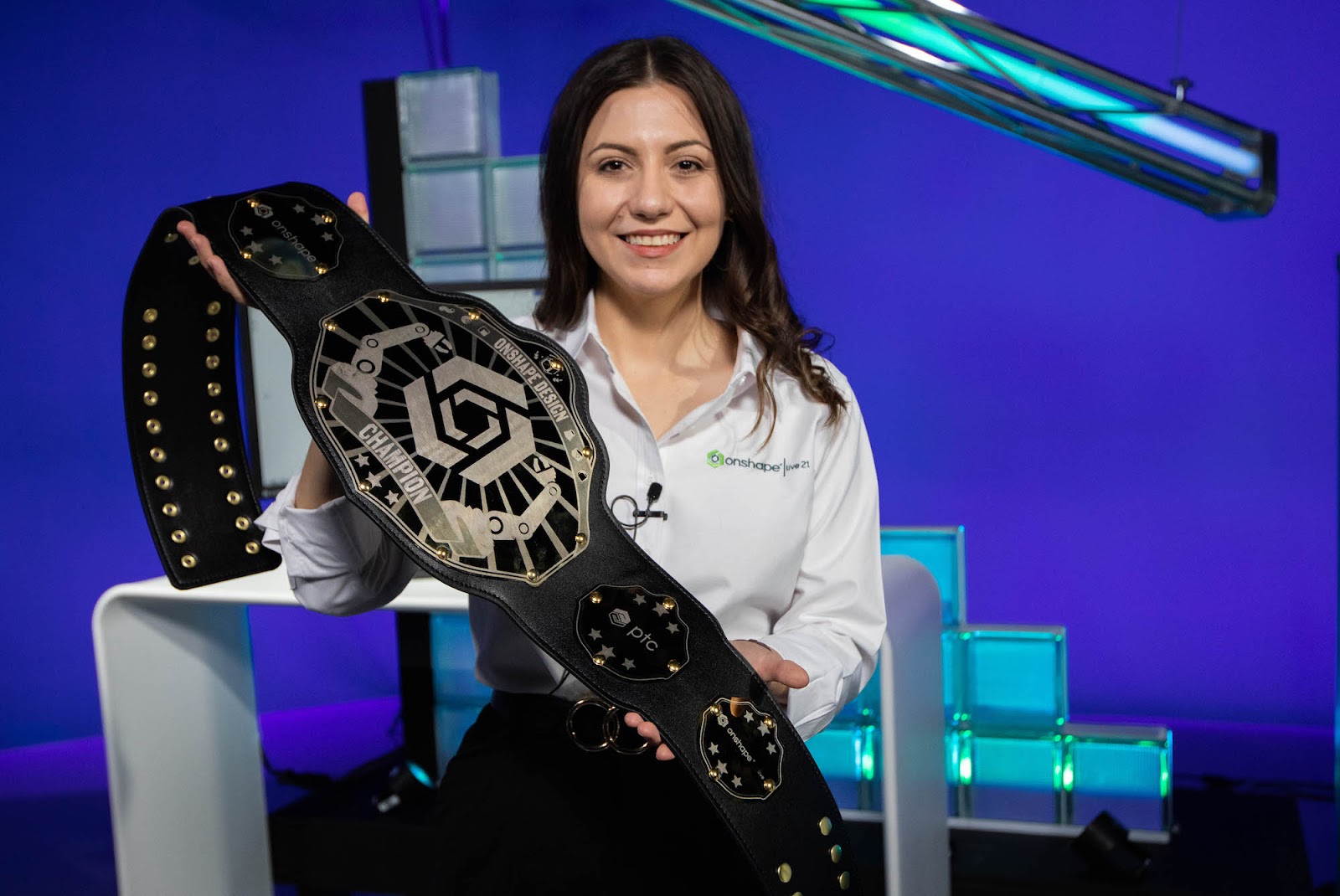 PTC’s Eugenia Camacho announced the winners of the Onshape Design Competition at the first-ever Onshape Live conference in March 2021. Members of the first-place team were awarded a customized ODC championship belt.

Contestants submitted a wide variety of design concepts, ranging from a plant-watering system to a cold beverage service system. Judges from the Onshape team narrowed the submissions down to three winning designs, scoring entries on criteria such as the complexity of parts and assemblies, the kinematics of the robot assembly, and the uniqueness of their design concept and functionality.

The winners were announced at the Onshape Live ‘21 conference on March 11, 2021. Let’s take the opportunity to celebrate their ingenuity and design skills here as well. What is especially exciting is that most of these team members had never collaborated together on CAD projects before. 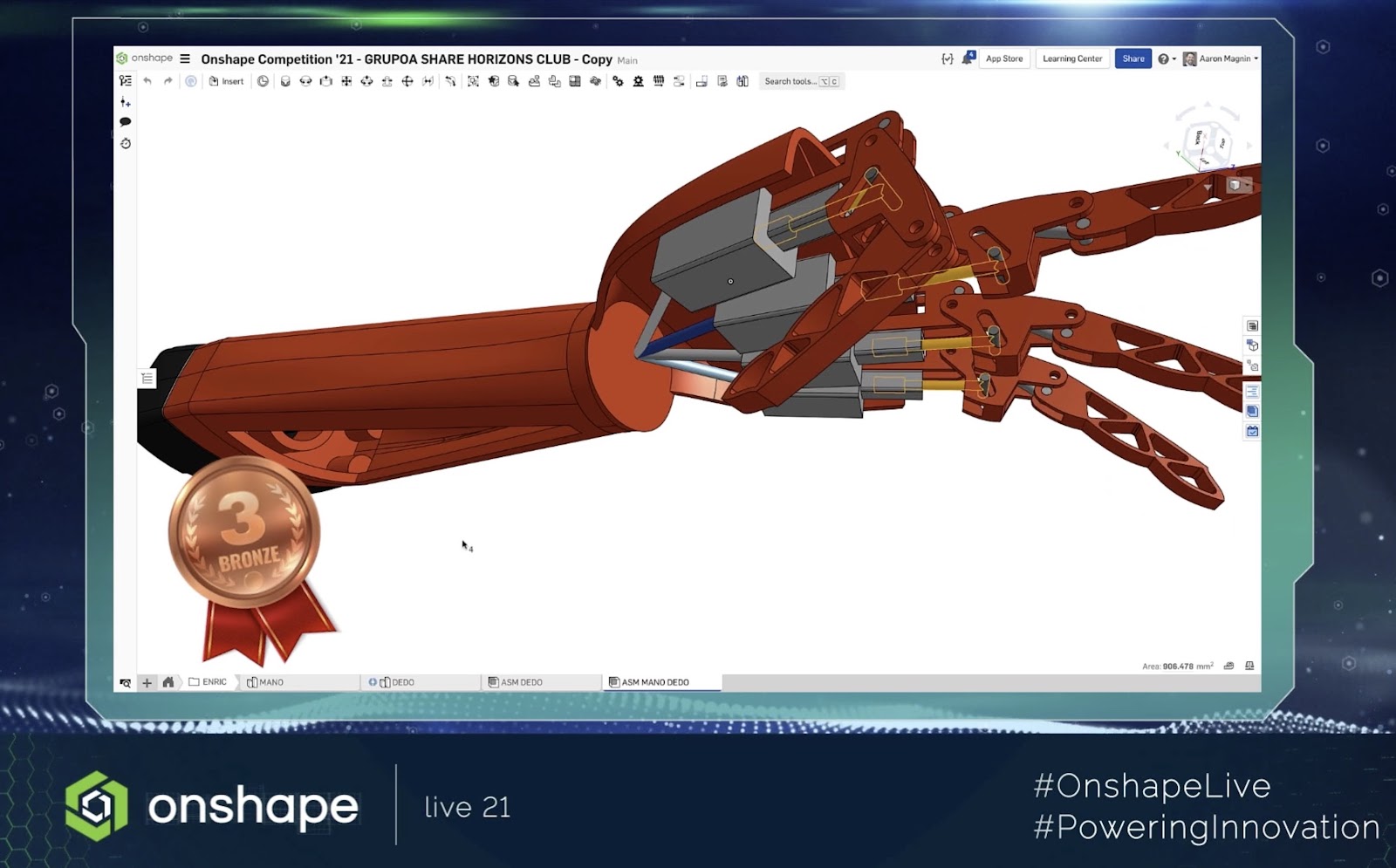 Based in Spain, Share Horizons is a virtual international makers’ club that runs weekly tutorials on how to use software and hardware for additive manufacturing and product design. The club started out as a YouTube channel and attracts Spanish-speaking technology enthusiasts from around the world. For the Onshape Design Competition, team members participated from Spain, Argentina and Colombia.

“We were very nervous waiting for the winners to be announced at Onshape Live,” says Share Horizons founder Enric Palou. “Because of the six-hour time difference, some of us were waiting until 11:30 at night. When we realized we had won third place, we were all screaming at our computers!”

“To be honest, we usually design by ourselves and have never used Onshape’s collaboration features before. For this competition, we had five of us designing in the same Onshape Document at the same time with different folders. We learned a lot during the two weeks preparing for this and had a lot of fun,” he adds.

For their design, Share Horizons chose to create a robotic hand as the end effector for their robotic arm. Their overall design was intended to alleviate some of the emotional stress that comes from working from home, since as they put it, “Sometimes we need a pat on the back in hard times, sometimes we need a handshake when we do it right, and if we get distracted looking at our phones, we may need a slap on the cheek.”

The Onshape judges cited a few things that stood out in the Share Horizons design. First, the team was able to design a mannequin, a chair, and the office backdrop all in the competition Document during the three-hour period. They were one of the only groups that took the time to add a cover to the linear actuator system. But the most impressive part of this design was the complexity of their robotic hand. The fingers consisted of a four-bar linkage and actuator to create a motion that mimics how human fingers close around an object – and for the fingertips, they used the “Lighten” custom feature. All impressive features in such a short period of time. 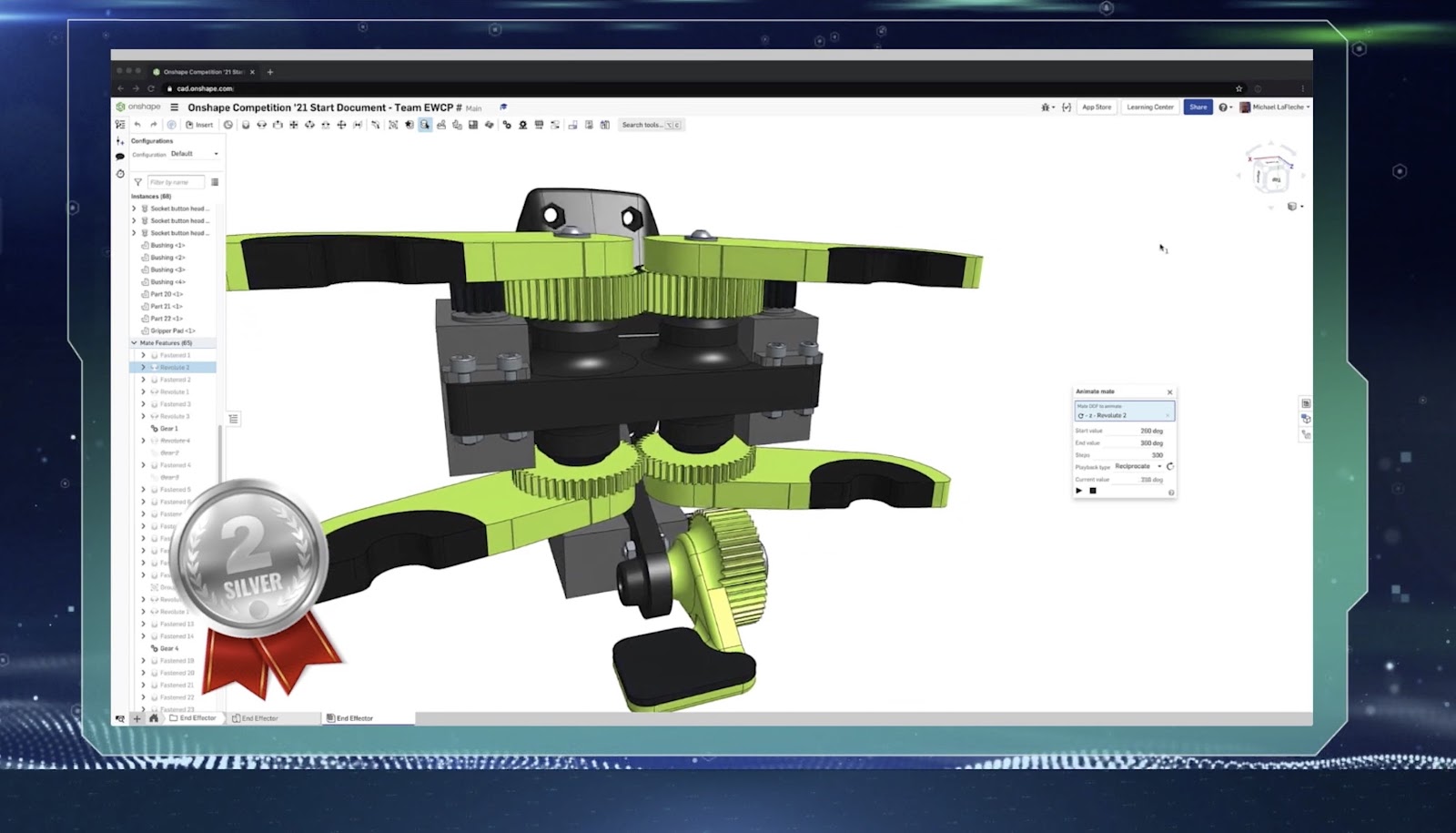 What brings this diverse group of engineers together is that they all volunteer as mentors for their local schools’ FIRST Robotics Competition teams. The East-West Collaboration Project (EWCP) is a Slack group of 100+ FIRST mentors who share best practices and advice.

Marshall Massengill, who is a mentor for the Zebracorns (FRC 900) at the North Carolina School of Science and Mathematics, says he and his fellow FIRST mentors have “hyper-competitive personalities” and were eager to have a chance to compete themselves.

“Our group chats about everything from robotics to life – which might be the same thing depending on who you talk to,” he says. “We saw this Onshape competition as a great opportunity to get together, take on a challenge and have some fun.”

Max Westwater, who mentors the Mechanical Advantage (FRC 6328) in Littleton, Massachusetts, says that Onshape has made his job much easier from an IT perspective.

“Just the ease of use and ability to share with students using any computer made it an obvious choice for us,” he says. “The biggest reason we switched to Onshape is that we no longer have to worry about installing software on students’ computers, making sure they’re all on the most up-to-date software, making sure they actually update their changes after they do them. We’ve always had pain points with that.”

“With Onshape, being able to see things happen live and have one source of truth and the version history have all been super helpful,” Westwater adds. “We also love the commenting and markup features. It’s made our design review process so much smoother and made our back-and-forth design process with the students a lot faster.”

So how did the mentors fare in their first design collaboration together?

In their submission, Team EWCP wrote that they “designed a system to easily handle a spray bottle for watering your plants, your cats, your white board, and even you. It sprays! It spritzes! It showers your Work From Home Environment so everything stays hydrated in the dry heat of those miserable quarantine summers.”

The Onshape judges liked that the team modeled a beautiful office space complete with a couch and a cat tree. This team naturally demonstrated their FIRST robotics expertise, designing their end effector in a single Onshape Part Studio applying top-down design methods. They also used the Spur Gear custom feature. Throughout their design process, they utilized versions to keep track of their progress, including one version called “Can’t Find a Cat Model.” Fortunately, they eventually did find a feline CAD model! 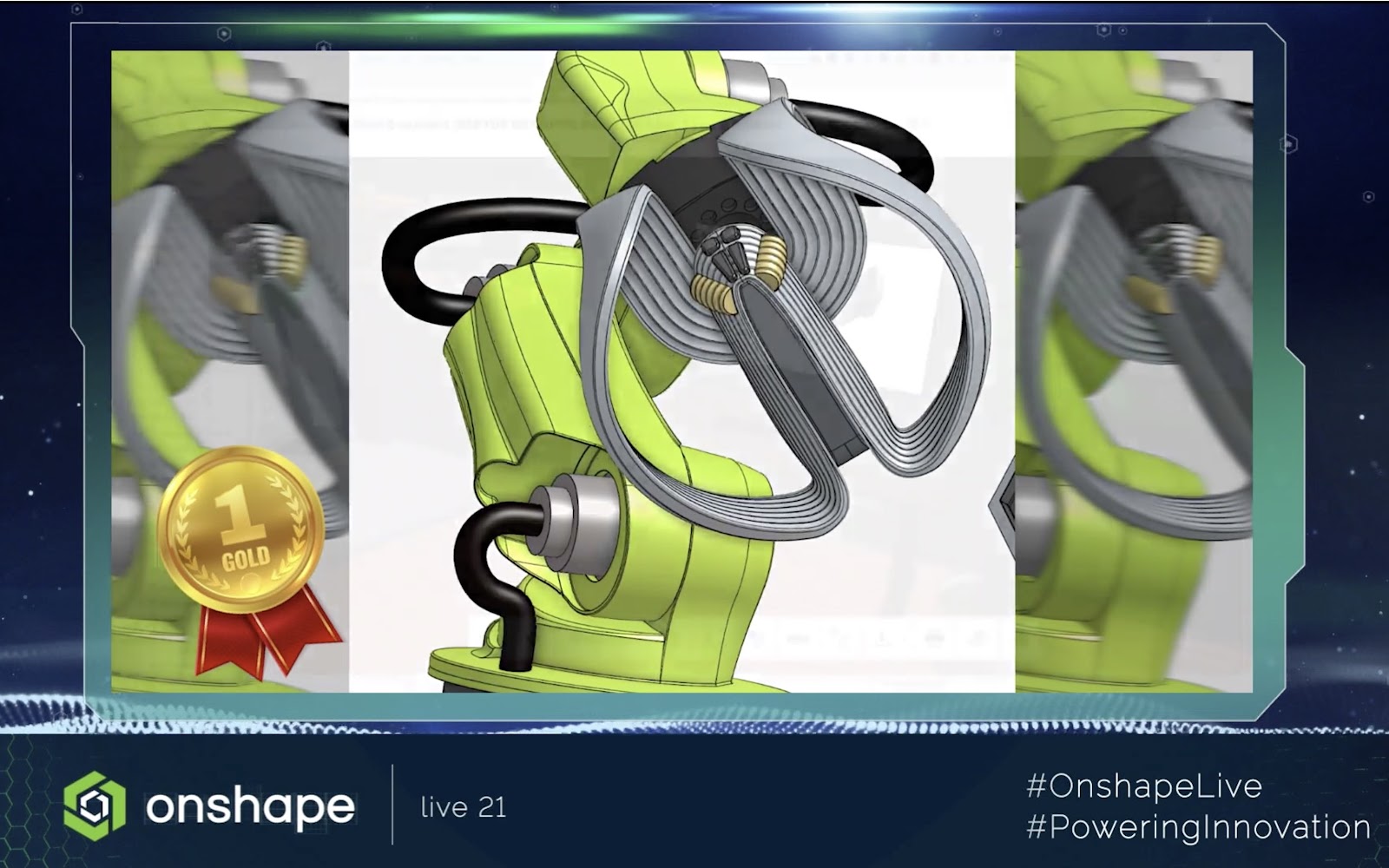 So how did a college student and two established career engineers who never met each other wind up as teammates for this competition? Regular visitors to the Onshape Forums won’t be surprised.

“The Onshape Forums are extremely welcoming,” notes mechanical engineer Michael Pascoe, who models furniture and cabinetry for Cache River Mill. “I've been to other forums and asked questions, and almost the first response you always get is, ‘This is the wrong location,’ and then they'll start virtually yelling at you. But in the Onshape discussions, everyone there is extremely helpful whether you are a beginner or an experienced engineer. So when I invited Alnis and Evan to team up together, I knew they would be exceptionally helpful.”

Echoing Pascoe’s sentiments, Smidchens says he really appreciates the patience that experienced Onshape users have for students and other newbies in the forums. He also was particularly excited to see Onshape sponsor its first formal design competition.

“Competitions are really the best way to test your own abilities and see where you need to go, but also a chance to get some experience in working as fast as possible,” Smidchens says. “That's why you see so many game hackathons or other code-a-thons for programming. For CAD, it's also a really great way to learn and to build something you're proud of in a short amount of time.”

Smidchens, Reese and Pascoe’s winning design was their Raptor 6D Haptic Input, a design intended to lower the barrier of entry to 3D input devices. The Onshape judges were particularly impressed with the robotic arm system that the team created.

Rather than using the robotic arm as a manipulator, they took the unique path of using the arm as an input device. It is intended to behave like a joystick or spacemouse to help the user better manipulate the 3D space. Their end effector is a haptic interface with programmable buttons, and they used a drawing to show off how this haptic interface works. 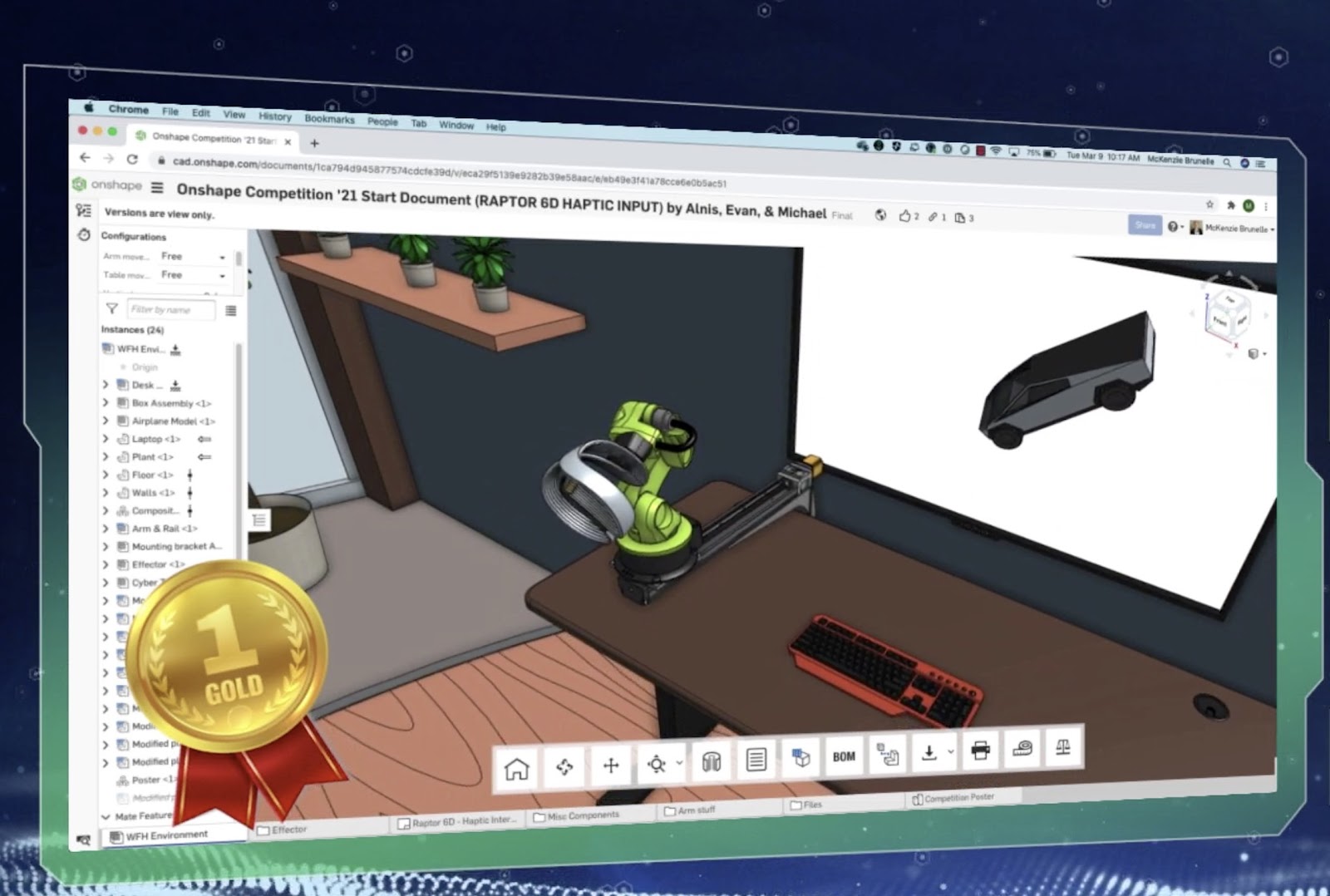 In their work-from-home environment, you can see this system in action. As you manipulate the robotic arm system, the Cybertruck on the monitor is also manipulated. During the competition period, they modeled the Cybertruck by inserting a picture of the truck into their Onshape Document to use as a reference.

To show off some of the versatility of their design, they set Configurations and Named Views to show the arm and table movement.  Since they were collaborating as a team, they utilized versions to keep track of their work and branches to experiment with different designs. The team ended up creating 13 versions during the three hours and merged two branches into their final design.

To learn more about the Onshape Design Competition and what impressed the judges, watch the full Onshape Live awards ceremony video below:

(Visit the Onshape Live ‘21 site to also see other on-demand recorded sessions you may have missed, including a sneak peek at upcoming Onshape features and functionality, tips and tricks for CAD modeling and running a project in Onshape, and recommendations for expanding your engineering toolbox.)