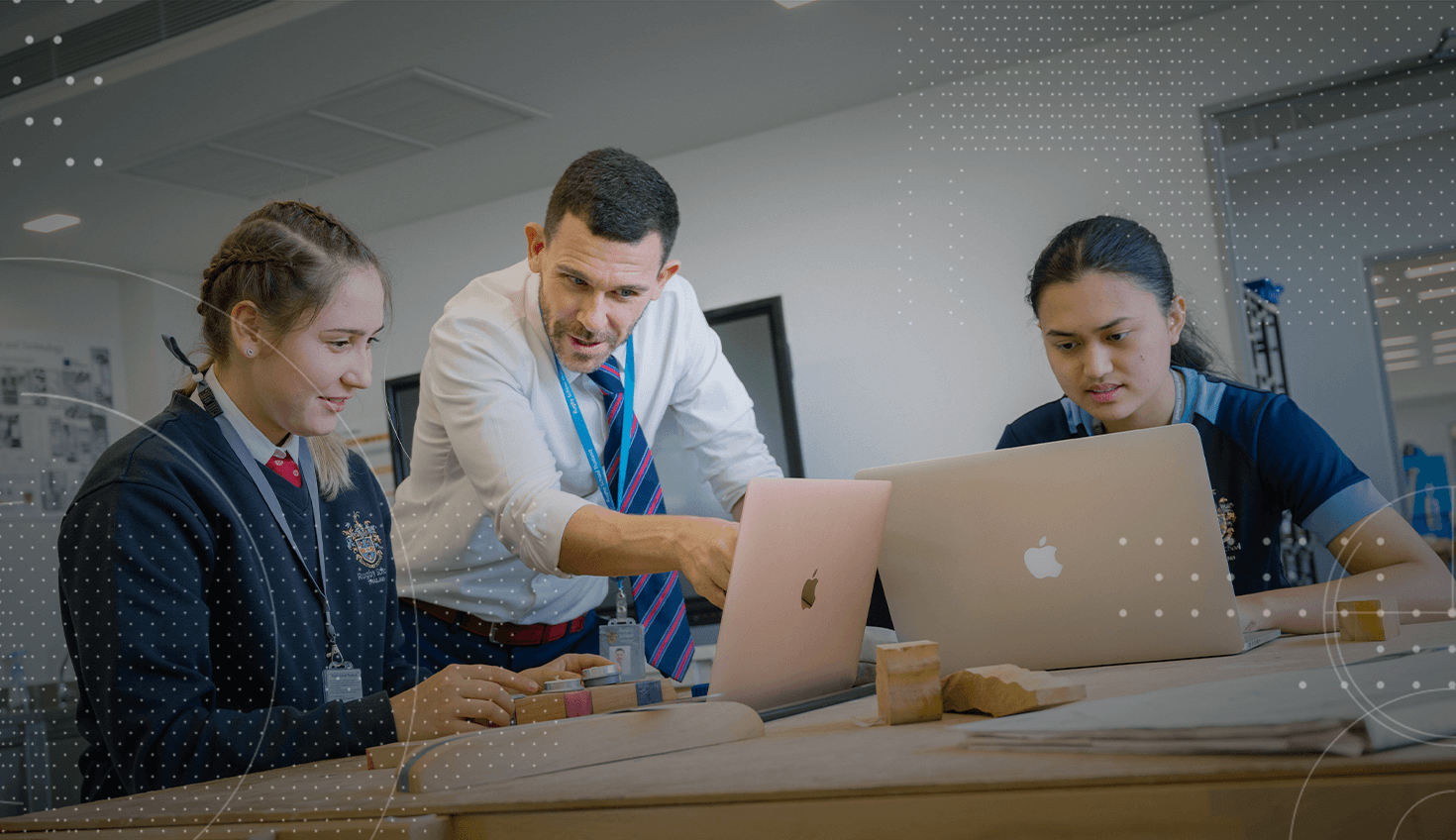 Sitting side by side over a Zoom call, Stuart and Katy Douglas have a habit of finishing each other’s sentences. The married couple are both design and technology (D&T) teachers at the Rugby School Thailand, where Katy heads the D&T department at the prep school and Stuart works as her counterpoint in the senior school. It is here the couple found the opportunity to build a long-dreamed-of D&T pipeline.

Prior to coming to Thailand, both Douglases were design technology teachers at Ripley St Thomas CE Academy in Lancaster, UK. That is, until Katy left to take on the role as the head of department at Sedbergh School in Northern England, moving from teaching A-level students in preparation for university studies to teaching children in Year 5 to 8 in an independent prep school.

During this time, the U.K. government introduced EBaccalaureate, and with it a new focus on traditional topics such as history, geography and modern foreign languages. Due to this shift, Stuart watched his staff shrink as the emphasis on design and technology waned – leaving him unfulfilled

“I viewed from a distance Katy’s happiness at a different school, and so we started looking,” Stuart says of their eventual path to Southeast Asia.

In their search, the couple noticed that support for D&T was thriving in independent schools.

“We were seeing a real recognition of the importance of design and engineering, and the provision for the children that will go into the workforce in the future,” Katy says. The leadership of Sedbergh was looking at ways to support its wider community. Stuart came in as a consultant and the pair found themselves working side by side again.

One day during his hunt for a new permanent role, a lucky change of search parameters brought up the unthinkable – two open positions in D&T at a familiar-sounding institution. One job was in the senior school and one in the prep school.

Rugby School is very well known in the United Kingdom, but these roles were at a new startup branch in Thailand. The combined needs for a head of D&T at both a prep and senior school rarely comes together, and the Douglas’s were excited to learn how passionately the leadership felt about investing in their subject. In Southeast Asia, Stuart says design and technology is deeply valued.

They made the life-changing decision to emigrate with their two young sons. “It was a case of leaving everything we knew to move abroad,” Stuart says, “but what a great decision.” Heading to a new country wasn’t the only adventure in store for the Douglases. The joint move meant students who began learning design and technology under Katy’s watch would then move on to Stuart as they moved up to the senior school.

“We really saw the opportunity for a through pathway,” Katy says. “It’s gradually unfolded but in a really positive way.” Now the pair can watch children progress on an 11-year D&T path, from age 7 to age 18 before they move on to university.

“It was an opportunity to build something,” Stuart says. In prior roles, they could see up to 270 students a year without any influence on what those students had done before.

The school has only been open since 2017, so while it builds its enrollment, classes in both the prep and senior schools have fewer than 20 students. In Stuart’s classes, girls slightly outnumber the boys, electing to remain in D&T despite larger trends that girls normally might not stick with such a program.

Stuart believes the emphasis on digital design and sketching helps change the perception of the subject matter from “boys in the workshop.” Stuart also believes seeing Katy as a role model in the prep school helps both boys and girls accept that D&T is a path for anyone, regardless of their gender.

When the couple was still at Ripley St Thomas, Katy read about Onshape and expressed her interest in the CAD tool. Stuart suggested she give it a try in 2015.

She enjoyed using Onshape and found that its intuitive interface gave children the opportunity to learn as they go, instead of being scared of messing up a model.

After arriving in Thailand, the Douglas’s sought a digital workflow for their students. The leadership agreed to furnish their schools with iMacs and in their first two years, the prep and senior schools were in the same building, sharing machines.

But Katy was always in Stuart’s ear, saying, “Onshape! Onshape!”

Onshape and a Digital Salvation

When the COVID-19 pandemic first hit, Thailand had two periods of remote learning that forced the school to work in different ways.

Onshape became their salvation, Stuart says. He and his colleague Paul, a proficient SOLIDWORKS user with an industry background, planned to have senior school students create a USB lantern as a project. They decided to model reality: You can design remotely, you can model remotely and then manufacture a product, so why not demonstrate to the students this exact path with the school’s laser cutter? Despite having barely touched Onshape, he recalled the echo of his wife and suggested they try the cloud-based CAD tool to make it happen.

While on campus, Stuart knew all students would be working off their iMacs, but once they were forced to learn remotely, the range of devices became mind-boggling. Because Onshape is device agnostic, it allowed students to access the software regardless of what type of device they had handy.

The project was a success and Stuart was delighted with the student outcomes. He and his colleague, Paul Woodward, printed out the students’ lantern parts and flat pack mailed them with assembly instructions and an LED light. The final products required no glue, so the students had everything they needed to see their ideas come to light – quite literally.

They shared their project on Facebook groups, developing accompanying tutorials to weary teachers struggling to recreate normalcy in the sudden remote environments. By summer 2021, the project had been downloaded over 20,000 times.

Katy was less surprised at Onshape’s success in the prep school because she had already been convinced of its power.

“The more we use it, the more it seems to make the most sense,” Stuart says. He praises the intuitive user interface, which has also been an enormous help due to the high percentage of students who speak English as a second language. Although based in Thailand, the students may be from Japan or Russia or Korea.

Katy says the ability to organize her classes and see all her students that have shared under a label has been so helpful. She appreciates the ongoing dialogue the Comments feature enables her to have with her students alongside whatever model they are working on.

Alternate platforms were difficult to bring children through because they would get stuck until an adult intervened. Onshape allows students to keep moving even if features have failed. It also sparks conversation about why the failed extrusion is red on the screen, empowering the child to take ownership of what happened and how to move forward, Katy says. Her weaker learners aren’t stifled and her faster learners can keep working, all while teachers are able to move around the classroom. “Onshape has enabled us to give the students these real deep feelings of success.”

“If you’re a student and it doesn’t work on first click, the natural thought path of a child is, ‘I’m rubbish at this,’” Katy says. If the children don’t feel they have success in a subject, they will rule it out as a career pathway. By age 10, children have already ruled out 90% of careers, so it is critical to make sure they have some early feelings of success. “It’s a very precarious moment in the education of that child within the topic area to then capture them and set them in the right direction.”

Her Year 3 and 4 students use an alternate software package, but from Year 5 forward, all students will use Onshape.

“We can already see the progression and improvement in work,” Katy says. “You look at the work and you wouldn’t guess that it was done by a child so young. The longer that we will have been here, the better the rest of the standards will come, because when children see the work of others, it inspires them to feel that they can, too.”

The Douglas’ long-term plan has always been to use a single software package and develop their students’ mastery in it. Stuart says that even with the lumps and bumps of the pandemic, Katy’s students have created so many awesome models using Onshape.

“And so I then say, ‘I can’t wait to get you in senior school. Just think what you’ll be able to do in three or four years’ time.’”

And when they ask what they will do?

“I just say, You’re going to design ‘stuff’, but I don’t know what ‘stuff’ is because ‘stuff’ covers a huge range of things. And you’ll make that ‘stuff’ and we will help you with all of those decisions along the way,” Stuart says. “But the better you get, the better your decision-making will become and the better ‘stuff’ you will make at the end of it.”

Ready to take your classroom to the cloud? Learn more about Onshape for Education.