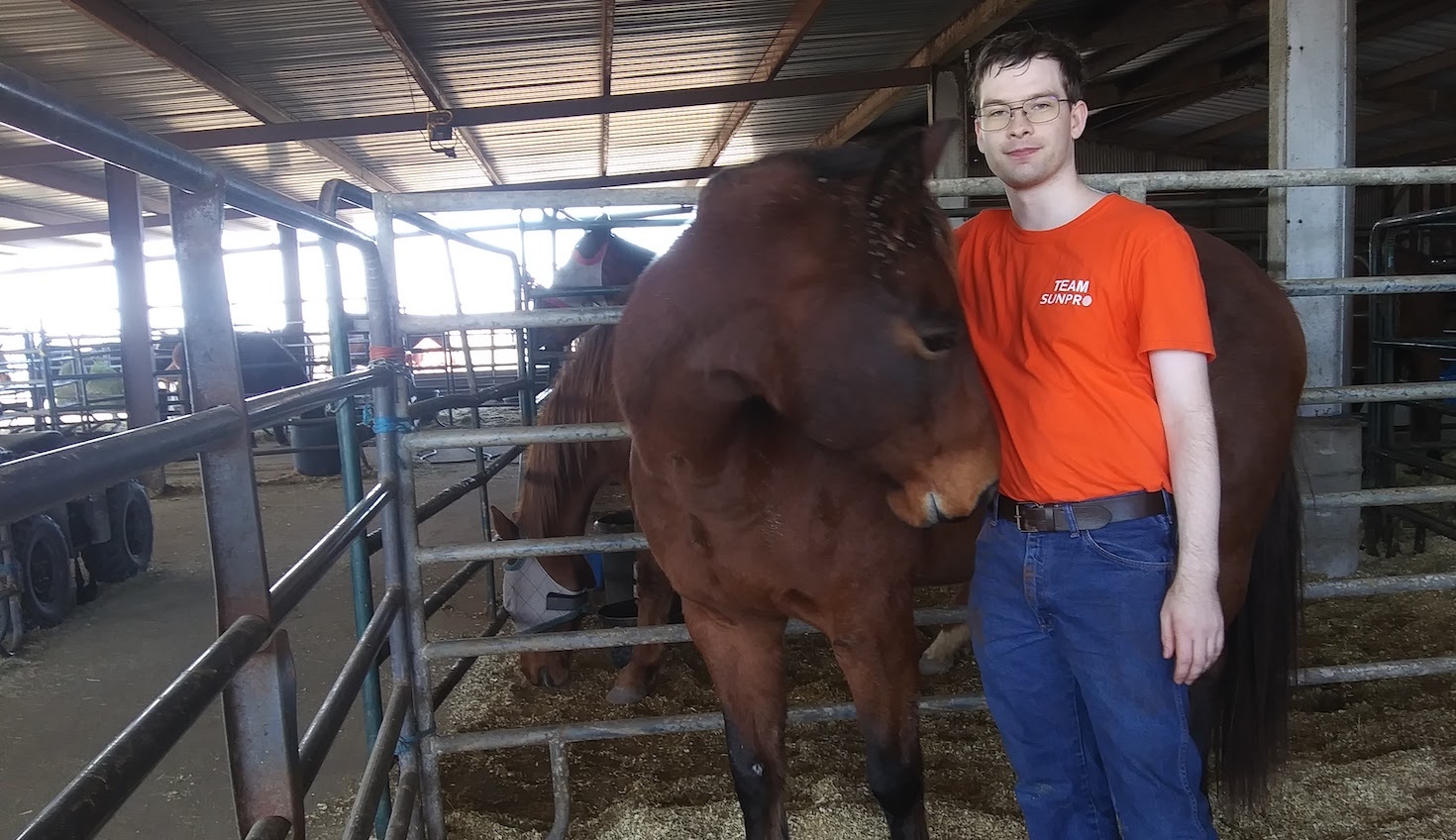 A solar software engineer for a renewable energy company by day, Radzykewycz runs a nonprofit design firm in his spare time devoted to improving the lives of animals and lowering the cost of rehabilitation equipment for veterinarians and horse owners in impoverished areas around the world. The company is playfully named “FuzNuz,” a nod to how horses nuzzle their hair (fuzz) into each other to show affection. Also a mechanical engineer, Radzykewycz shares many of his innovations on Thingiverse, where the public can download his designs for free and 3D-print their own horse equipment.

One notable FuzNuz project in development is the Equine Snoot Adapter, a breathing mask for horses impacted by the wildfires in California, Oregon and elsewhere. The device has attachments for gas mask-like canister air filters that fit over the nostrils, and may include alternative designs that allow for eating while still blocking out smoke. “Sure, it looks weird, and quite comical, but the equine snoot adapter is pretty useful overall,” he writes on Thingiverse. “It is a modernization of designs first produced in World War I during the chemical warfare period.”

Radzykewycz’s reputation for innovation recently put him in touch with the El Alpino Horse Rehabilitation Center, a treatment facility located just outside Buenos Aires, Argentina. El Alpino was trying to rehab one of its mares, Delanna, whose right front hoof was completely torn off her leg in an accident. The horse’s new hoof cartilage was growing in backwards, creating instability and making it extremely difficult to walk without rolling her ankle.

A Prosthetic Solution That Began With a Lump of Clay

The first thing Radzykewycz did after viewing a video of the injury was slap down a hunk of clay on his table and start forming an artificial hoof around his fist. “Clay helped me think about the problem. I said, okay, it’s going to look vaguely like this. This is going to be my planned solution.”

The engineer asked the El Alpino veterinarian to take a 360-degree video of the injured hoof using a regular cell phone. He then took the video footage and loaded it into 3DF Zephyr, a photogrammetry software that automatically constructs 3D models directly from photos and videos.

“Photogrammetry software exports to STL files, so it’s a great way to scan objects without bothering with a very expensive scanning system. I scaled the model and imported it into Onshape. The model had a few rough bumps, but overall it was accurate within a couple of millimeters in most cases,” Radzykewycz says.

Then in Onshape, the engineer built the prosthetic around the misshapen hoof. The prosthetic glides on like a slipper and is held in place with epoxy. Many design elements are similar to elements of his recreational hoof boots, removable hoof coverings meant for cushioning horses walking on rocks, ice, snow, sand and rough terrain – think of them as horse sneakers.

>Before and After: Pictured on the left is Delanna’s misshapen hoof growing backwards. On the right is the same injured hoof fitted with a 3D-printed prosthetic.

“In just 24 hours, in a language I don’t speak, I was able to send them a 3D-printable file for a customized prosthetic for a horse I’ve never directly seen. Thankfully, we were able to communicate with help from Google Translate,” Radzykewycz says. “The new hoof might not look so attractive, but it’s functional and the horse can put her full weight on it. It works exactly like a real hoof pointing forward.”

“Imagine that you had a permanent shoe that was rounded on the bottom and you’re trying to stay standing. You’d keep falling over,” he adds. “Because hooves grow all the time and change shape, we’ll have to make other iterations. But for me, the feeling when I saw this work was almost as exciting as if I had sent the design to the moon – because that’s just as far away as far as I’m concerned.” 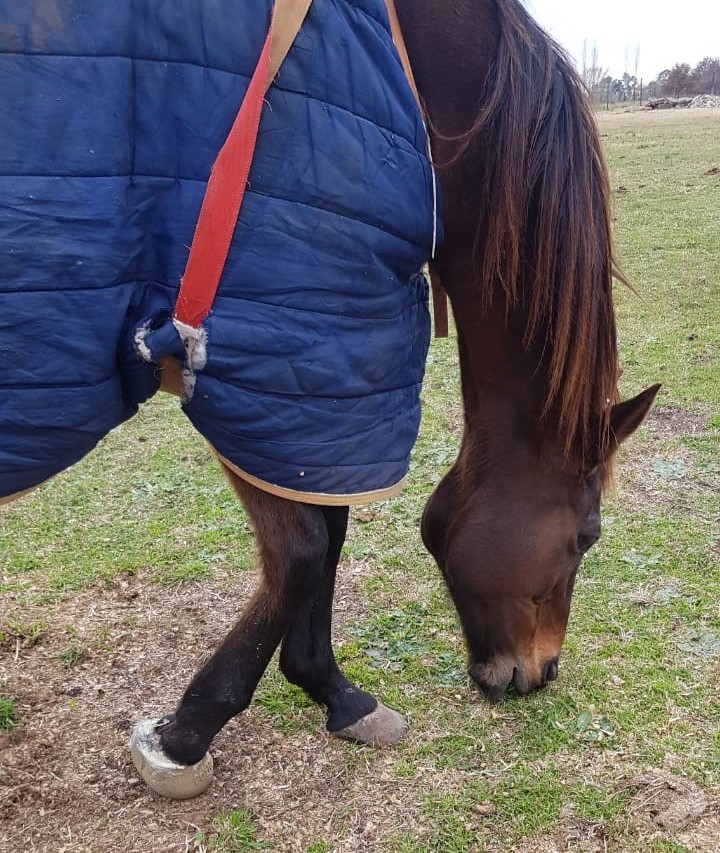 Delanna, a mare in Argentina, is now able to stand steadily thanks to the 3D-printed prosthetic hoof designed by FuzNuz engineer Nicholas Radzykewycz.

Radzykewycz, a 2017 mechanical engineering graduate of the South Dakota School of Mines and Technology, first discovered Onshape while he was active in the school’s 3D Printing Club.

“My courses were taught in SOLIDWORKS, but I was looking for a CAD package that ran in the cloud. The truth is that I didn’t have the money for a high-performance laptop at the time, so having an online platform where you can have all your calculations done and do the heavy lifting on a server was amazing for me just starting out,” he recalls. “I love the portability of Onshape, that I can log into it from someone else’s computer. I outsource all my manufacturing when I do my prototype testing – I don’t want to maintain a 3D printer – so I can directly log into their computer and access my designs whenever I need them.”

“I see huge potential for more collaboration between engineers and veterinarians. I can send my Onshape 3D models to an expert anywhere in the world and have them take a look at it. It’s so much more powerful than staring at a 2D picture,” Radzykewycz says. “There’s also huge potential with the double-teaming of CAD and photogrammetry software. You no longer need a $5,000 LiDAR scanner. Nearly everyone has a cell phone.”

“I’m hoping I can help make custom work more affordable in the veterinary world. For example, something like a horse dental brace generally costs $400 to $1,000. So when you 3D print one for $30, you not only justify the cost of the print itself but also the cost of the printer to make it with. There’s just so much promise here,” he adds.

Back in Argentina, life is looking much more promising for Delanna, too. According to the El Alpino Horse Rehabilitation Center, she just gave birth to her second foal. 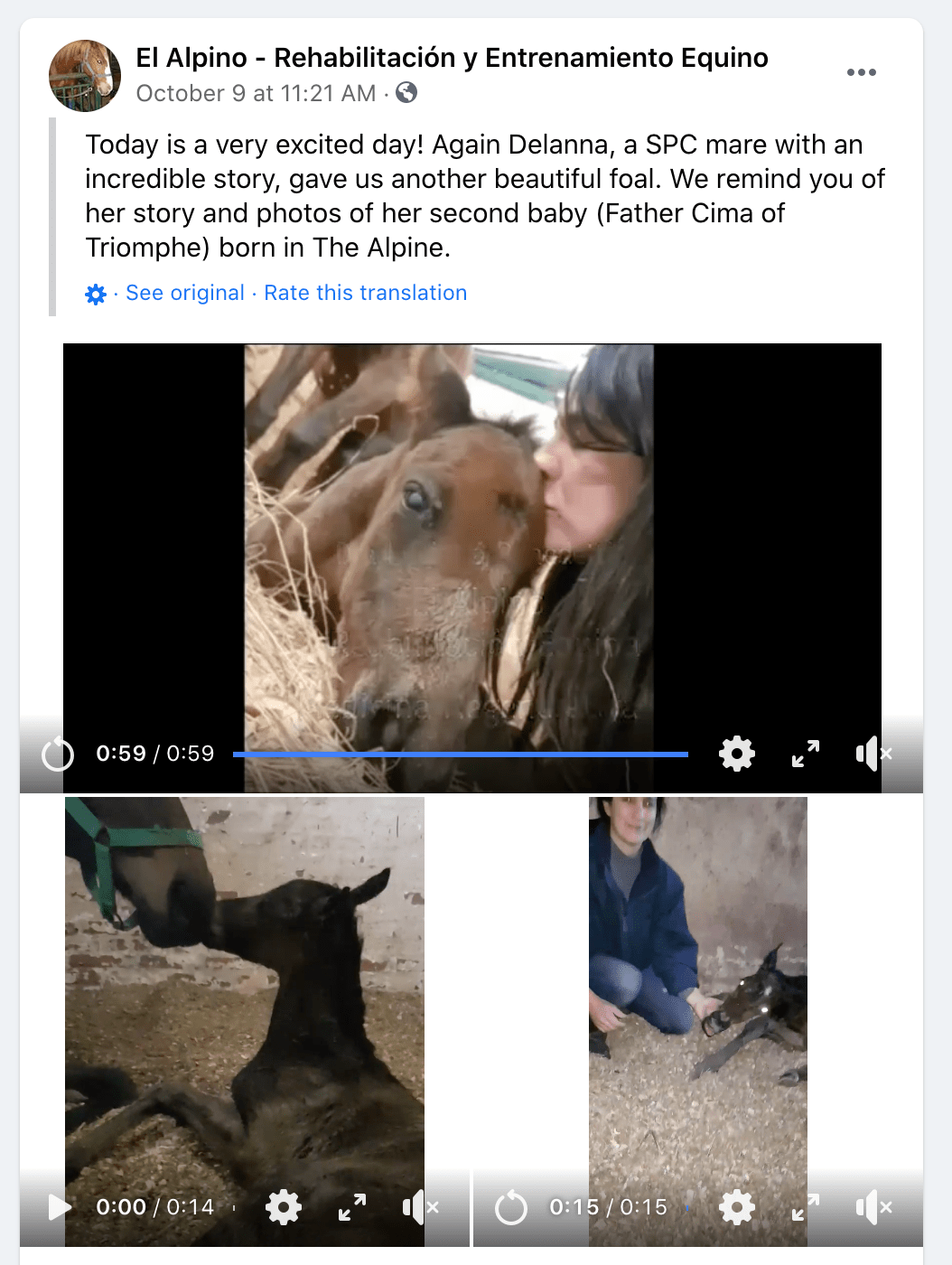