In the earliest days of the COVID-19 pandemic, U.S. government officials asked hardware startup Meter to design an affordable and scalable hospital-grade ventilator to address anticipated nationwide shortages. To avoid undermining the already-strained supply chain, the design needed to be created with other readily available machine parts not earmarked for specialized medical use. In addition, Meter’s engineering team was forced to work from home by the pandemic’s shelter-in-place mandates. 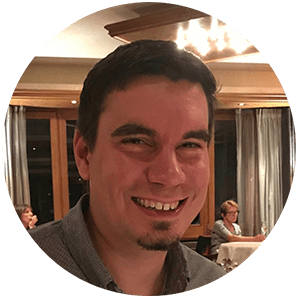 “Onshape was just incredibly valuable for us. We were moving way too fast to deal with emailing files around or setting up servers and a lot of the other things that we would need to do to have that same level of collaboration if we had been using other CAD packages."

In late March 2020, when medical experts were projecting massive shortages of ventilators needed for COVID-19 patients (and some worst-case-scenario plans called for splitters to put multiple patients on the same ventilator), U.S. government officials approached the Boston‑area hardware startup Meter for help.

Although the startup company was in stealth mode, it took on the challenge of designing a more affordable ventilator that could be rapidly manufactured in high quantities without relying on specialized parts already in high demand for existing ventilators. According to The Washington Post, the price for traditional hospital ventilators can range from $25,000 to $50,000 per unit.

On March 28, Meter pressed the pause button on their company and pivoted their entire team to build the Rise Emergency Ventilator. One of their engineers had previous experience researching manual bag resuscitator controls – the way to accurately monitor airflow going from the bag to the patient’s lungs – at Massachusetts General Hospital, and other team members had deep backgrounds in manufacturing other hardware products at scale.

One of the team’s major focuses was improving the ventilator’s monitor and alarm systems, allowing medical staff to remotely monitor multiple patients at once through web dashboards and text alerts.

But the Meter team’s unique expertise and experience couldn’t prepare them for a most formidable roadblock. All of the engineers were forced to work at home by the pandemic’s shelter-in-place mandates. 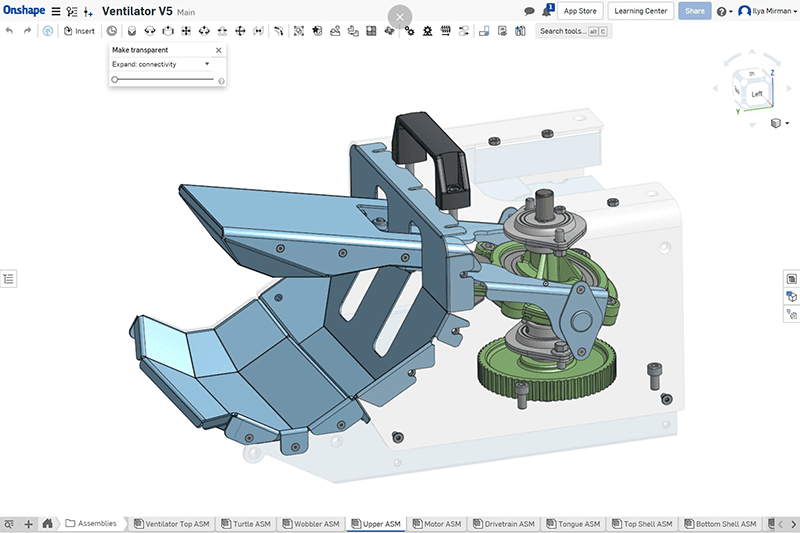 Including Meter’s core team of a dozen engineers, about 50 people were involved in the development of the Rise Emergency Ventilator. The extended team included 3D-printing experts, hospital clinicians, software developers and sheet metal fabricators. There was no lengthy hiring process. The team rapidly expanded by recruiting friends and colleagues from their personal networks.

“In many ways, our development process followed the same approach we usually take, but we had to compress it into hours instead of days and days instead of months,” recalls Eduardo Torrealba, the co-founder and CEO of Meter. “The biggest way we did this was by ramping up the frequency of communication. Individual contributors had multiple daily check-ins on Slack and video chats so we were constantly raising questions, spotting problems and solving them.”

“In the first seven days, we had already done two revisions of the mechanical design and started 3D prints of the first parts over the weekend,” he adds. “I also went a little bit old school and was doing 50 to 60 phone calls a day during this effort. Sometimes you just can’t beat a normal voice call when you need immediate feedback.”

For engineering team members stuck in their individual homes, PTC’s cloud-native Onshape product development platform, which enables multiple people to simultaneously work together on the same CAD model online, was essential for collaboration. Colleagues using Onshape can instantly provide feedback on each other’s work as easily as making a comment in Google Docs or on social media.

“The fact that the tool was always live was really important for us. We had several design reviews over Zoom with 8 or 10 people and somebody would share their screen as they manipulated the model,” says Torrealba. “If someone had a question they didn't just have to say, ‘Okay. Turn it around. Spin it. Do this. Do that.’ They could be in the workspace with the designer and highlight things and make edits in a much more collaborative way than I've seen with any other CAD platform.”

For sharing designs with external partners, such as the sheet metal fabrication experts at Prototek, the Rise team relied on Onshape’s Sharing feature, which allows teams to grant instant access to collaborators with varying levels of permissions. Partners can view, edit or comment on designs in a web browser with no need to download or install special software.

“Onshape was just incredibly valuable for us,” Torrealba adds. “We were moving way too fast to deal with emailing files around or setting up servers and a lot of the other things that we would need to do to have that same level of collaboration if we had been using other CAD packages.” 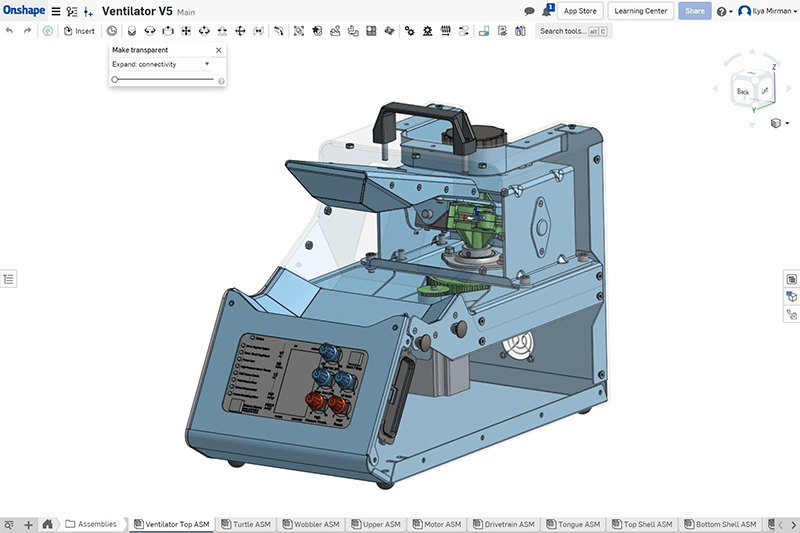 The Rise Emergency Ventilator went through six design iterations in three weeks – the equivalent of introducing a new improved version every 3.5 days. With Onshape’s real-time data management, everyone on the design team can see changes as they happen. A comprehensive Edit History tracks who made what change and when, allowing teams to instantly revert back to any prior state of the design if desired.

Torrealba says that Onshape gave the Rise team confidence that they were always working on the latest version of their design, significantly reducing the likelihood of manufacturing errors.

“We never had any designs released to a manufacturer that were the wrong revision,” he recalls. “That’s huge. At every single step of the prototyping stage, all the parts matched up and were the right version. I think about the old world of CAD where you end up exporting zipped files and all this crazy stuff. You send the wrong thing, and half your parts don't fit.”

“I've had that happen with almost every product that I've ever built. So this is a first for us. It was great to see Onshape help us deliver such a streamlined design,” adds Torrealba. 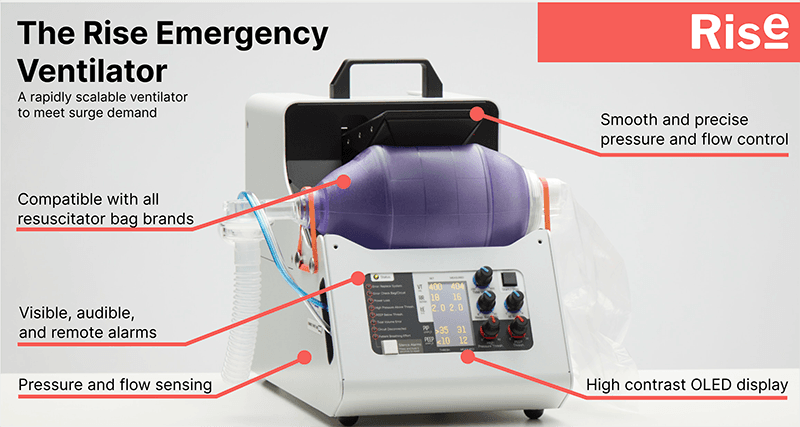 The Rise Emergency Ventilator does not require the same specialized replacement parts currently in high demand by hospitals and other healthcare facilities.

One of the most important objectives of the Rise Emergency Ventilator project was to not undermine existing medical supply chains, already under heavy strain from different U.S. states competing for the same resources. Consequently, the design was created with other readily available components not earmarked for specialized medical use.

The goal was to enable any factory that can make consumer appliances to be able to quickly build tens of thousands of ventilators on demand.

In the early days of prototyping, the Rise team relied on 3D metal printing at Desktop Metal to make standard off-the-shelf parts that were not immediately available because of supply chain problems.

“We actually printed parts that we also ordered from suppliers, but we knew that we were going to get them off the metal 3D printer 24 or 48 hours faster because of the disruption in the logistics networks,” Torrealba says.

“Normally, I would never go through that much trouble to save 24 or 48 hours, but with the speed that we were moving at, it was a huge deal. Because of COVID, we had multiple delayed items we ordered from very dependable suppliers that we work with all of the time. They would say they were delivering tomorrow and then they’d say that for the next three days in a row. Having the dependability of metal 3D printing was incredibly important for us during our prototyping stages,” he adds.

Supply chain issues aside, a teamwide willingness to sacrifice sleep was also critical for success.

“By the end of this, most of us had worked three consecutive 120-hour weeks, which just isn’t sustainable for very long,” Torrealba notes. “But in a time of a crisis, if that needs to happen, it was gratifying to see our team step up and do that.” 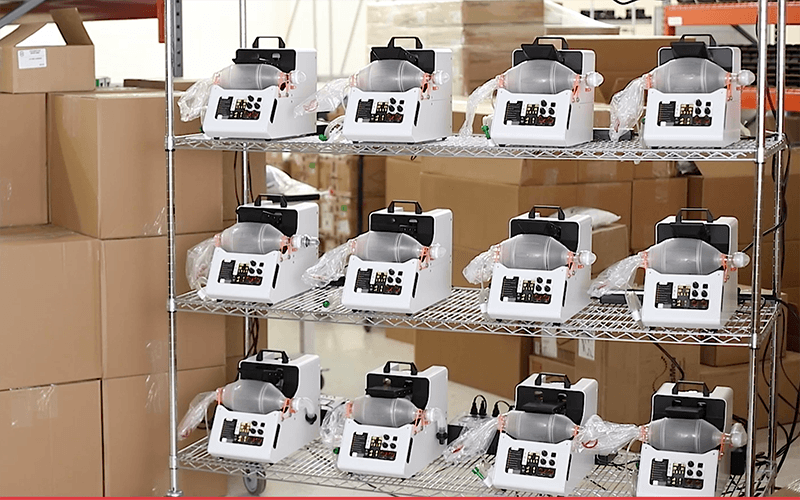 Traditional ventilators were not designed to be quickly manufactured and require specialized parts, equipment and processes that cannot be easily scaled. In order to meet rapid and fluctuating demand, Meter created a ventilator that can be more affordably produced at high volumes.

The Rise Emergency Ventilator was developed in partnership with a coalition of healthcare and technology partners, including PTC, Desktop Metal, CANCAN, Rigado, Formlabs, Prototek, FATHOM, Tulip, Precision Graphics, and CircuitHub.

Fortunately, hospitals have so far avoided the ventilator shortages projected in a worst-case scenario. However, as the world deals with the possibility of future coronavirus variants, Rise is seeking manufacturing partners around the world to be ready to scale up production should a sudden need for ventilators arise. Compared to the current price tag of $25,000 to $50,000 for many existing models, Rise’s ventilator can be made for under $1,000 per unit..

Meter will provide partners with a detailed Bill of Materials, list of suppliers, manufacturing work instructions, and all factory calibration and testing routines. For more information on partnering with Rise, visit https://www.riseventilator.com/.