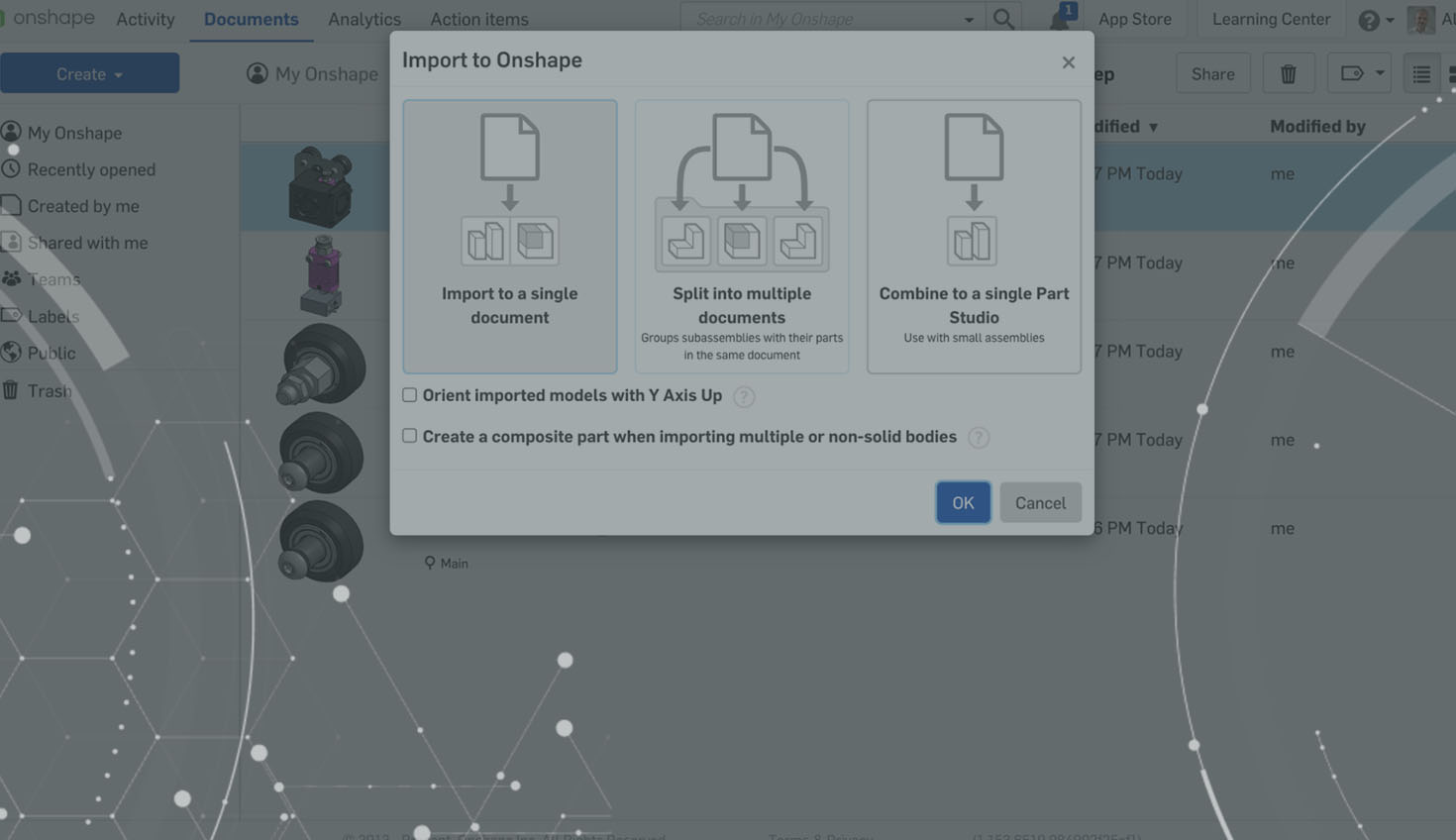 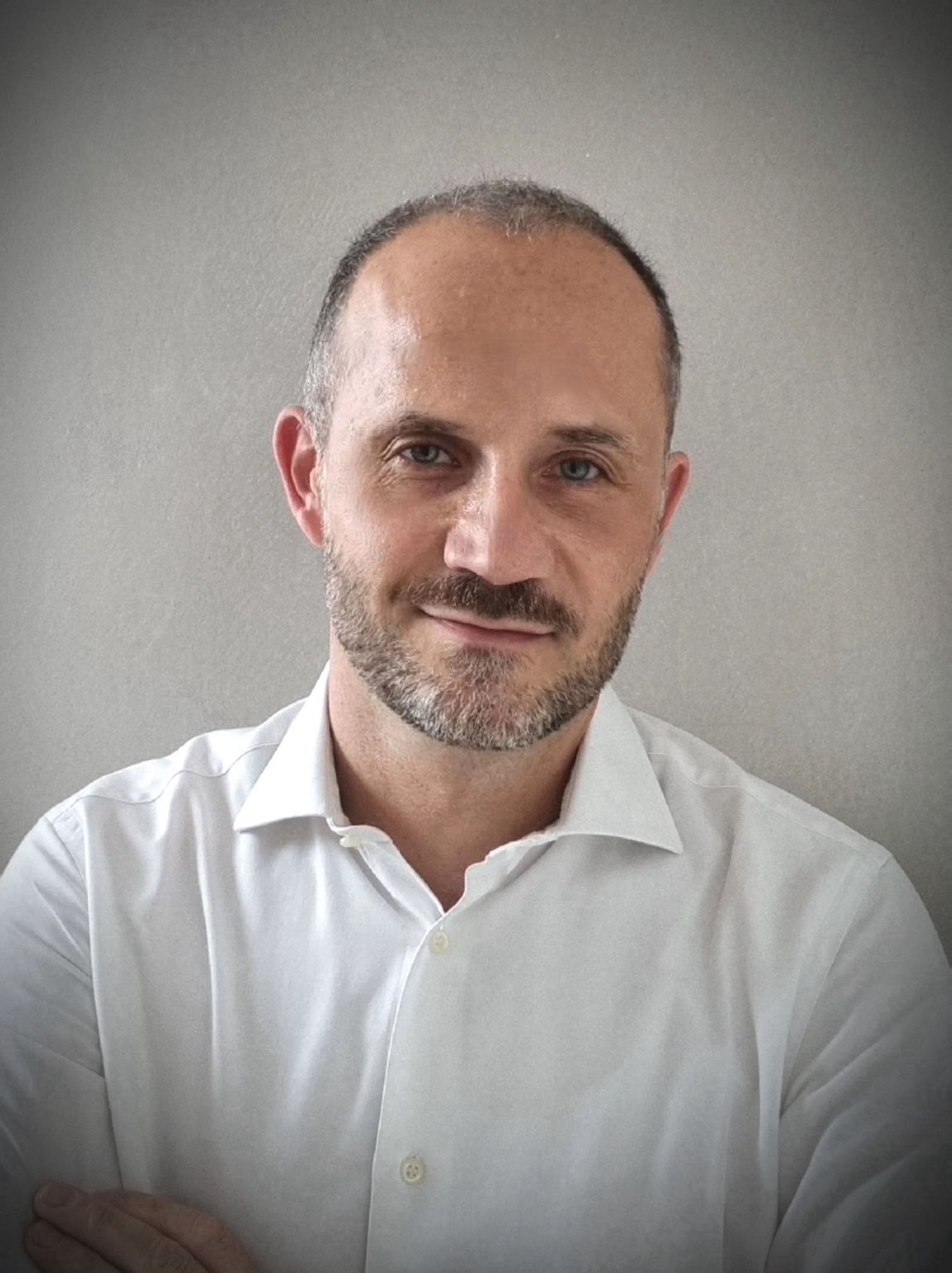 Onshape gives you the opportunity to import – or translate – CAD data from other CAD software in native format or with "interchange" file formats, such as STEP, IGES, and more.

The Onshape import panel has several options and specifications. What are the main differences between them?

This Tech Tip will help you understand Onshape’s import settings and compare the results for each option.

During the importing process, Onshape lets the user decide how to treat the resulting document or documents. But often the user doesn’t verify which is the right option to use in a specific scenario, so let’s quickly go through each option.

In this example, we’ll have a document with the following structure:

Import to a Single Document 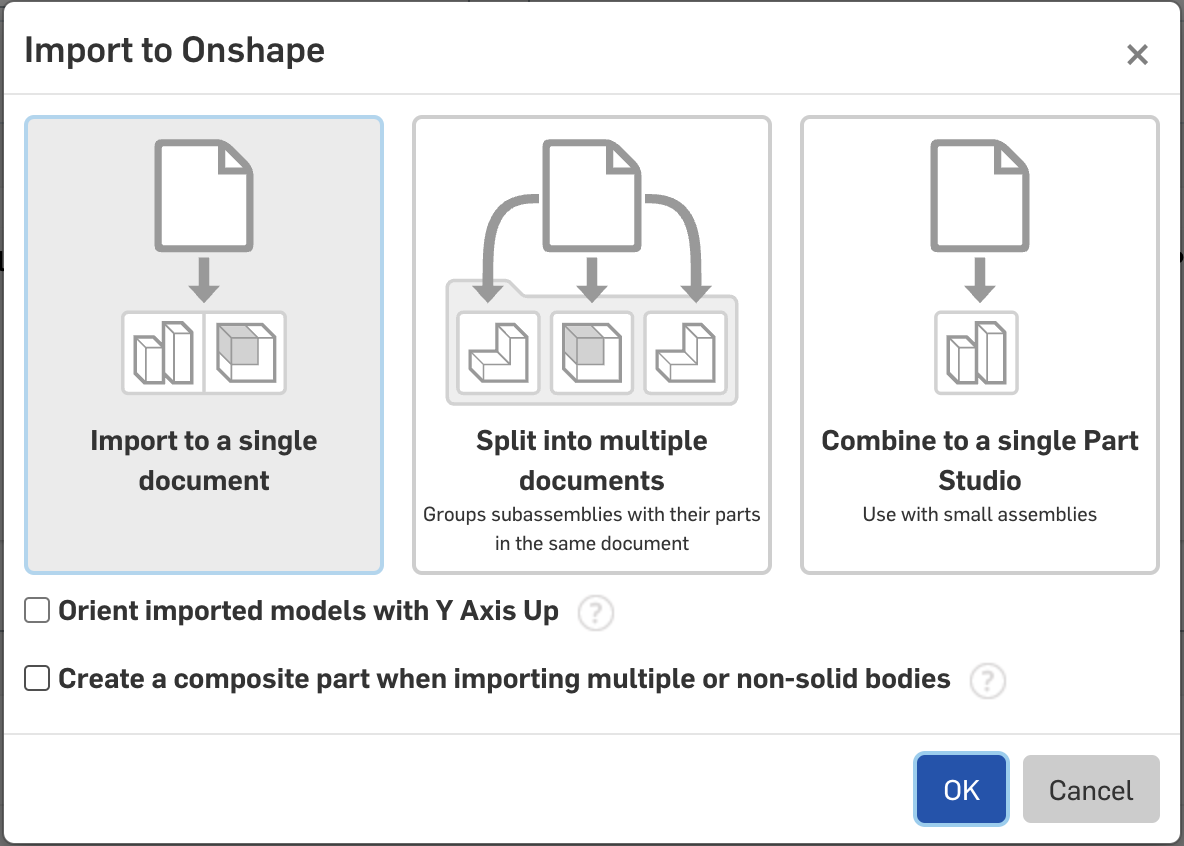 With this option, only one document will be created; if the structure is organized by Assembly-Subassembly-Parts, the result will be the following: 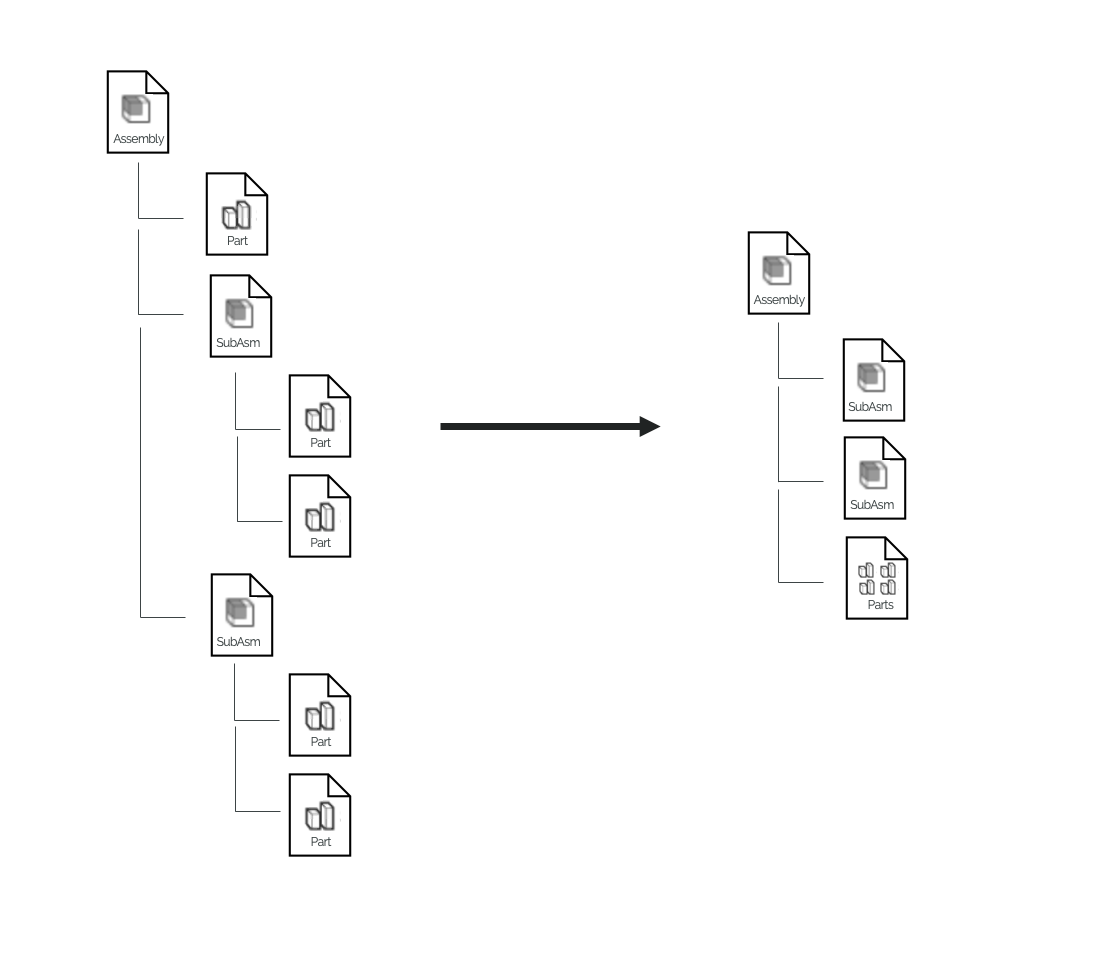 When selecting this option, you can also consider selecting the following specifications: 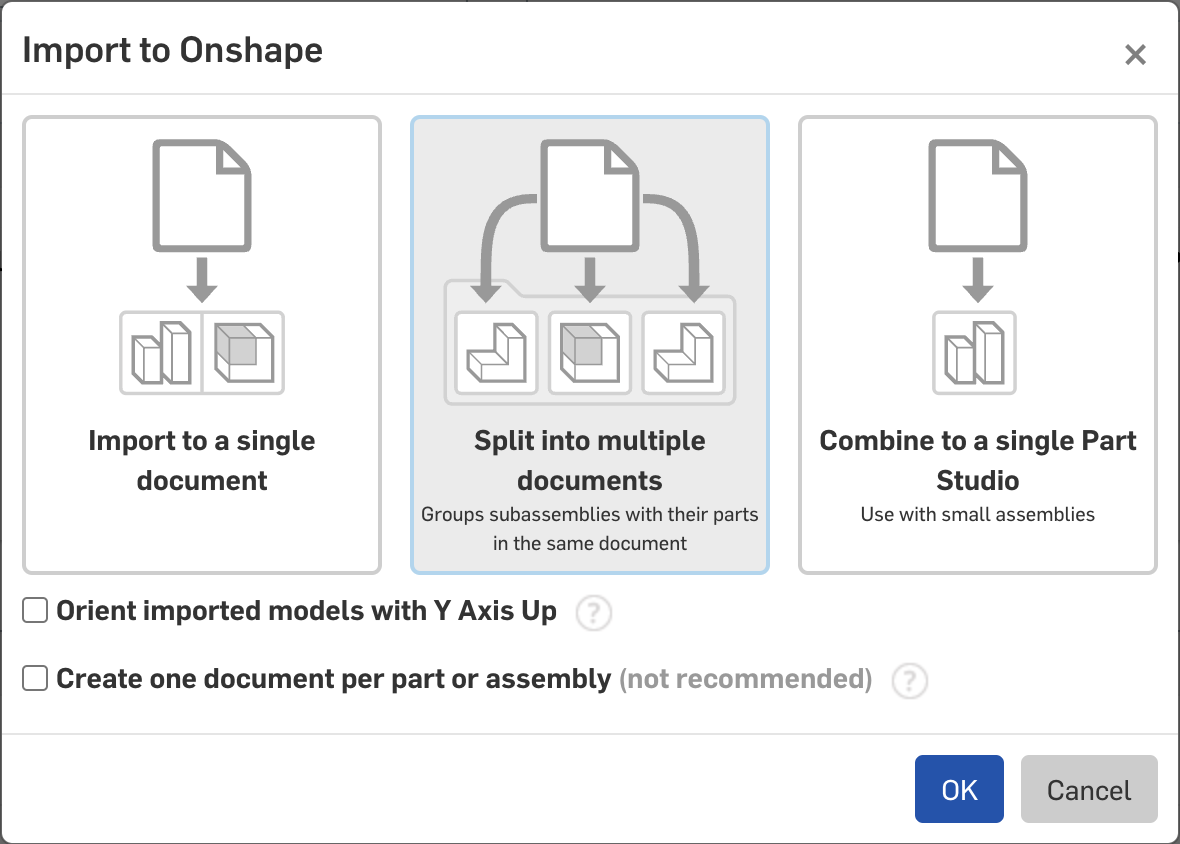 If this option is selected, one document will be created for all assemblies and for all subassembies. For every assembly or subassembly, in each document, all the relative parts will be added, and every part will be split into separate tabs.

If the native part is multi-body, every body will appear as a single part and in a single tab.

When selecting this option, you can also consider checking the following specifications: 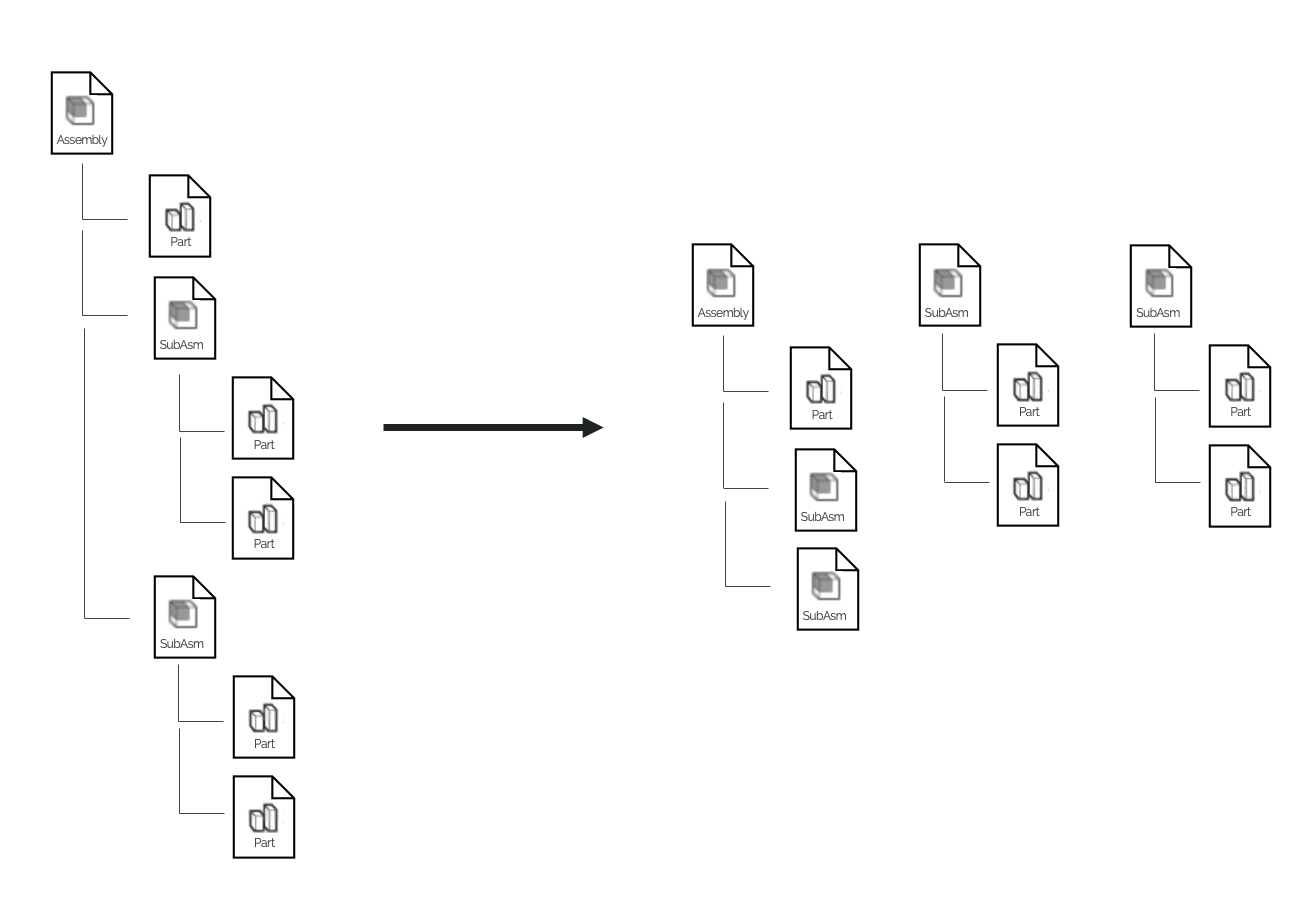 Combine to a Single Part Studio 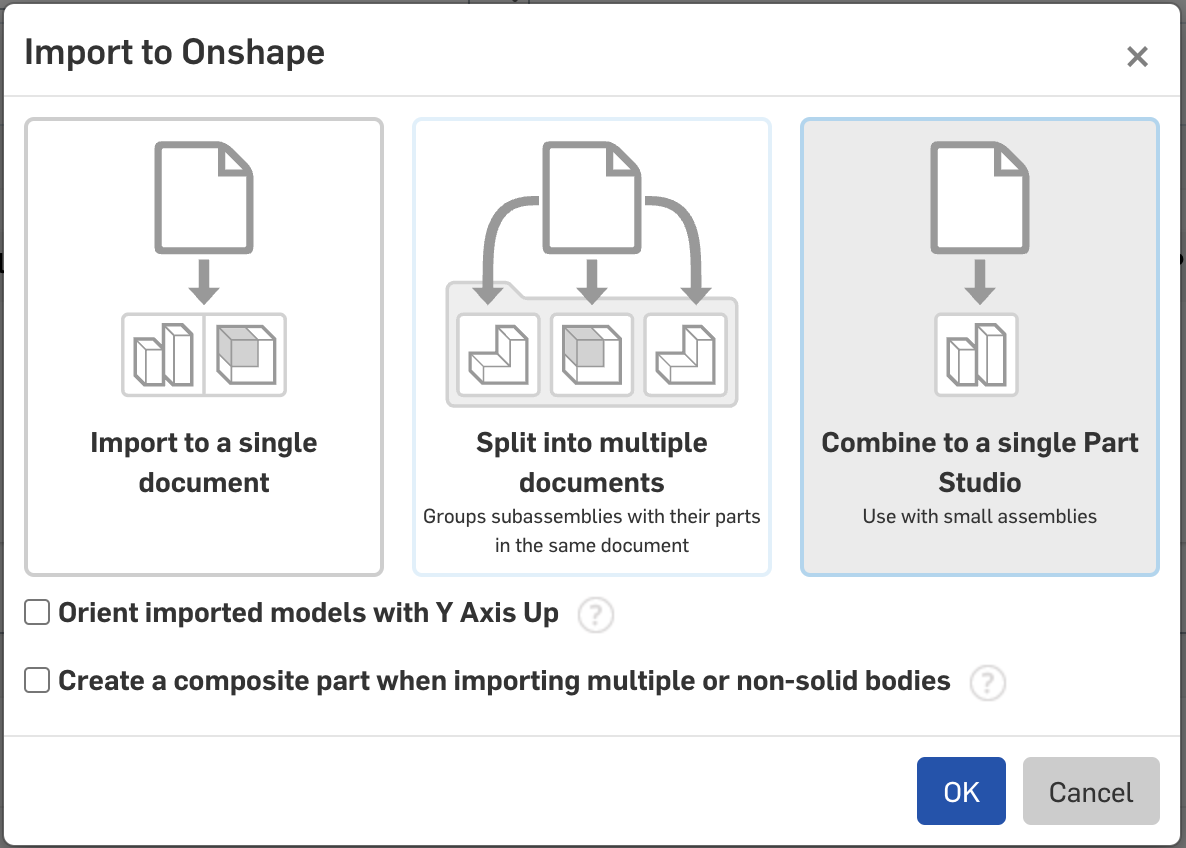 One document will be created with the same name as the document, no subassembly will be created, and there will be only one Part Studio tab, with all the parts inside of it.

Compared to the Import to a Single Document option, the parts will be in the same position where they were in the Assembly.

For multiple instances, like the result of a pattern, multiple parts will be created.

When selecting this option, you can also consider checking the following specifications: 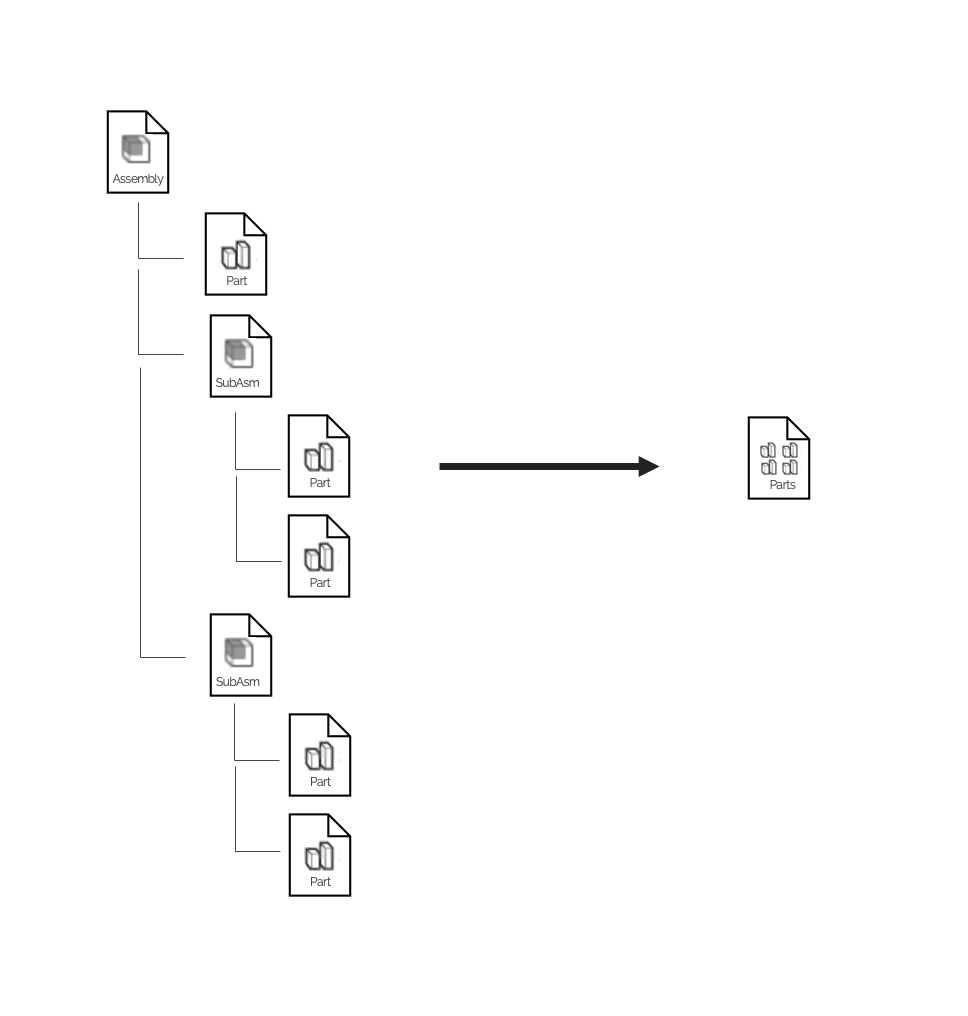 How to Manage Legacy CAD Data

An archive of legacy CAD data can be imported in multiple ways, and in different formats. First, Onshape can open natively a large list of CAD software.

Alternatively, you can import a zipped assembly by following this naming convention: The ZIP filename must match the name of the top-level assembly.

The result from selecting one of the three options will be the same in terms of the hierarchy of tabs and documents. With two quick considerations: A multi-body part with the selection “Import in a single document” or “Split into Multiple documents” will be treated as an Assembly. If you save the assembly as a part, when importing it, the option “Combine to a single Part Studio” will be hidden.

In this Tech Tip, we briefly went through the different options users can choose when importing CAD data from other software.