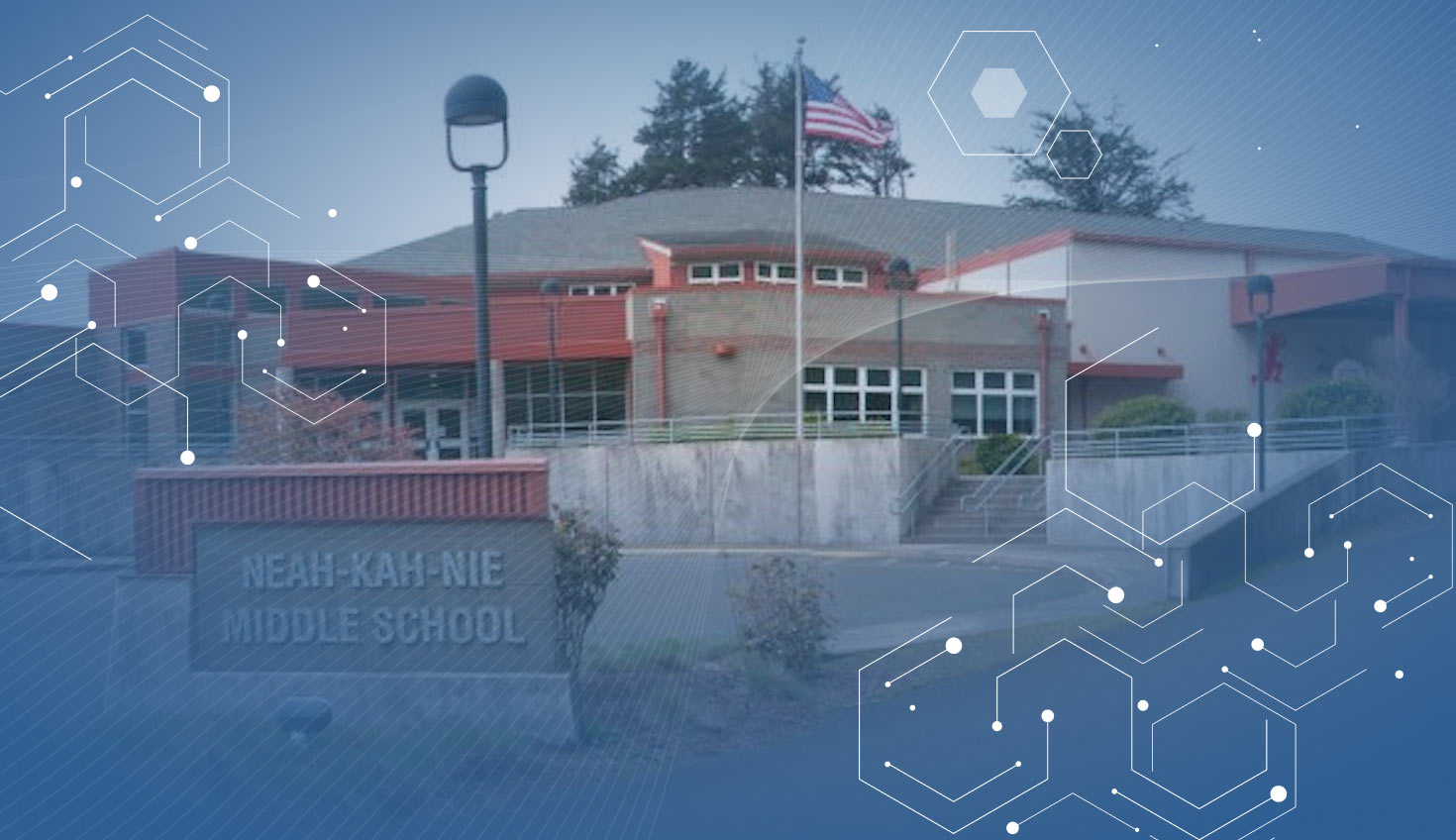 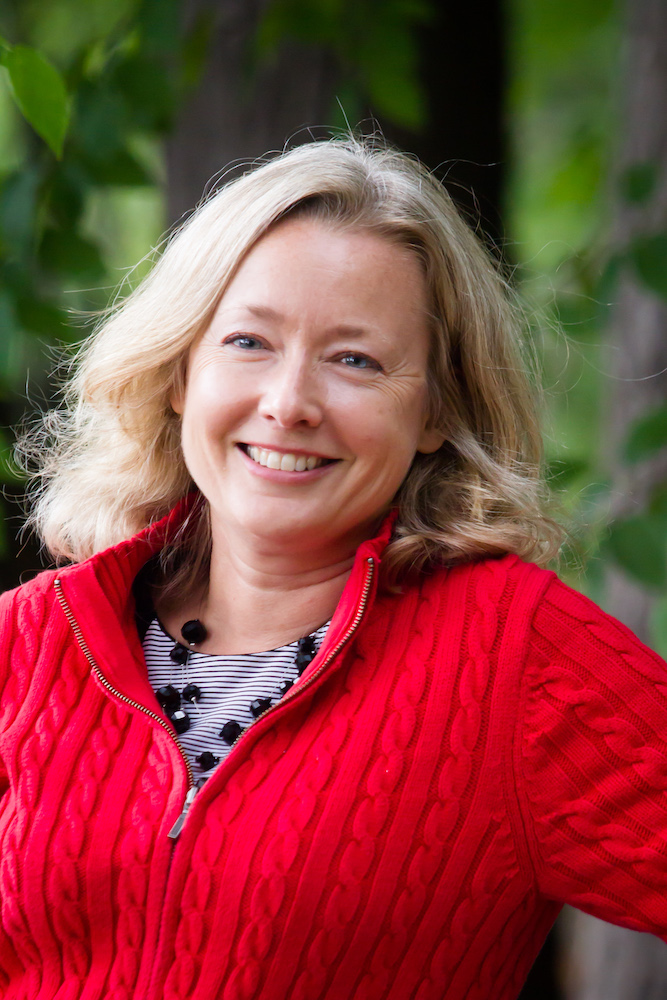 Educator Kathryn Harmon believes that technology and libraries are critical factors for leveling the playing field for people of all economic backgrounds. As a teacher and library media specialist at the Neah-Kah-Nie School District in Rockaway Beach, Oregon, her work in both spheres helps middle and high school students reimagine their capabilities and the potential scope of their futures.

“I love the intersection of library and tech, and creating opportunities for students to gain the skills needed to work in STEM fields,” Harmon says. “Libraries have never just been about books. Libraries were always the places we went to get access to resources we couldn’t afford. Now those tools include 3D printers and other technologies that families might not be able to afford at home.”

A few years ago, Harmon transformed an unused computer lab into her middle school’s first STREAMLab (STEM, plus reading and art) maker space and used the workshop environment to teach students a range of computer programs, including Photoshop and 3D CAD modeling. 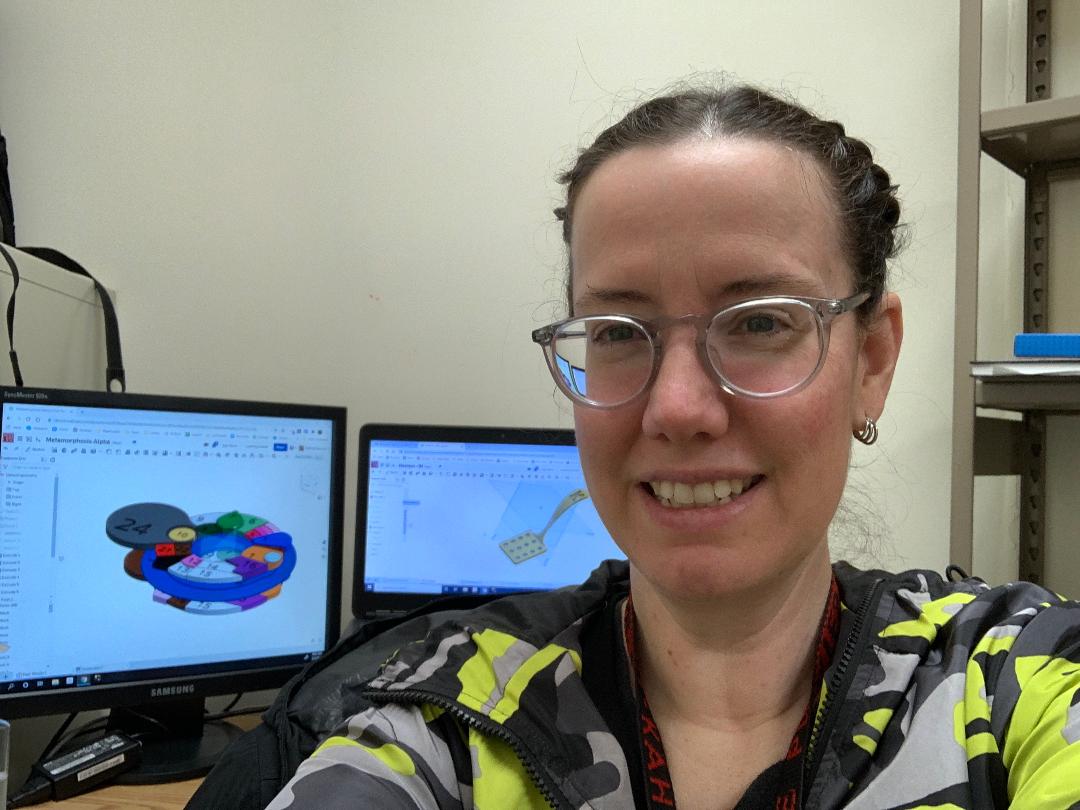 The Pandemic and Remote Learning

The NKN school district is named after Neahkahnie Mountain on the Oregon coast. In the Tillamook Native American language, Neahkahnie means “the place of the God."  This naturally beautiful area, a vacation destination for Portland residents since the early 1900s, has seen its share of hard times. Deeply impacted by the ebb and flow of tourism, the area has generational poverty and, due to the meth and opioid epidemics, grandparents raising grandchildren is not uncommon.

Consequently, when COVID-19 struck Oregon in the spring of 2020, the idea of schoolchildren potentially bringing the virus home to their elders was “even more terrifying,” Harmon says.

As a library media specialist, Harmon is in charge of her school district’s technology integration. She also teaches Interactive Media, an exploratory course in the middle school (grades 6-8) focused on 3D modeling and LEGO robotics. At the high school, she teaches robotics, engineering design, and introduction to electronics. After students were sent home in mid-March 2020, Harmon dropped most of her teaching responsibilities to train teachers in new technology and troubleshoot issues for both students and teachers in the short window the district had to transition to distance learning.

“We had a couple of weeks to get that completely redeveloped and deployed and have everybody trained and working in this new world,” Harmon says. “Luckily, we had enough Chromebooks for every kid in the district to take home. So we were in a much better position than a lot of poorer districts.”

In recognition of her achievements, Harmon received the 2020-2021 Secondary Library Media Specialist of the Year award from the Oregon Association of School Libraries (OASL). The award is given to teacher-librarians who demonstrate exceptional performance as a teacher, an instructional consultant, information specialist, and school librarian and leader.

CAD That Runs on a Chromebook

Because her students all use school-issued Chromebooks, Harmon switched her classes in 2019 to cloud-based Onshape, the only professional CAD system that runs on any computer, tablet or phone (iOS or Android). Her curriculum had previously been using installed 3D design software that required expensive desktop hardware to operate.

“Our previous CAD system would not have been functional during the pandemic because it was Windows-based, and my students are all on Chromebooks,” she notes.

Onshape’s Standard Education Plan is free for students and educators and requires no downloads or installation. Software upgrades are automatically added in the cloud every three weeks, requiring no IT support so schools can devote their IT resources to other priorities.

Harmon was inspired to first try cloud-based 3D design tools after watching a “Future of CAD” TED talk given by Onshape founder Jon Hirschtick, who discussed the real-time collaborative nature of designing products in a web browser.

“My immediate thought was, ‘Oh my gosh, this is going to revolutionize my life!’ For so many years we were told you have to buy this enormously expensive program that won’t work well on your old hardware. Onshape proved you can have this big, amazing worldscape, and it can still work on tiny little devices,” she says. 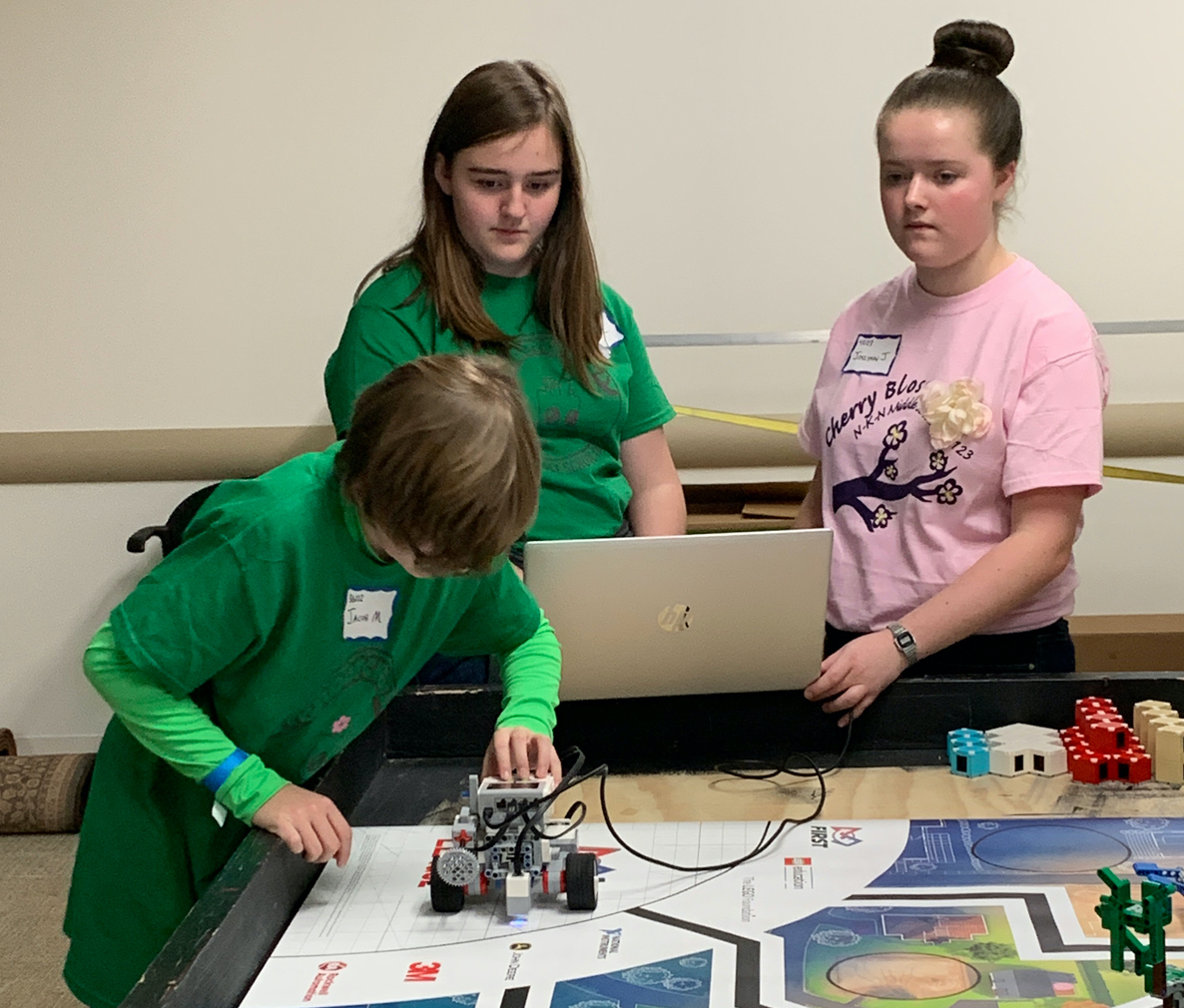 In the fall of 2020, Harmon resumed teaching responsibilities as well as her leadership of the middle school’s FIRST LEGO League and the high school’s FIRST Tech Challenge club.

The NKN school district has sent teams to State for both the FIRST LEGO League and FIRST Tech Challenge, but their teams are rarely competitive. Harmon says the kids decide to participate in the technology clubs “because they’re attracted to my teaching style or what I’m into, which is exploration and joy. Our teams might not place as well as teams of students whose parents are electrical or mechanical engineers, but we always have fun and learn a lot.”

To date, Harmon has created 10 Onshape lessons for middle-schoolers. During the tool lesson, she has each student “adopt a tool,” and share a one-minute video explaining in their own words how to use it. For example, a student might explain how the fillet tool can be used to create rounded edges on a sketch.

“They’re supposed to do it as if they’re explaining it for someone their age or younger,” she says. “Then they do a model assignment, then a final project, and then they choose which of their projects to print. I’ll print off objects for them because we aren’t in school together.”

Harmon familiarized her sixth graders with Onshape through instructive videos and interactive slideshows she created on an education technology platform called Nearpod. The kids can either do live participation mode in class or they can go to Google Classroom and go through the lesson at their own speed. The first lesson Harmon made was about how to login and navigate Onshape. In the beginning of class, students also shared pictures and text they found on the web that helped show or explain what 3D printing is. This participation led to a discussion of the many kinds of 3D printing that exist.

“One of my students shared 3D-printed chocolate objects, and I was able to talk about how the world is our oyster. We can learn to print in any material we can possibly imagine, and that really captures their imagination,” Harmon says.

CAD From the Perspective of an 11-Year-Old 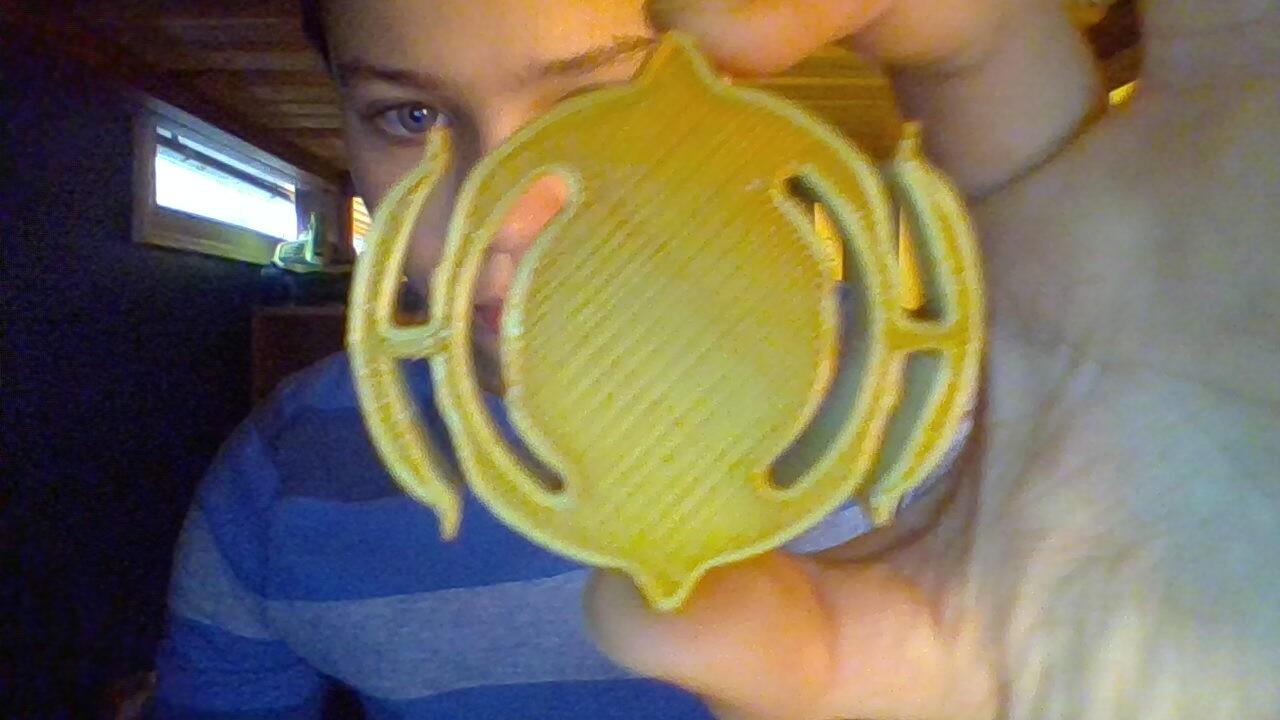 Some of these projects required fairly complex lofting (the generation of curved lines), Harmon notes. For example, one student made a Mandalorian helmet from the Star Wars universe. “If you had asked her last year, she would not even have considered herself to be a techie or remotely technologically minded at all,” Harmon says. “The nice thing about using Onshape is that your gender doesn’t matter. It’s a level playing field to show off your imagination and skills.” 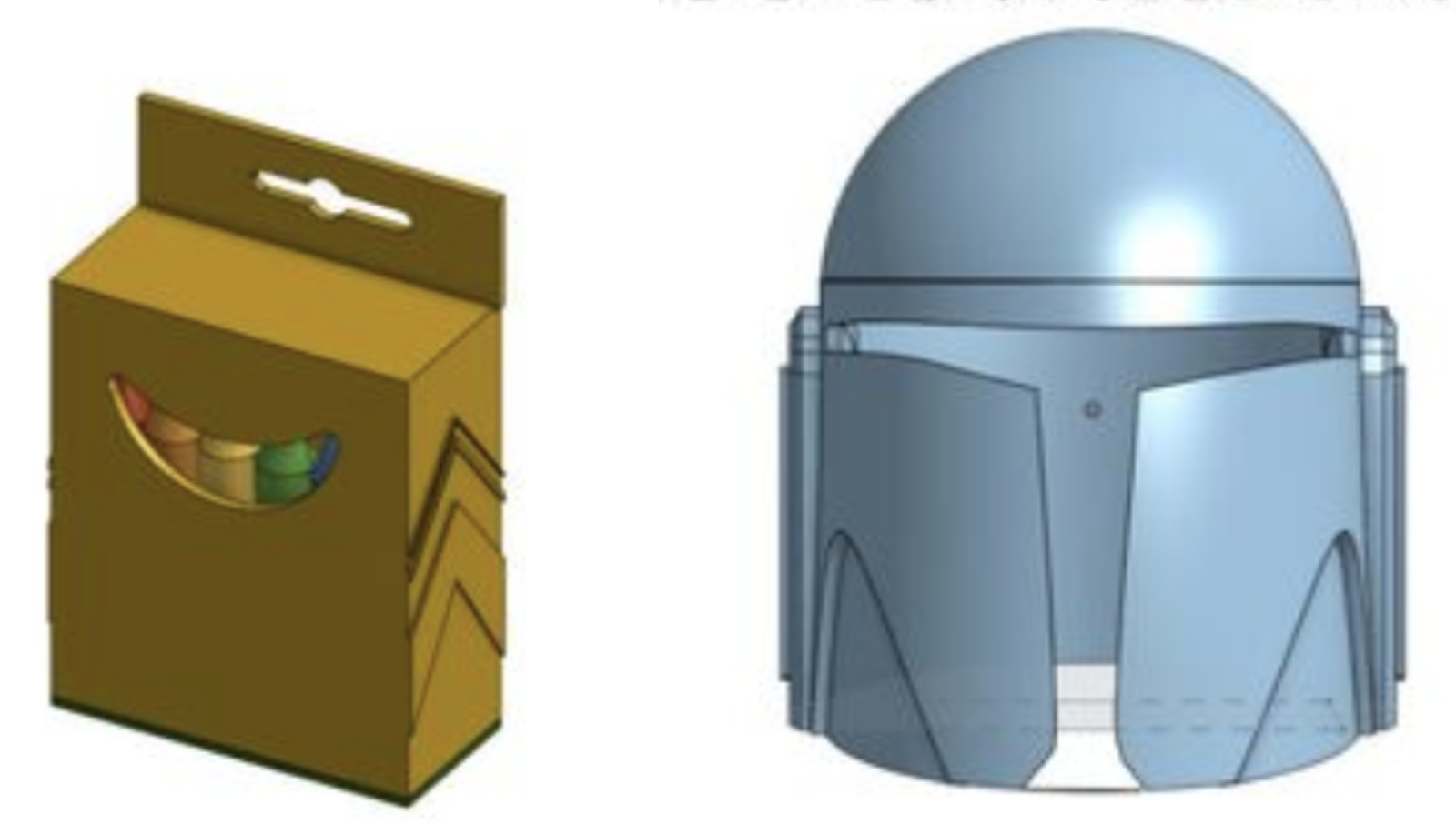 Student Lakyn W. created a winged-heart object and a model of the Eiffel Tower. “The Eiffel Tower was harder to make because of how many planes there were to it,” she says. “I used the loft, extrude/remove, and rectangle tools for my Eiffel Tower. For my winged heart, I used the spline, the extrude, and the fillet tool.”

Student Daniel S. used Onshape to take his hobby of playing with Beyblades spinning tops to the next level. As he explains it, competitors launch Beyblades, which “clash together, and you win by getting three points. One point for knocking your opponent’s bey out of the ring, one point if your bey is still spinning while your opponent’s bey has stopped, and two points for a burst finish. Beyblades can burst into three parts if they are hit hard enough.” (Beyblades are a popular toy developed by Takara Tomy and Hasbro.)

Daniel used Onshape to create a top sized to the dimensions he wanted. After his teacher printed it for him, he continued to use the program, and his father’s 3D printer, which he had never used before, to tweak the top until he felt happy with the design and its attack capabilities.

For tools, Daniel used spline, extrude, mirror, wrap, thicken, dimension, circular pattern, and revolve. At first, he had a hard time remembering what each tool did. However, thanks to what Harmon calls the “light hand holding” that Onshape offers, he was able to refamiliarize himself with tool functions by hovering his mouse over icons in the toolbar to read the prompts for what to do next.

“I like how you can think of something in your mind, make a sketch of it, and bring it to life with Onshape,” he says, adding that he and his father are now printing parts they designed for a robot-controlled car they are building together.

Whether it’s Star Wars helmets or spinning attack tops, from Harmon’s perspective only one thing matters.

“If I can make all my students become problem solvers, I’ll be pretty happy,” she says.

(Find out how your K-12 school or university can benefit from switching to an Onshape Education plan.)