Based in the Netherlands, GKS Packaging specializes in cost-effective packaging machine solutions for a wide variety of products, ranging from garden-fresh vegetables to medical supplies to hardware fasteners. All of its machines are designed and built modularly, using some of the same modules across multiple products. The GKS team was seeking a better way of managing its design changes amongst multiple engineers. The company was also seeking a cloud-native platform to reduce IT overhead. 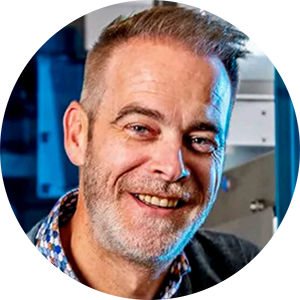 “Before Onshape, you would install updates and just keep your fingers crossed. We’re no longer losing a half day or longer to update our computers. We’re no longer buying a high-performance workstation every three or four years just to run CAD."

Although the packing of onions and potatoes is not considered a glamorous task, the latest vertical form, fill and seal (VFFS) machine by GKS Packaging looks more like a modern art installation than a piece of industrial equipment.

Meeting the surging retail demand for paper food packaging over plastic, the eco-friendly LEAF is a leaf-shaped VFFS machine that produces bags out of 100% recyclable and compostable paper stock. The film roll frame is completely constructed out of recycled ocean plastic, a gesture to raise awareness about global pollution. The machine is also built with stainless steel and other recyclable materials.

The LEAF’s translucent door panels are illuminated with a blue, green or red LED glow to designate its operational status. It’s a behind-the-scenes light show that sticks out in a production line landscape of mostly grey.

“We didn’t just modify an existing machine to achieve ‘acceptable’ results. We definitely wanted the LEAF to stand out from the pack,” says Ivo Geukes, owner of GKS Packaging. “I’m personally a huge fan of Apple and Tesla designs. Design doesn’t cost you any more, per se, you just need to be a little more creative.”

“We could build our machines the same way our competitors do, but then you don’t have your own look and personality. When somebody sees our machines, I want them to immediately know it’s a GKS machine,” he adds. 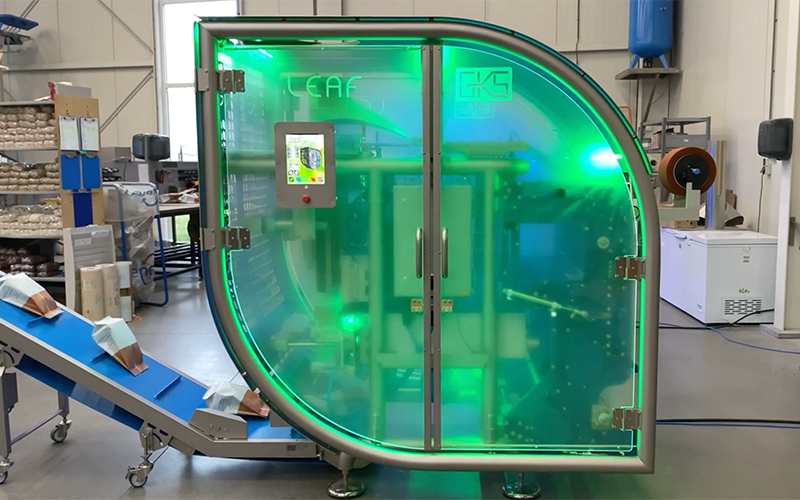 Based in the Netherlands, GKS Packaging specializes in cost-effective modular packaging solutions for a wide variety of products, ranging from garden-fresh vegetables to medical supplies to hardware fasteners. The company also designs and builds weighing systems, dosing systems, conveyor belts, and platforms to customer specifications.

“The GKS design team did a fantastic job rethinking machine basics, for a brief moment forgetting that plastic even exists,” Geukes adds. “The LEAF was built from scratch just to do what it needs to do – produce perfect bags with paper only, without compromises.” 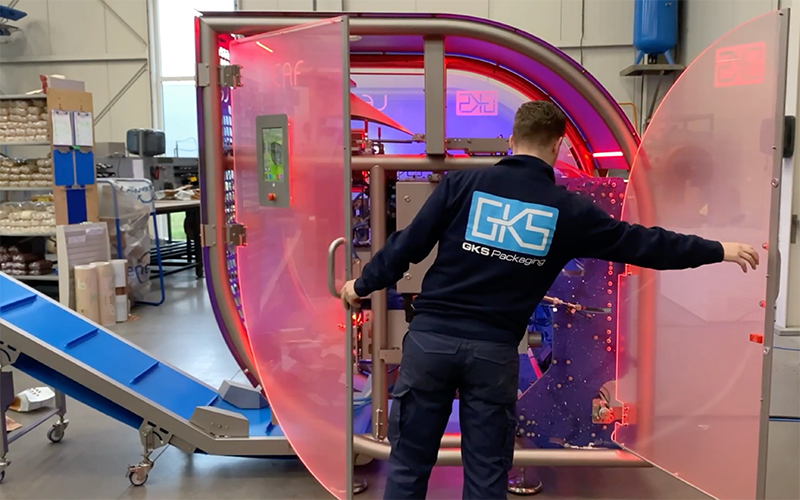 The LEAF packaging machine lights up in red when it needs maintenance.

Like all GKS machines, the LEAF embodies the company slogan of “Inventive Simplicity.” It has a compact design with a limited footprint, a nod to the high premium of space on the factory floor. Modular design makes it easy to switch out modules to change the function of a machine, and it also simplifies maintenance and reduces downtime.

In the time-lapse video below, a maintenance team demonstrates fully assembling a GKS CP 350 packaging machine in under 23 minutes, and completely disassembling it in under 18 minutes. Minimal setup times give companies more flexibility with their production lines.

“Eventually, all machines break down. The big question is how do you handle that? Instead of having a technician coming onsite and working on a machine for a few hours and having people on the production line breathing down his neck, you can just replace a module and be up and running right away,” Geukes says.

“The fact that we build everything modular, and use some of the same modules across several machines, means that we can more easily scale up production. When we start the design of a new machine, we start with our collection of modules and take it from there,” he adds.

The GKS commitment to simplicity also includes minimal tools (non-specialized) for maintenance and the use of widely available standard components whenever possible. For example, the LEAF integrates two iPads as control panels on each side of the machine instead of creating proprietary panels. 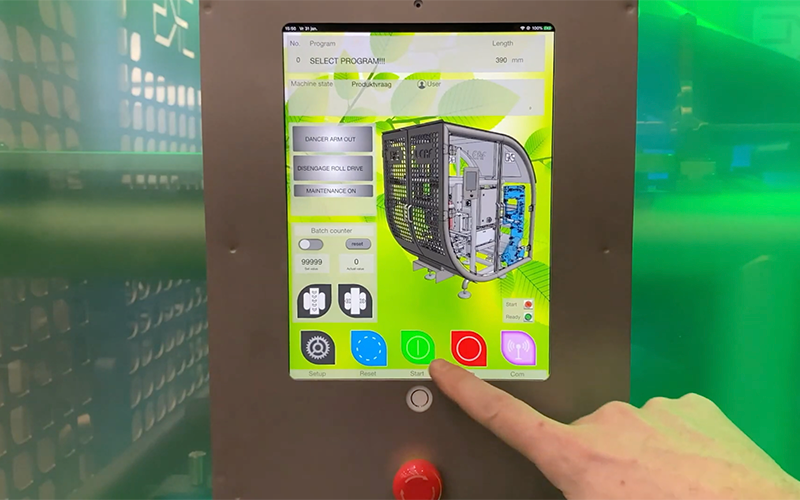 To save its customers money on maintenance, GKS Packaging installed standard iPads as control panels instead of custom touch screens.

“The advantage is that if the screen breaks – and every screen will break every now and then – it won’t cost you a few thousand dollars to replace. It will just cost you a few hundred dollars,” Geukes explains. “You just go to your nearest Apple dealer, buy a new iPad and you’re ready to go.” 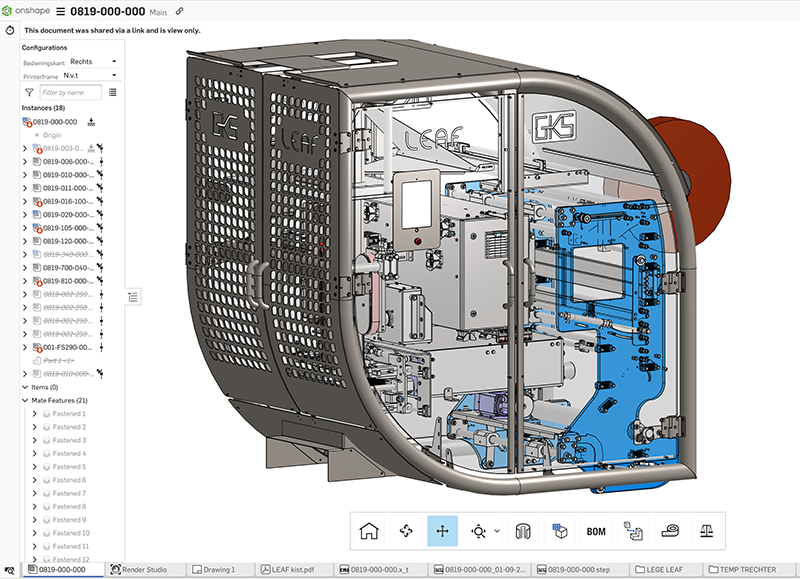 “Each conveyor belt or special weighing system we build is a new design using standard components we’ve used before,” explains Geukes. “When we were using SOLIDWORKS, it would always end up in a mess, especially when you had more than one person working on it.”

“Keeping track of which parts we already had for the assembly and which ones we needed to produce was always difficult. Excuse my French, but using a file-based data management system was always a bitch,” he adds. “If you want to work on a part, but someone else has already opened it, you can only open it as read-only. Data management was always a hassle.”

Onshape’s built-in Product Data Management (PDM) system eliminated these bottlenecks as cloud-native CAD enables multiple engineers to simultaneously work on the same part or assembly. Whenever anyone on the team makes a design change, everyone else instantly sees it. No need to check-in or check-out files. Unlike with old file-based CAD systems, there is no longer any confusion over which version is the latest version. There is a much reduced likelihood of manufacturing the wrong part.

Geukes recalls also frequently running into problems with broken assemblies when he was designing his machines in SOLIDWORKS.

“If you had to make a hole bigger on a part and then open the old assembly, suddenly the whole thing changes and the left side of the screen turns red. It’s your own fault, because you were there when you did it, but it’s frustrating spending hours redoing your old work,” he says. “With Onshape, I now really appreciate the ability to branch a design and create versions. You really have to try your best to mess up an assembly.” 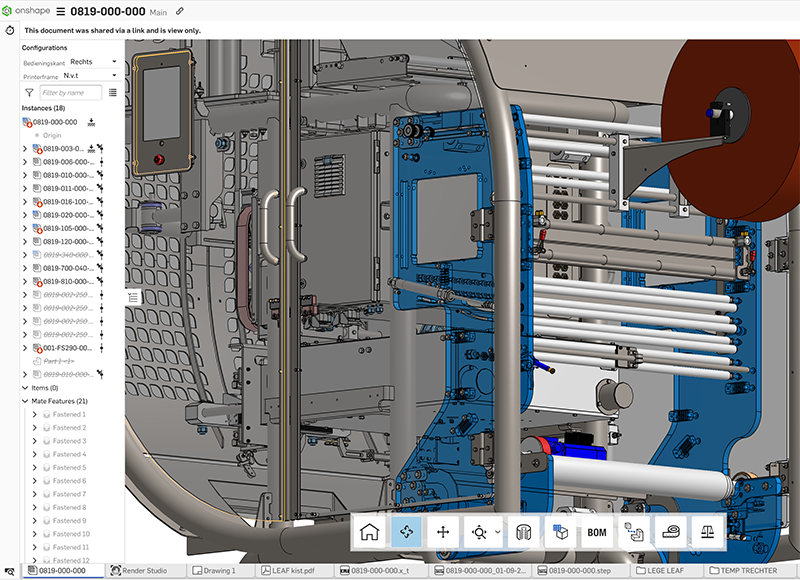 As a cloud-native SaaS platform, Onshape requires no downloads, installation or upgrades. Users are automatically on the latest software version everytime they log on.

According to Geukes, one of the biggest business advantages of using Onshape is its Software-as-a-Service (SaaS) delivery model. Computer workstations are no longer tied to specific software licenses. Engineers can access their CAD work and CAD system on any computer, tablet or phone (Android or iOS) through a secure cloud workspace and easily share their updated models with other company stakeholders across the organization.

“Our production manager can access drawings instead of having to come over to engineering and asking them to make a PDF of the latest version. Now they can do it themselves. All these small things add up,” Geukes says.

“It’s nice that we don’t have to install upgrades anymore. They’re just there. New features are always being added. They are just there,” he says. “Before Onshape, you would install updates and just keep your fingers crossed. We’re no longer losing a half day or longer to update our computers. We’re no longer buying a high-performance workstation every three or four years just to run CAD.”

“For business productivity, SaaS tools are the way to go. I’m a 100 percent believer that they’ve been the future for a while now,” adds Geukes. “If you still want to buy your music on LPs or cassette tapes, or hold onto your MP3 collection, go ahead. But I think that Spotify is much easier to use.”