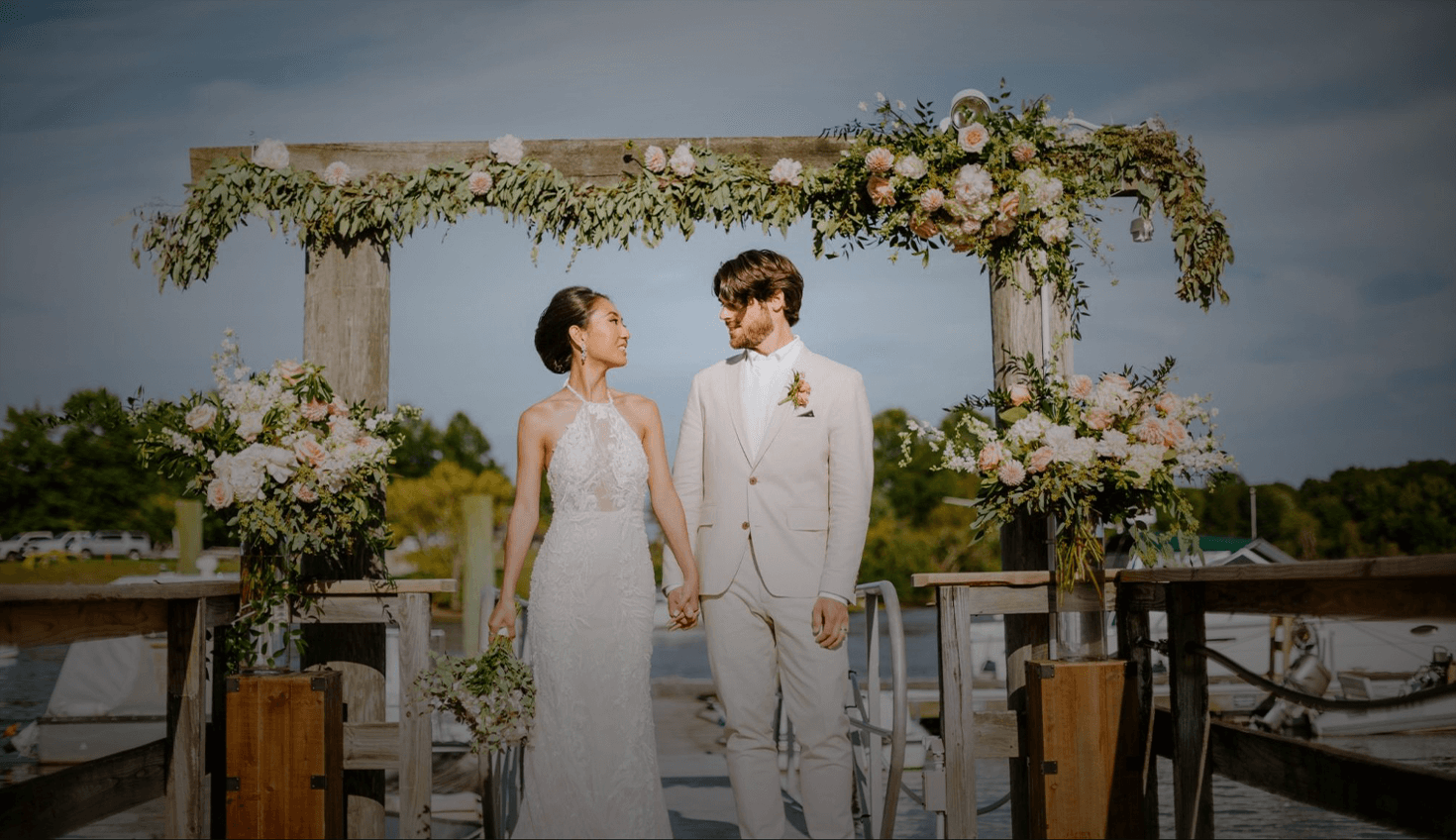 For Min Jang, a product design engineer at Apple, and Hunter Normandeau, a mechanical engineer at Tesla, tackling big projects comes naturally. Building things from scratch doesn’t scare them off – especially if it’s for their wedding.

“They're definitely very DIY-oriented,” says Andrew Holmes, a mutual friend and fellow engineer. “They definitely enjoy finding a passion project and pursuing it.”

The project included building a light marquee, crafting wooden lanterns for the dinner tables, and designing an exact digital replica of the wedding venue, which, in real life, was held at the Southend Yacht Club in Portsmouth, New Hampshire.

The right tools, like a flexible computer-aided design (CAD) platform, and access to a CNC router as well as a machine shop owned by Hunter’s father, and some good friends helped Min and Hunter plan the wedding.

“It turned out picture-perfect. What was CADed was as pictured,” Min says.

Min, Hunter and their friend Andrew graduated from Franklin W. Olin College of Engineering, in Needham, Massachusetts. But the trio didn’t meet in a traditional way.

In 2015, Hunter and Andrew were roommates, and Min was their neighbor. During orientation week, Min’s roommate locked herself out of the room and despite her knocks, Min, a self-reported heavy sleeper, didn’t wake up. Other students emerged from their rooms to see what the ruckus was, including Andrew and Hunter.

When a campus officer came and knocked on the door loudly with his baton, Min finally emerged from her slumber to let her roommate back in – and in doing so informally met her neighbors.

“I was friends with them both from that point, and then a third wheel from before I even knew I was the third wheel, onward throughout the rest of Olin,” says  Holmes, who is now a product designer at Onshape.

Taking on Wedding Design from a Distance

Min and Hunter live in Sunnyvale, California. The distance from their home and the wedding venue in New Hampshire presented challenges.

“The hard thing about planning a wedding from the other coast is that you don't have anything to look for scale,” Min says.

When Min was working on designing the wooden lanterns, sizing them became an issue until she realized she could build out the entire venue space within CAD.

It only grew from there.

The wooden lantern design grew to include tables, lighting and the tent – all created in Onshape. (Courtesy: Min Jang)

“I have this capability of creating these in virtual space, having all the dimensions, and then I can design my wooden lantern around that,” Min says. “I modeled all 12 tables. Then I thought, ‘Let's model the head table with the white tablecloth over the tables.’”

“Then the next thing that I modeled was the aisle because I also wanted to see how the chairs would go with the flowers on the sides with the arbor,” she explains. “And figuring out how much space there would be for the aisle if there were two chairs on each side or one chair on each side.”

By the end of it, the reception area, the aisles and the dance floor were all mocked up using Onshape. The Bill of Materials was used too, in a way, to keep track of the number of tables and chairs needed to make it all possible. They were also able to calculate costs.

Weeks before the wedding, the designs were ready to be created. Andrew picked Min and Hunter up from the Boston airport. They set out to make the virtual venue a reality.

The trio rented a Home Depot truck, bought the materials and headed to Olin College to cut out the wooden lanterns and marquee. A former professor allowed them to use the college’s machine shop, as long as the liability waivers were signed.

“When we were in school, we were always in the shop area,” Andrew says. “So I was totally down to have a reunion back at school.”

The designers cut pieces using the CNC router, and it was then time for assembly back at the machine shop owned by Hunter’s father.

“We had our little assembly line going with the basic setup for these candleholders. And that was awesome,” Andrew recalls.

It took about three days to build everything and about a month of CAD work.

In April 2020, Hunter’s mother, Robin, fell ill, prompting the couple to make emergency travel arrangements to get to New Hampshire from California at the onset of the coronavirus pandemic.

Shortly after, Hunter’s mother passed away.

At the family home, Hunter and Min began to discuss their future together.

“He told me that one of the last things that he told his mom was to not worry about him because he's going to get married to me and have a happy life,” Min says.

Min and Hunter were married on September 11, 2021, on a sunny New England morning

“Everyone said, you know, the weather and everything was perfect. That it was probably his mom watching over us and helping us have a perfect event,” Min says. “There wasn't a single thing that went wrong. It was literally the perfect day.”

A seat reserved for Hunter’s mother, who died a year before the wedding. (Courtesy: Min Jang)

Their wedding was the first time the family was able to gather after Robin passed, making it a bittersweet event for everyone present. Min said the wedding was more special because it brought everyone who loved Robin together.

“They were actually saying that there was a bird that flew in for the ceremony and was chirping right up leading up to the ceremony,” Min says. “Then as soon as the ceremony started it watched the ceremony and flew away as we walked down that aisle. They were like, ‘That probably must have been Robin.’”