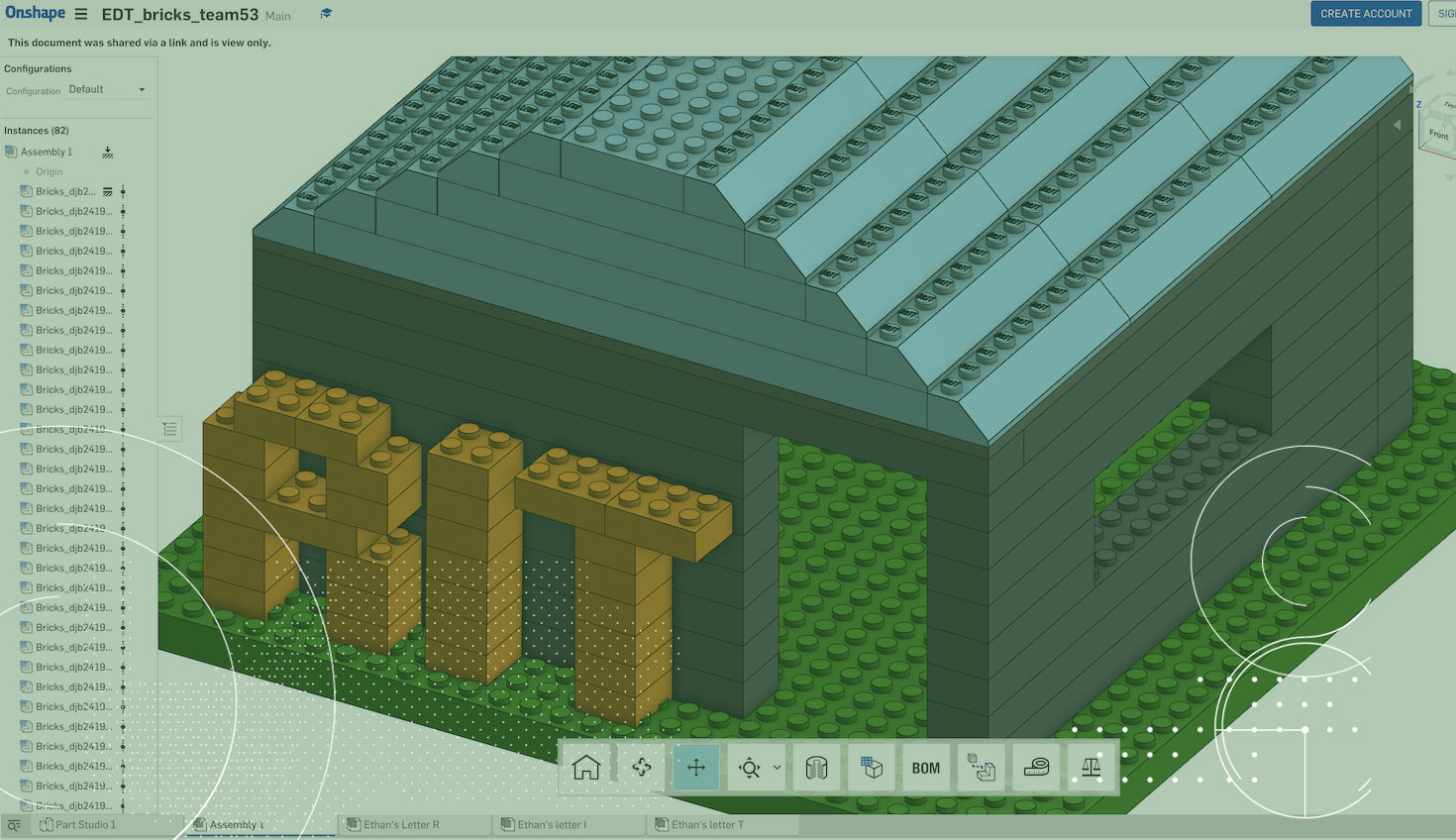 Kate Leipold stops in mid-sentence during a Zoom call to grab something round and orange off a shelf behind her. She lifts her palm to bring a small 3D-printed pumpkin into focus, then turns it by the stem to reveal the initials “RIT” recessed into one side.

The pumpkin is one of the projects her Engineering Design Tools class at Rochester Institute of Technology (RIT) undertakes each fall, using sweeps and blends and shells. The finished product is designed to sit atop an LED tea light.

“We don’t do all fun stuff,” she insists at first, but then shrugs and smiles. “I like having fun.”

Embedded in the fun is an introduction to Onshape, the collaborative, cloud-based product design platform some affectionately call the “Google Docs of CAD.” Students upload their designs into a virtual pumpkin patch and then use Onshape’s Comments feature to share praise and constructive critiques of each other’s pumpkins. 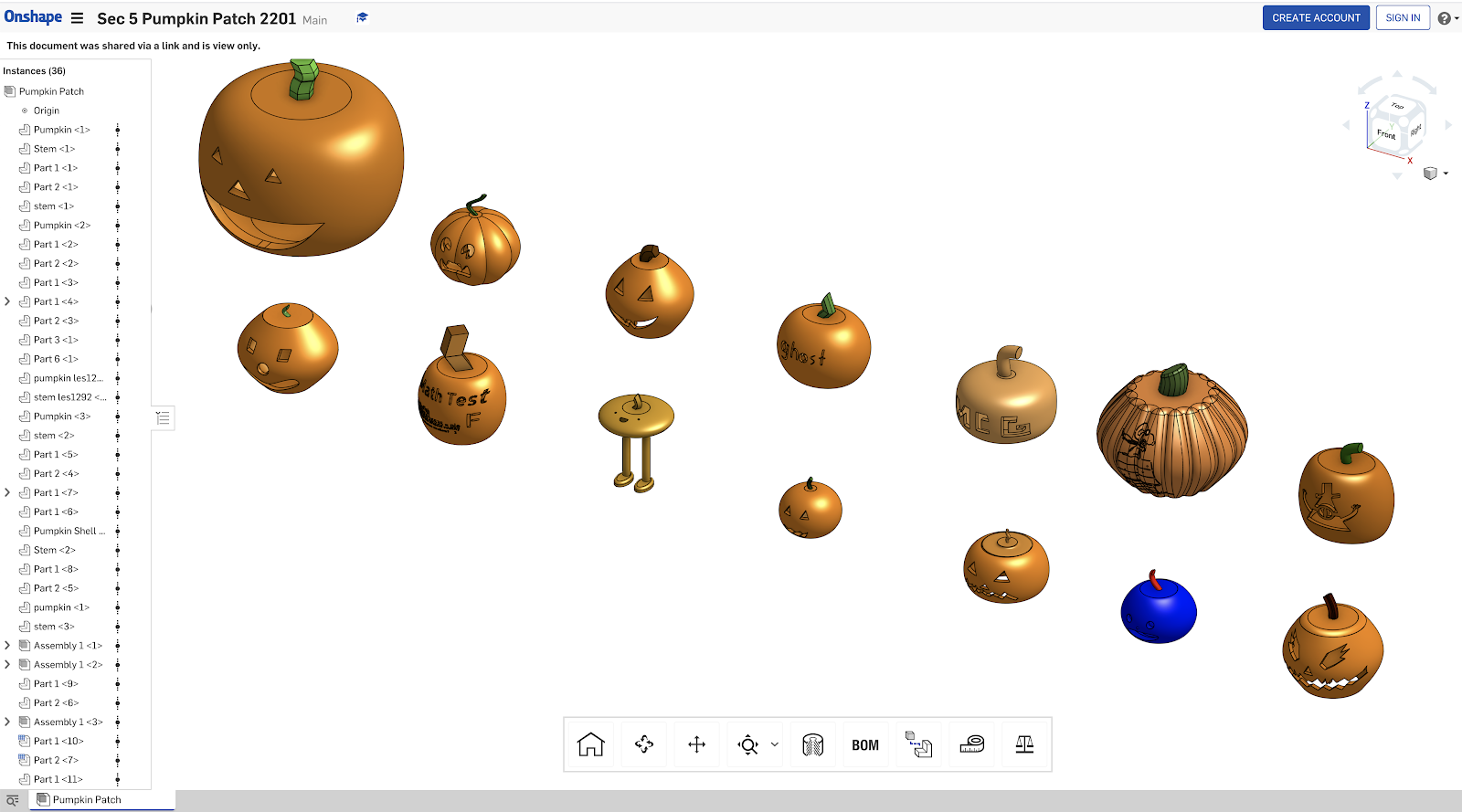 The three-credit course is required for all mechanical engineering students at the Kate Gleason College of Engineering. In addition to teaching CAD, the class introduces them to designing, building and working in a machine shop. Some of the 210 first-year students arrive armed with experience from prior engineering classes in high school, but others are starting from scratch.

Leipold credits RIT’s Co-op Program for attracting highly motivated students who want to get hands-on, industry experience as a component of their education, as it also is what drew her to Rochester in the first place. The senior lecturer not only received both her bachelor’s and master’s of science degrees from RIT, she also did five co-ops at five different companies there. After graduate school, Leipold became a new product development engineer at a food packaging company, where she designed a new kind of foam takeout container -- “every girl’s dream,” she says wryly. The innovation earned her an award in the U.S. and Canada, and by the time she left the industry, she had four patents to her name. 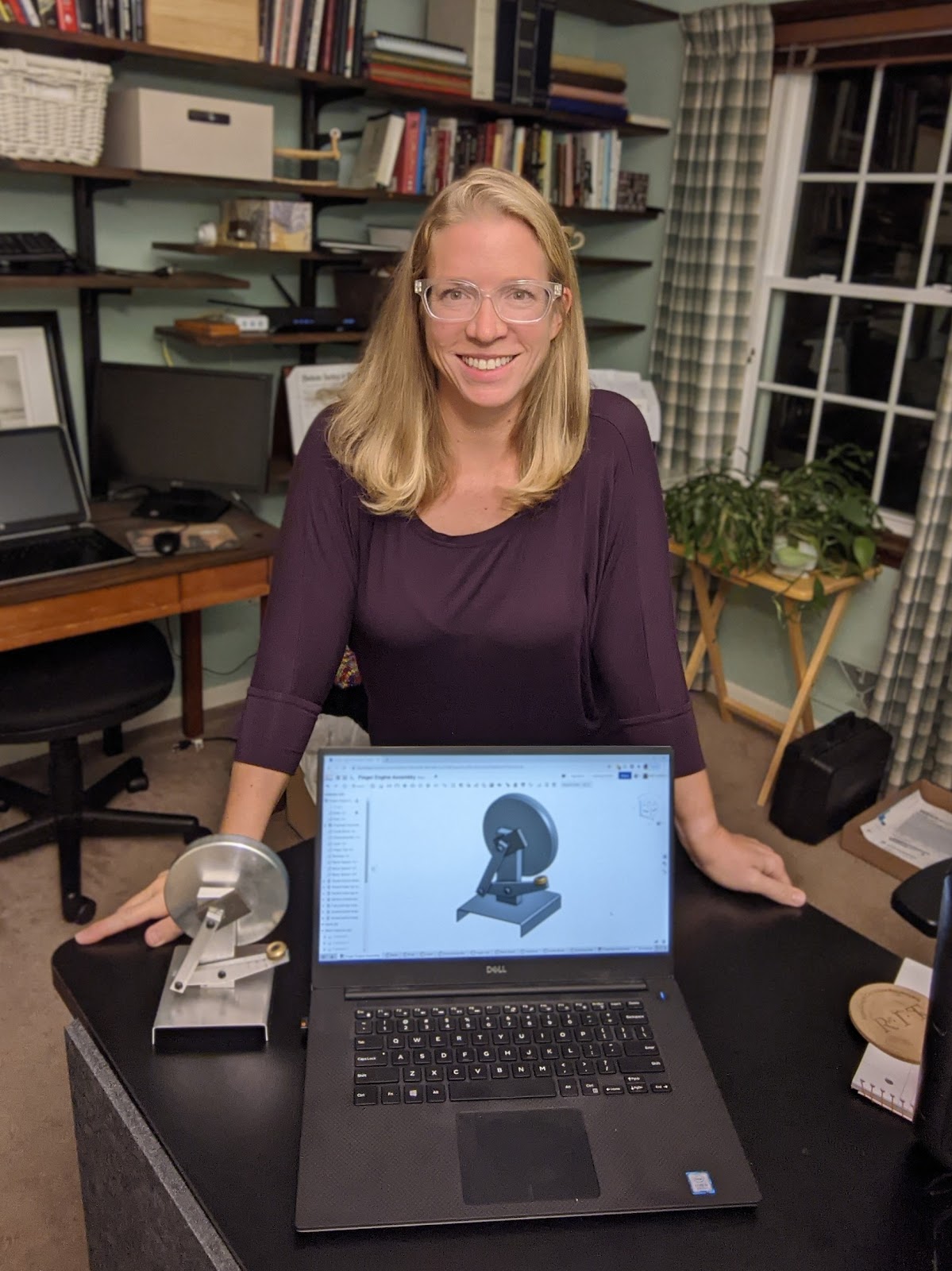 Kate Leipold, a senior lecturer in RIT’s Department of Mechanical Engineering, finds Onshape to be an essential platform for teaching her engineering courses remotely.

Having previously taught with a traditional on-premise design platform, Leipold initially explored switching to cloud-based Onshape because she wanted to give her growing number of Mac-using students the same easy access to CAD as those who used PCs. File-based on-premise CAD systems cannot run on a Mac without first installing virtualization software. In contrast, Onshape runs in a browser on any computer (PC, Mac, Chromebook) or through a mobile app (iOS or Android) and requires no additional IT overhead. Students are up and running right away.

Although improved CAD accessibility was the original attraction, it was Onshape’s real-time collaboration features that got her hooked, Leipold says. Unlike installed on-premise CAD systems, Onshape allows multiple students to simultaneously work on the same 3D design, seeing each other’s changes as they happen as if they were looking over each other’s shoulders.

“We probably couldn’t do half of the CAD designs and projects that we do if we didn’t have Onshape,” Leipold says. “Being able to work with other people at the same time is incredible. It makes group projects so much easier and faster.”

The collaborative nature of Onshape has proven to be especially invaluable during the COVID-19 pandemic, which has forced Leipold to teach her classes remotely. One of the first group assignments that her Engineering Design Tools students tackle is “The Brick Project,” inspired partly by a certain Danish company’s signature toy and partly by the upstate New York campus itself.

“RIT’s the land of the bricks. All of our buildings are brick,” she notes.

Though the assignment requires her students to complete one version of a model, Leipold encourages students to experiment and “get carried away” with multiple iterations in the design process.

Olivia Meyers, a first-year student from Austin, Texas, did find herself getting carried away.  Although the group project requirements were to use 15 different bricks and three different styles, Meyers’ team ended up with eight different styles using more than 60 bricks. “I just kept going,” she says, referring to their 3D model of a two-story house. “We added a tree and a fence and kind of went crazy. It was really fun. I definitely spent more time than I needed to on it.” 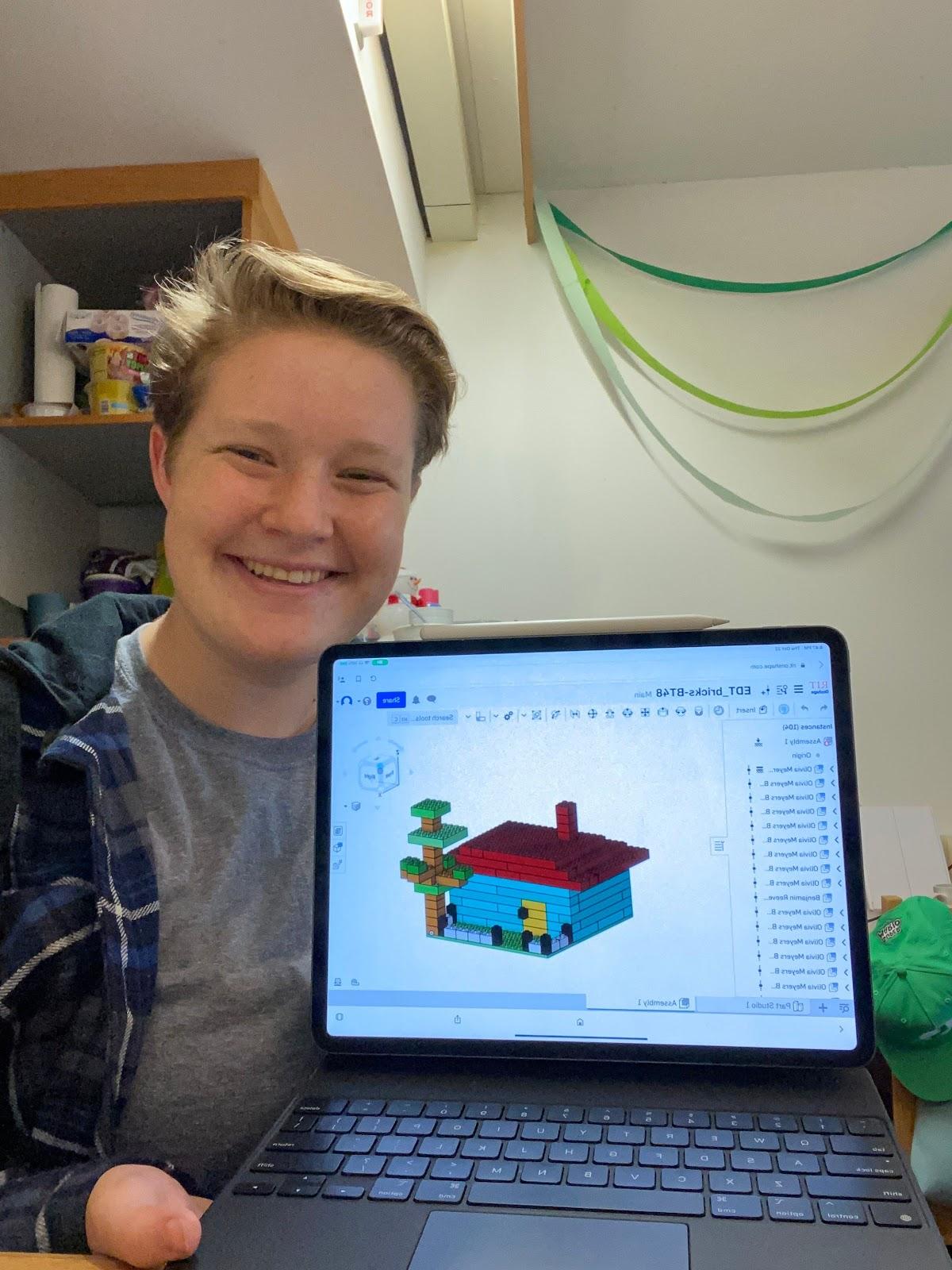 Olivia Meyers, a first-year mechanical engineering student at RIT, already runs her own custom design and 3D-printing business on the side.

For Meyers, the best part was being able to see her peers’ work in real time. “As everyone is working on their own little aspect of the project, you can see the updates,” she says. “Once a member adds a part to the group assembly, others can work with that part and move it around. It’s really, really collaborative and you can all work together.”

Outside of class, Meyers has already started her own custom design and 3D printing business, creating fidget cubes, sculptures and other items. Although a few years away from entering the workforce full time, the engineering student hopes to follow in her mother’s footsteps and work in an R&D innovation workshop. “I would love to work somewhere like that, where you’re just inventing, you’re creating, you’re innovating to help people make new products,” she says. “I think that’s such a fun and exciting job.”

Onshape isn’t just helping students collaborate with each other. It also has enhanced how Leipold remotely conducts office hours with her on-campus students. Instead of flat interactions with a face on a screen, Leipold asks students to share the URL of the Onshape project they have been working on. “I'll go in and I'll watch what they're doing or I'll say, ‘Hold on and let me show you what I mean,’ and I can go in and they can see exactly what I'm doing,” she says.

This unique Follow Mode feature has been especially useful to the school’s deaf and hard-of-hearing students from the National Technical Institute for the Deaf who consume Leipold’s lectures. If a student has to watch Leipold’s projector and the interpreter and their screen, they are only getting a third of the content she is presenting. But in the Zoom world, those students can watch Leipold’s screen with an interpreter set in the corner and have a recording to review later.

In addition, Onshape helps educators see how effectively student teams are working together on group assignments. A comprehensive Edit History tracks who made what design change and when – allowing educators in an instant to determine if a project was completed with multiple contributors or if the work was disproportionately driven by one or two students.

The Edit History also allows users to instantly revert back to any earlier stage of the design, allowing teachers to help students retrace their steps and better explore how to correct mistakes.

Embracing Forward-Thinking Technology in the Classroom

One of the things about Onshape that Leipold says she regards as most valuable is the platform’s regular cadence of automatic CAD and data management upgrades in the cloud. Users do not need to download or install anything to use the latest Onshape features and enhancements the moment they are released.

This is in contrast to the once-a-year product updates and bug fixes offered by most on-premise file-based CAD systems, which must be installed individually on every student’s hard drive.

“Every three weeks the new Onshape updates are just blowing my mind left and right,” Leipold says. “It's amazing to see. In contrast, the legacy CAD systems are all built on decisions that were made 30 years ago and they have to keep living with them.”

“I want to be teaching my students the bleeding-edge stuff,” she adds. “I want them to be working on the modern platform that keeps moving forward.”

**
Learn more about how your school or university can take advantage of PTC’s free Onshape Education Standard Plan for improving classroom collaboration and remote learning.